METHODS: A total of 75 patients (40 female, 35 male) who were diagnosed between January 2002 and July 2004 as having BCS were studied prospectively. Findings from on physical examination, ultrasonography, duplex ultrasonography and venography were analyzed. Hemogram and blood chemistry were studied at the time of diagnosis and on each hospital visit. Bone marrow examination and immune phenotyping were performed by a hematologist when necessary. Protein C, S, antithrombin III, activated protein C resistance, and anticardiolipin antibodies, antinuclear antibodies, and anti ds-DNA were studied twice. The presence of ascite, esophageal varices, and portal thrombosis were evaluated at admission and on every visit.

RESULTS: At least one etiological factor was determined in 54 (72%) of the patients. The etiology could not be defined in 21 (28%) patients. One etiological factor was found in 39, 2 factors in 14 and 3 factors in 1 patient. The most common cause was the web (16%), the second was Hydatid disease (11%), the third was Behcet’s disease (9%). Portal vein thrombosis was present in 11 patients and at least one etiology was identified in 9 of them (82%).

CONCLUSION: Behcet’s disease and hydatid disease are more prominent etiological factors in Turkey than in other countries. Patients with web have an excellent response to treatment without signs of portal vein thrombosis while patients having thrombophilic factors more than one are prone to develop portal vein thrombosis with worse clinical outcome.

Budd-Chiari syndrome (BCS) is a rare heterogeneous group of disorders characterized by hepatic venous outflow obstruction at the level of hepatic venules, the large hepatic veins, the inferior vena cava, or the right atrium[1]. It has been increasingly recognized that a combination of several thrombogenic conditions and triggering factors are necessary for the development of venous thrombosis in general and hepatic vein or cava thrombosis in particular.

The etiology of Budd-Chiari syndrome changes according to geography. In most of the western cases of BCS an etiologic factor has been defined, whereas the causes of BCS in many of patients from India and Japan are not defined[2–6]. While thromboses are more prominent in the west, webs are prominent in the east and in Japan[7–9].

Turkey is a country acting as a bridge in between east and west. To date there is insufficient data about the etiology and features of BCS in Turkey. The relation between the etiologic factor and presence of portal vein thrombosis and yet outcome is not well established to date. In this study we prospectively searched the etiology, characteristics and other features of BCS patients in Turkey.

The diagnosis of BCS was established using ultrasonography, color Doppler ultrasonography (CDU) and venography. A detailed patient history including onset of symptoms, medications, previous disease, pregnancy and use of oral contraceptives for women, oral and genital ulcers, previous surgery, and trauma were especially noted. The onset of symptoms was classified, whether acute, sub acute or chronic. The diagnosis and date of last hospital visit were noted.

Patients were evaluated with a multidisciplinary approach (involving gastroenterology, gastroenterology surgery, hematology, radiology and other clinics when necessary). Findings on physical examination were noted. Ultrasonography was performed by experienced gastroenterologists and CDU and venography were performed by experienced radiologists. The sites of lesions were classified as hepatic vein, inferior vena cava or combined and note was also taken as to whether the obstruction was complete or partial.

Hemogram and blood chemistry were studied at the time of diagnosis and on each visit. All patients were evaluated by a hematologist for myeloproliferative disorders and bone marrow examination and immune phenotyping were performed when necessary. Protein C, S, antithrombin III, factor V Leiden mutation, and anticardiolipin antibodies were studied twice in suitable conditions. Antinuclear antibody and anti ds-DNA were studied when systemic lupus erythematosus was suspected.

The presence of ascite, esophageal varices, and portal vein thrombosis was evaluated at admission and on every visit. Treatments were classified as conservative management, anticoagulation, angioplasty, TIPS and surgery. Complications that occurred during the follow up were recorded.

Variables between groups were compared using the Mann-Whitney U test, correlations between parameters were tested by Spearman’s correlation analysis and the “Statistical Package for Social Sciences 10.0” program was used for statistical analysis. P < 0.05 was considered as statistically significant. 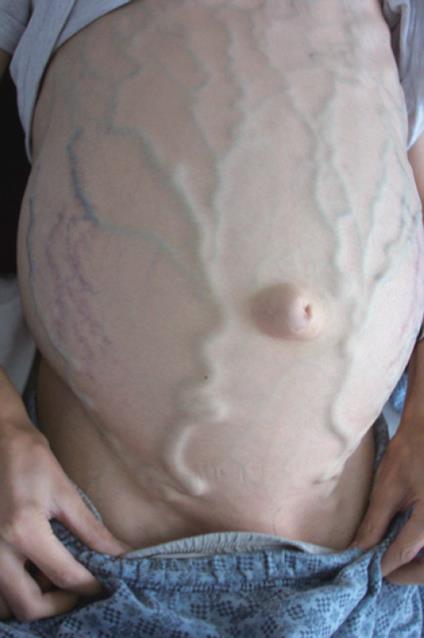 Figure 1 A patient with prominent abdominal wall collateral veins as a result of inferior vena cava thrombosis at the hepatic portion.

Laboratory parameters at admission and at the last hospital visit are presented in Table 2.

No differences were observed when patients were compared according to sex or age over or less than 35 years old.

When compared by means of the extent of the obstruction, patients with complete obstruction had lower initial albumin levels (3.2/3.7, P = 0.007) and higher prothrombin times (19 s/14 s, P = 0.001). No other significant difference was found between other parameters.

Patients were treated conservatively (53%), with balloon angioplasty (24%, Figure 2), oral anticoagulation (17%), TIPS (4%) or surgery (7%). Three patients experienced warfarin related complications (2 intracranial bleeding, one of whom died, 1 intra abdominal bleeding). Three of the patients who underwent surgery died because of liver failure. The balloon angioplasty procedure was performed in 18 patients and failed in 6 of them. When we examined the patients where it was unsuccessful it was found that none of them were webs but, rather, long segment caval thrombosis or hepatic vein thromboses. Two of the 12 successful web dilatation patients later developed thrombosis and one underwent surgery, the other was treated with TIPS procedure.

Figure 2 A patient with web in the right hepatic vein before angioplasty (A), during angioplasty (B) and after dilatation of the web (C).
DISCUSSION

The prevalence of underlying thrombophilias is markedly increased in patients with BCS. Factors that confer a predisposition to the development of BCS including hereditary and acquired hypercoagulable states and a variety of other causes can be identified in about 75 percent of patients[1]. In our study we identified at least one etiological factor in 54 (72%) patients. The presence of multiple causes in the same patient is increasingly recognized[3]. We identified 2 etiological factors in 14 and 3 factors in 1 patient. These results were similar with reports in the literature.

There were slightly more female patients than males (40 vs 35) but the imbalance was not as marked as in the literature (2/1)[10]. This may be due to the less frequent use of oral contraceptives in Turkey. Mean age at the time of diagnosis was 33.

The site of the lesion varies according to geography. In our patients hepatic veins were involved in 77% and the inferior vena cava was involved in 53% of the patients. While inferior vena cava involvement is more prominent in Nepal, South Africa, China, India and Japan, hepatic vein involvement is more prominent in the western countries[711–13]. Our results lay in between these, but were closer to the western countries.

Webs were the most common etiology and the most easily treated lesions in our patients (16%). This ratio is not as high as in eastern countries but higher than in western ones. It may be another indicator of Turkey as a bridge between east and west. These patients rapidly responded to balloon dilatation and ascites dramatically disappeared after successful dilatation. None of these patients had portal vein thrombosis. The chances of a patient with BCS may depend on a web etiology. The etiology of BCS is the most important factor for the prognosis.

The second most frequent etiology in our study was Hydatid disease, at 12%, and this is the highest ratio in the literature. Hydatid disease is a common health problem and deserves more interest in Turkey. Half of the patients with BCS and Hydatid disease also had portal vein thrombosis.

Another frequently observed etiology was Behcet’s disease with a ratio of 9%. This ratio is also the highest ratio in the literature. Every patient with BCS must be closely questioned for any history of Behcet’s disease. The difficulty in managing these patients was that they usually had long segment thrombosis and thrombosis of other vascular structures. While Bayraktar has reported portal vein thrombosis in these patients, another interesting observation is that none of our patients with Behcet’s disease and BCS had portal vein thrombosis[17]. This might be due to Bayraktar’s long term follow up period. Other etiological factors were similar with the literature.

Ascites was present in 84% of the patients at admission which means that most of the patients were diagnosed when symptomatic. This ratio lies between the ratio of before and after the 1990 results of Hadengue, indicating that we should diagnose more asymptomatic patients[10]. With an increased knowledge about BCS, patients can be diagnosed earlier and further development of new thrombosis and deterioration of liver functions can be prevented. In patients with poor liver functions surgery is unsuccessful, and this may be due to lack of experience as well as to a very enlarged liver that causes difficulty during surgery.

In conclusion, the etiology of BCS changes according to geographic region. Webs, Behçet’s disease and Hydatid disease are more prominent etiological factors in Turkey which sets it apart from other countries. Complete obstruction of hepatic veins or inferior vena cava and presence of portal vein thrombosis affects the course of the disease. Presence of more than one prethrombotic factor increases the risk of portal vein thrombosis. Patients with web have excellent treatment response and prognosis.

The present research studied cases with BCS, but the follow up period was not long enough and some etiological factors such as JAC2 V617f mutation was missing.

This paper clearly defines that initially the extent of thrombosis and etiology and lately portal vein thrombosis are important factors for BCS. The results are valuable.