AIM: To study the expression of the inhibitor of apoptosis protein survivin in hepatocellular carcinoma (HCC), and its correlation with clinicopathological factors, cell proliferation, recurrence and prognosis after hepatectomy.

METHODS: Immunohistochemical staining of survivin and Ki-67 was performed by the standard streptavidin-peroxidase technique on paraffin sections of 55 cases of HCC.

CONCLUSION: Survivin may play an important role in progression of HCC by promoting cell proliferation, and may be positively correlated with high risk of disease recurrence and poor prognosis in HCC. Its expression may serve as a prognostic factor for patients with HCC after hepatectomy.

Although surgical resection is the most important method for hepatocellular carcinoma (HCC), the recurrent rates may be as high as 50% at 2 years after hepatectomy[1]. The recurrence of HCC may be related to a variety of factors, including biological markers. Molecular prognostic markers are likely to be of greatest benefit in the effective management of patients with HCC, however, these factors have not yet been sufficiently defined in patients with a high risk of cancer recurrence.

Survivin is a recently described member of the family of inhibitor of apoptosis proteins (IAPs). Recently, it has been shown that survivin is strongly associated with apoptosis, cell proliferation and cell-cycle control[2-5]. Survivin plays a crucial role in the genesis and progression of malignancy and is an important prognostic parameter in tumors[6-10]. This study investigated the expression of survivin in HCC and its correlation with clinicopathological factors, cell proliferation and prognosis.

Tissue samples were obtained between December 2000 and December 2003 from 55 patients with HCC (41 men, 14 women; 24-74 years old, mean age, 48.65 years). There were 27 patients with stageI-II, and 28 with stage III-IV cancer. None of the patients received radiotherapy, chemotherapy or immunotherapy before surgery.

Intensity and percentage of positive cells were used to evaluate each tissue section. The mean percentage of positive tumor cells and normal epithelial cells in at least five areas at × 400 magnification was determined and assigned to one of five categories: 0, < 5%; 1, 5%-24%; 2, 25%-49%; 3, 50%-74%; and 4, ≥ 75%. The intensity of survivin immunostaining was scored as 0 (achromatic), 1 (light yellow), 2 (yellow), and 3 (brown). The percentage of positive cells and staining intensity were multiplied to produce a weighted score for each case. Cases with weighted scores < 1 were defined as negative; all others were defined as positive.

Determination of the Ki-67 proliferation index

At least five high-power fields were chosen randomly in each section, and 500 cells were counted for each field. The Ki-67 proliferation index was defined as the number of Ki-67-positive nuclei divided by the total number of colorectal cancer cells counted, and was expressed as a percentage.

The survival curves were assessed by the Kaplan-Meier method and compared by a log-rank test. The χ2 test was performed for enumeration data comparison, and the t test was used for comparison of measurement data. P < 0.05 was considered statistically significant. All data analysis was performed with commercially available statistical analysis software packages (SSPS 11.5, SSPS, Chicago, IL, USA).

RESULTS
Relationship between expression of survivin and clinical pathology

Survivin protein expressed as brown-yellow particles in the cytoplasm after staining, and only one expressed both in the cytoplasm and nucleus after staining. The positive staining rate for survivin in the cytoplasm and nuclei was 29/55 (52.7%) (Figure 1). There was a significant correlation between survivin expression and portal vein thrombi and intrahepatic metastatic nodes (P < 0.05). However, it was not related to the following factors: age and sex of the patient, tumor location, tumor differentiation, tumor size, presence of tumor capsule, clinical stage, complicating liver cirrhosis, preoperative alpha fetoprotein (AFP) level, and hepatitis B surface antigen (HBsAg) (Table 1). These findings suggest that the expression of survivin may be significantly associated with metastasis.

Ki-67 showed as brown-yellow particles in the nuclei after staining. Ki-67 labeling index in survivin-positive cancer was 33.83% ± 18.90%, while it was 19.60% ± 19.35% in negative tumor. The difference was significantly different (P < 0.05). This suggests that the expression of survivin may promote the proliferation of HCC.

Relationship between expression of survivin and recurrence and prognosis of HCC 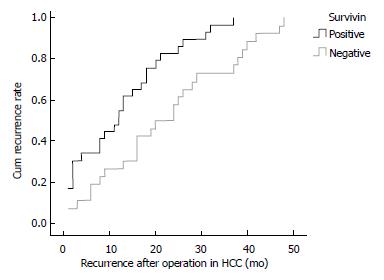 Figure 2 Correlation between survivin expression and recurrence rate of HCC after hepatectomy. 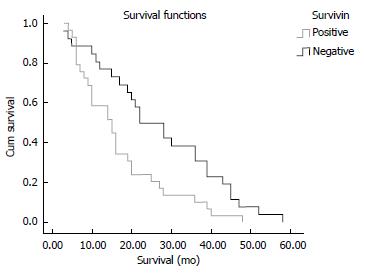 Figure 3 Kaplan-Meier curves for overall survival rates of patients with HCC according to survivin expression.
DISCUSSION

Among the recently described IAP family, survivin is characterized by a unique structure with a single BIR and no zinc-binding domain[11], and is undetectable in terminally differentiated adult tissues, but becomes notably expressed in the most common human cancers, including esophageal, stomach, colorectal, breast and pancreatic carcinoma[12-16]. Survivin has also been implicated in the control of cell-cycle kinetics and inhibition of apoptosis[17-19].

In our current study, we demonstrated that the expression of survivin was detected in 52.7% of patients with HCC, mainly localized in the cytoplasm of the carcinoma cells, with rare appearance in the nucleus. On the other hand, there have also been reports of a nuclear presence of survivin in HCC[20,21]. In previous studies, immunohistochemical analysis or RT-PCR of surgically resected tissues has revealed that approximately 30%-90% of HCC are positive for survivin expression[22-26]. The reasons for the difference may be the following: during the cell-division cycle, mRNA expression for survivin is extremely low in the G1 phase, and in the S phase is six times higher, while in the G2/M phase, the expression level of survivin increases suddenly to be 40 times higher than that in G1[27]. Therefore, the tumor cells in the G1/S phase may represent negative expression, which would lead to different expression rate of survivin in different study. On the other hand, different criteria for positive expression of survivin or experimental methods may explain the different expression rates of survivin.

Ki-67 is considered to be more useful for the deter-mination of the proliferative activity of HCC, and is known as a risk factor for HCC. In our study, we surprisingly found that expression of the proliferation index in survivin-positive HCC was higher than that in survivin-negative HCC. The results suggest that survivin may promote cell proliferation, and contribute to the development of HCC. Survivin may interact with the cell-cycle regulator Cdk4, which leads to Cdk2/cyclin E activation and Rb phosphorylation. As a result of survivin/Cdk4 complex formation, p21 is released from its complex with Cdk4 and interacts with mitochondrial procaspase-3 to suppress Fas-mediated cell death. Survivin can also inhibit the activity of caspase-3/7 directly or indirectly, and this results in the generation and development of HCC[28-30]. The up-regulated expression of the proliferation index in survivin-positive HCC also suggests that survivin plays an important role in tumor progression.

The survivin expression in HCC was significantly correlated with portal vein thrombi and intrahepatic metastatic nodes. Therefore, survivin may play an important role in the development of HCC. Compared to survivin-negative HCC, survivin-positive HCC had a higher recurrent rate and lower 1- and 3-year survival rates. Survivin expression may play a role in the tumor biological characteristics of HCC, and may be a prognostic factor after hepatectomy. The study by Ikeguchi et al has also shown that high expression of survivin is associated with high recurrence and low survival rates[23]. Normal shedding of cells initiates the apoptosis process, but the over-expression of survivin exerts an anti-apoptotic effect, which leads to a high rate of cell proliferation. Therefore, survivin may play an important role in the progression of HCC and may facilitate metastatic spread via the blood stream.

Survivin is a recently described member of the family of inhibitor of apoptosis proteins (IAPs). It has been shown that survivin is strongly associated with apoptosis, cell proliferation and cell-cycle control, and becomes markedly expressed in the most common human cancers.

Immunohistochemical staining of survivin and Ki-67 was performed by the standard streptavidin-peroxidase (SP) technique for paraffin sections of hepatocellular carcinoma (HCC) tissues.

Survivin may play an important role in progression of HCC by promoting cell proliferation, and may be positively correlated with a high risk of disease recurrence and poor prognosis in HCC. Its expression can serve as a prognostic factor for patients with HCC after hepatectomy.

This is an interesting correlative study of survivin expression and survival in a cohort of 55 patients. A significantly worse survival was observed in surviving-positive tumors. The data are of high quality.