AIM: To study the effects of endogeous nitric oxide induced by 5-fluorouracil (5-FU) and L-arginine (L-Arg) on the human liver carcinoma model in nude mice.

METHODS: The human liver carcinoma model in nude mice was established with BEL-7402 cells and normal saline (NS), 5-FU and 5-FU + L-Arg injected intraperitoneally. The tumor size was measured. The necrotic degree and range were observed under microscope. The apoptosis of cancer cell was detected by turmina deoxynucleotidyl transferanse mediated dUTP nick end labeling (TUNEL) method. Immunohistochemical method was performed to determine the expression of iNOS, P16, BAX. The chemical colorimetry was used to test the activity and nitrate reductase method was adopted to test the concentration of nitric oxide (NO) in the tumor tissue. The BI2000 pathological image analyzer was used to analyze the result of immunohistochemistry.

CONCLUSION: 5-FU combined with L-Arg can inhibit the growth of tumor in nude mice. The effect may be related to inducing the synthesis and increasing the activity of iNOS. The production of NO is increased, and it can enhance the expression of apoptosis-related gene and antioncogene.

Over the past decade or so, it has become evident that free radical gas nitric oxide acts as a novel transcellular messenger molecule in many key physiological and pathological processes. It appears that high levels of nitric oxide (NO) may be cytostatic or cytotoxic for tumor cells[1,2]. NO is a small gaseous molecule generated in a wide variety of cells as a product of the conversion of L-arginine into L-citrulline by the enzyme nitric oxide synthase (NOS). There have been few reports about the antitumor effects of endogenous nitric oxide in vivo[3,4]. In this study, we observed the inductive effects of 5-fluorouracil (5-FU) and L-arginine (L-Arg) on the endogenous nitic oxide in the human live carcinoma model in nude mice and proved the antitumor effects of the endogenous nitric oxide in the primary hepatic carcinoma and found effective adjuvant for 5-FU.

BEL-7402 cells were cultured in vitro to the log growth phase, centrifuged and washed with PBS to a concentration of 1 × 107/mL, and 0.2 mL cell solution was subcutaneously xenografted in the neck or the flank of 4-6 wk old male Balb/c nude mice. The mice were housed and maintained in lamina flow cabinets under specific pathogen-free conditions. Ten day after establishment of the model when tumors reached a mean diameter of 0.5 cm, mice were randomly divided into three groups (10 mice per group) and treated as follows: group A was injected intraperitoneally with 0.2 mL normal saline, group B was injected with 5-FU at a dose of 20 mg/kg, and group C was injected with 5-FU at 20 mg/kg and L-Arg at 100 mg/kg. The drugs were injected every other day from d 11 to d 15. The mice were killed at 17d after the experiment finished.

The largest diameter (a) and its vertical diameter (b) of the tumors were measured with caplipers every two days after the tumor appeared. The volume of tumor was equal to 1/2ab2. The tumor inhibition rate (TIR) was calculated with the following formula:

Tumor specimens were dissected from mice and fixed in 10% buffered formalin solution overnight. They were then embedded in paraffin and sectioned in 4 μm thicknesses. SABC immunohistochemistry was performed according to the manufacturer’s instructions to detect the gene expression of iNOS, P16 and BAX. Briefly, the tissue sections were deparaffinized in xylene at 37°C for 20 min. Endogenous peroxide was blocked by incubating the slides with 30 mL/L H2O2 for 10 min at 37°C. Sections were incubated with primary antibodies of iNOS, P16 and BAX at 4°C overnight respectively. Staining was visualized with DAB for 10 min at room temperature. Finally, the sections were counterstained for nuclei by hematoxylin solution. The results were analyzed with a BI2000 pathological image analyzer and expressed as optical density.

iNOS activity and NO concentration assay

NOS catalyzed the formation of NO and L-citrulline from L-arginine and molecular oxygen, and NO reacted with a nucleophile to generate color compounds. The absorbance of NOS at 530 nm was calculated and expressed as U/mg protein. One unit of NOS activity was defined as the production of 1 nmol nitric oxide per second per mg tissue protein. Total NOS activity was measured as follows: 10% tissue homogenate (100 μL) was incubated with 200 μL substrate buffer, 10 μL reaction accelerator and 100 μL color development reagent at 37°C for 15 min after mixing. Then 100 μL clearing reagent and 2 mL stop solution were added, mixed and absorbances were read at 530 nm. For measuring iNOS activity, an inhibitor was added before incubation according to the manufacturer’s instructions. Total protein concentration was determined using the Coomassie blue method with bovine serum albumin as standard.

Tumor samples were thawed, weighed and homogenized 1:9 w:v in 0.9% saline. The homogenates were then centrifuged at 1000 r/min for 5 min at 4°C, the supernatant was taken for NO assay and total protein determination.

NO was assayed spectrophotometrically by measuring total nitrate plus nitrite (NO3- plus NO2-) and the stable end products of NO metabolism. The procedure was performed by the manufacturer’s instructions. Results were expressed as μmol/g protein.

5-FU could inhibit the growth of the liver carcinoma in nude mice. When the substrate L-Arg was supplemented, tumor inhibition rate increased significantly (Table 1 ).

There was different necrosis in the tumor tissues. The necrotic range enlarged greatly after treatment with 5-FU and L-Arg (Table 2). 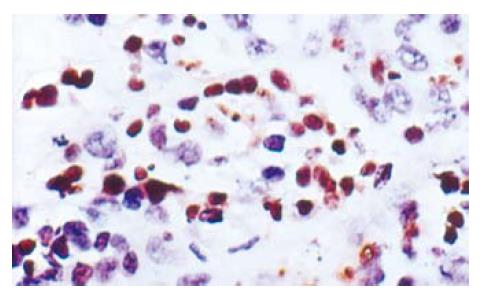 Figure 1 The apoptosis cells in tumor tissues (× 400).
iNOS activity, NO concentration and immunohistochemical results of iNOS

The optical density of iNOS, iNOS activity and NO concentration were increased after treatment with 5-FU. When the substrate L-arg was supplemented, they were increased more significantly (Table 3). The expression of iNOS is shown in Figure 2. 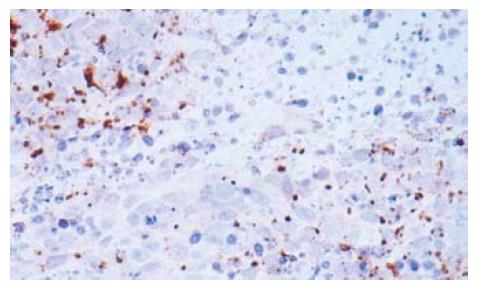 Figure 2 The expression of iNOS in tumor tissues (× 200).
Correlation analysis between concentration of NO and expression of P16, BAX

Hepatocellar carcinoma is one of the most common malignant tumors in China. Surgical resection is the best choice. But many patients could not be treated surgically when diagnosis was made too late. Chemotherapy becomes the important treatment for liver cancer[6,7]. 5-FU is used extensively in the chemotherapy of hepatocellular carcinoma[8,9]. It is well known that mechanism of the anti-tumor effects is to interfere with DNA or protein synthesis[10]. 5-FU can also induce the apoptosis of different tumor cells, but the mechanism is unclear[11,12]. Oshima T et al reported that 5-FU induced iNOS expression and NO produced by gastric cancer cells, and NO participated in antitumor activity in gastric cancer cells. These effects may be mediated by TNF-alpha production[13]. 5-FU could induce the cytokines such as interleukin-1beta (IL-1beta) and TNF-alpha[14]. Other studies showed that the iNOS expression was stimulated by interleukin-1beta (IL-1beta) and TNF-alpha[15]. So we speculated that the 5-FU might induce the iNOS by induction of cytokines. However, this need to be proved by further studies. We found that 5-FU could induce the expression of iNOS of BEL-7402 cells in vitro. When the L-Arg was sufficient, the production of NO increased obviously. It caused the increases of apoptosis and necrosis of BEL-7402 cells. NO increased the chemotherapy sensitivity of BEL-7402 cells to 5-FU[16]. In this study, the expression and activity of iNOS increased after the treatment with 5-FU and L-Arg, and the concentration of NO in the tumor tissue was increased at the same time. This suggests that the endogenous NO plays an important role in the anti-tumor effects of 5-FU and L-Arg.

The present study showed that the high concentration of NO could be cytotoxic for tumor cells or inhibit the tumor growth[17,18]. The high concentration of NO could interfere with the citric acid cycle, and arrest the cell in the S stage[19,20]. More importantly, NO has been shown to bind rapidly with high affinity to ferrous iron (Fe2+). As a consequence, NO can bind easily to free iron, iron within iron-sulphur centres, and iron within hemoproteins[21,22]. NO can cause DNA damage via the generation of peroxynitrite (ONOO-) and N2O3[23,24]. One of the consequences of the NO-mediated DNA damage is to trigger p53 accumulation, which can induce apoptosis[25,26]. NO can induce the apoptosis of tumor cell by the regulation of the apoptosis and cell cycle related protein, such as P21, BAX, cyclin D etc[27-29]. Nicola et al reported that NO mediates chemosensitivity in tumor cells, and Hypoxia-induced drug resistance appears to result, in part, from down-stream suppression of endogenous NO production. These results raise the possibility that administration of small doses of NO mimetics could be used as an adjuvant in chemotherapy[30]. In this study, the expression of P16 and BAX was found correlated with the concentration of NO, suggesting that NO can increase the expression of apoptosis-related gene and antioncogene. The necrotic range and apoptosis index increased more significantly in the 5-FU and L-Arg group than other two groups. We think that the high concentration of NO may kill the tumor cells or induce apoptosis of the tumor cells directly. On the other hand, the production of NO also improved the chemosensitivity of tumor cells to 5-FU.

L-Arg is not an essential amino acid, and it can be synthesized in the liver. However, liver function of liver cancer patients is poor, and the concentration of L-Arg in the body is likely low. When patients are undergoing chemotherapy with 5-FU, added with L-Arg to improve the production of endogenous NO in liver cancer cells may enhance the therapeutic effects and improve the antitumor ability of the patients. L-Arg may be an effective adjuvant for 5-FU.

Hepatocellar carcinoma is one of the most common malignant tumors in China. 5-FU is used extensively for the treatment of liver cancer. The effects of 5-FU alone is not satisfied. It is necessary to find the effective adjuvant for 5-FU.

The expression of iNOS in the human liver carcinoma and the effects of endogenous nitric oxide on the BEL-7402 cells have been examined.

In the present study, the effects of endogenous nitric oxide on the liver carcinoma in nude mice have been studied.

The L-Arg can be used as the adjuvant for 5-FU in the treatment of liver cancer.

L-Arginine (L-Arg) is a semi-essential amino acid that possesses numerous useful physiologic properties. NOS can catalyzethe L-Arg to form the nitric oxide. When the L-Arg is sufficient, the production of nitric oxide can be increased.

This manuscript is very interesting. The title accurately reflects the major contents of the article. The results provide sufficient experimental evidences from which conclusions are drawn. The conclusions are scientifically reliable and valuable.