We present a rare case of well- to moderately-differentiated hepatocellular carcinoma (HCC) in a 71-year-old woman with hepatitis C virus-related cirrhosis and unusual radiologic features. A 20-mm hypoechoic nodule disclosed by ultrasound in segment two showed hyperattenuation on both computed tomography hepatic arteriography and computed tomography during arterial portography. Contrast-enhanced ultrasound revealed hypervascularity in the early vascular phase and defect in the post-vascular phase, with the same pattern detected by the two imaging techniques. SPIO-MRI revealed a hyperintense nodule. These findings were compatible with those of moderately-differentiated HCC. An ultrasound-guided biopsy showed histological features of well- to moderately-differentiated HCC characterized by more than two-fold the cellularity of the non-tumorous area, fatty change, clear cell change and mild cell atypia with a thin to mid-trabecular pattern. Further studies may provide insights into the correlation between tumor neovascularity in multistep hepatocarcinogenesis and dual hemodynamics, including the artery and the portal vein.

Recent advances in imaging have enabled clinicians to identify not only advanced HCC but also dysplastic nodules or early hepatocellular carcinoma (HCC). Moreover, clinicians can now obtain images by CT hepatic arteriography (CTA) and CT during arterial portography (CTAP) concurrently, and can evaluate the hemodynamics of lesions preoperatively[1,2].

To determine the treatment of choice for HCC, examinations by both CTA and CTAP are indispensable because of the high sensitivity of CTAP in detecting hepatic lesions and the capability of CTA of characterizing them. Moderately-differentiated HCC is generally demonstrated as a perfusion defect on CTAP and as an enhanced area on CTA, principally because of the reciprocal blood flow of these two features. We investigated a case of well- to moderately-differentiated HCC, manifesting hyperattenuation on both CTA and CTAP.

A 71-year-old woman with hepatitis C virus (HCV)-related cirrhosis was admitted to Kobe Asahi Hospital in January 2007 for further examination of a 20-mm hypoechoic nodule in segment two (S2). She had no history of alcohol, blood transfusion, or drug abuse. Six months earlier, the patient had undergone to radiofrequency ablation of a 20-mm totally necrotic HCC in segment 7 (S7). 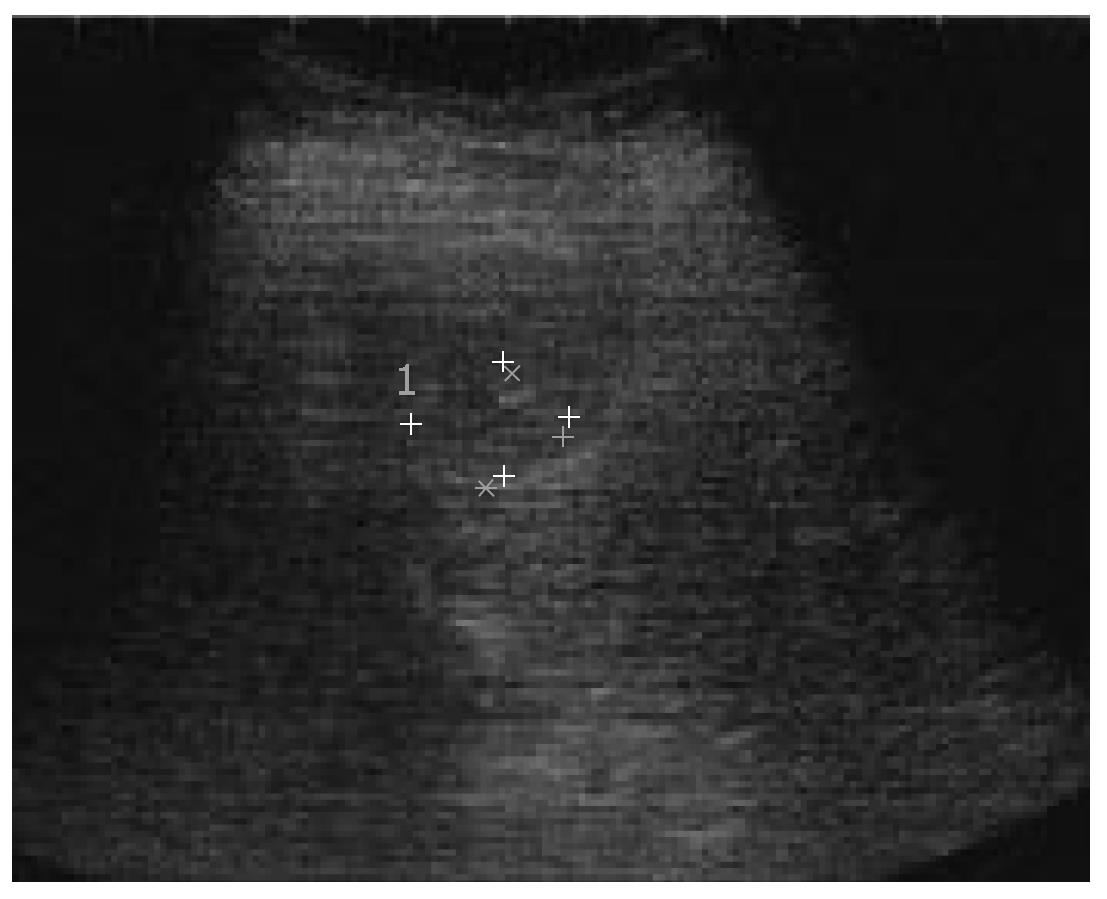 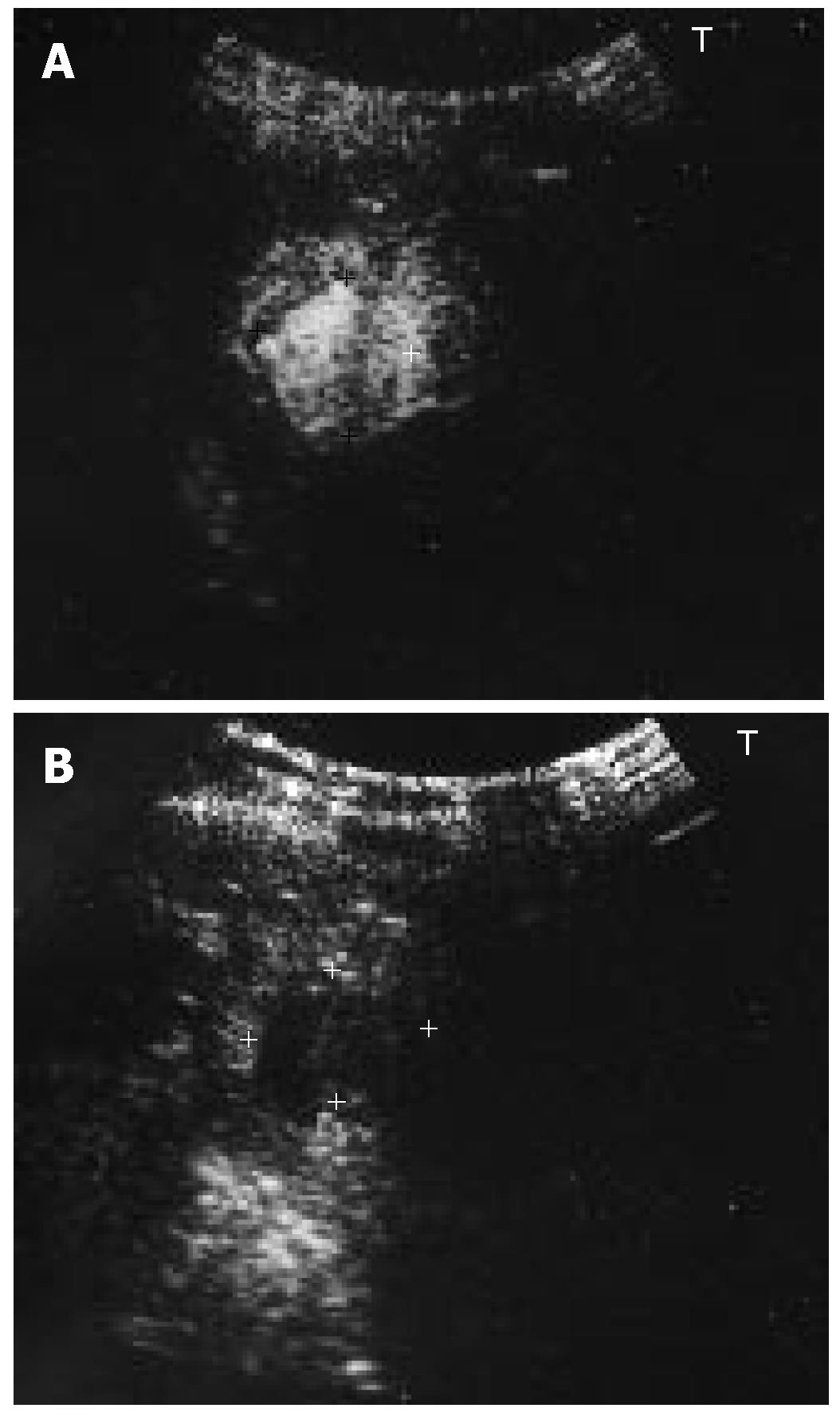 Figure 2 Contrast enhanced US of the nodule in S2. A: Hypervascularity in the early vascular phase; B: Defect in the post-vascular phase. 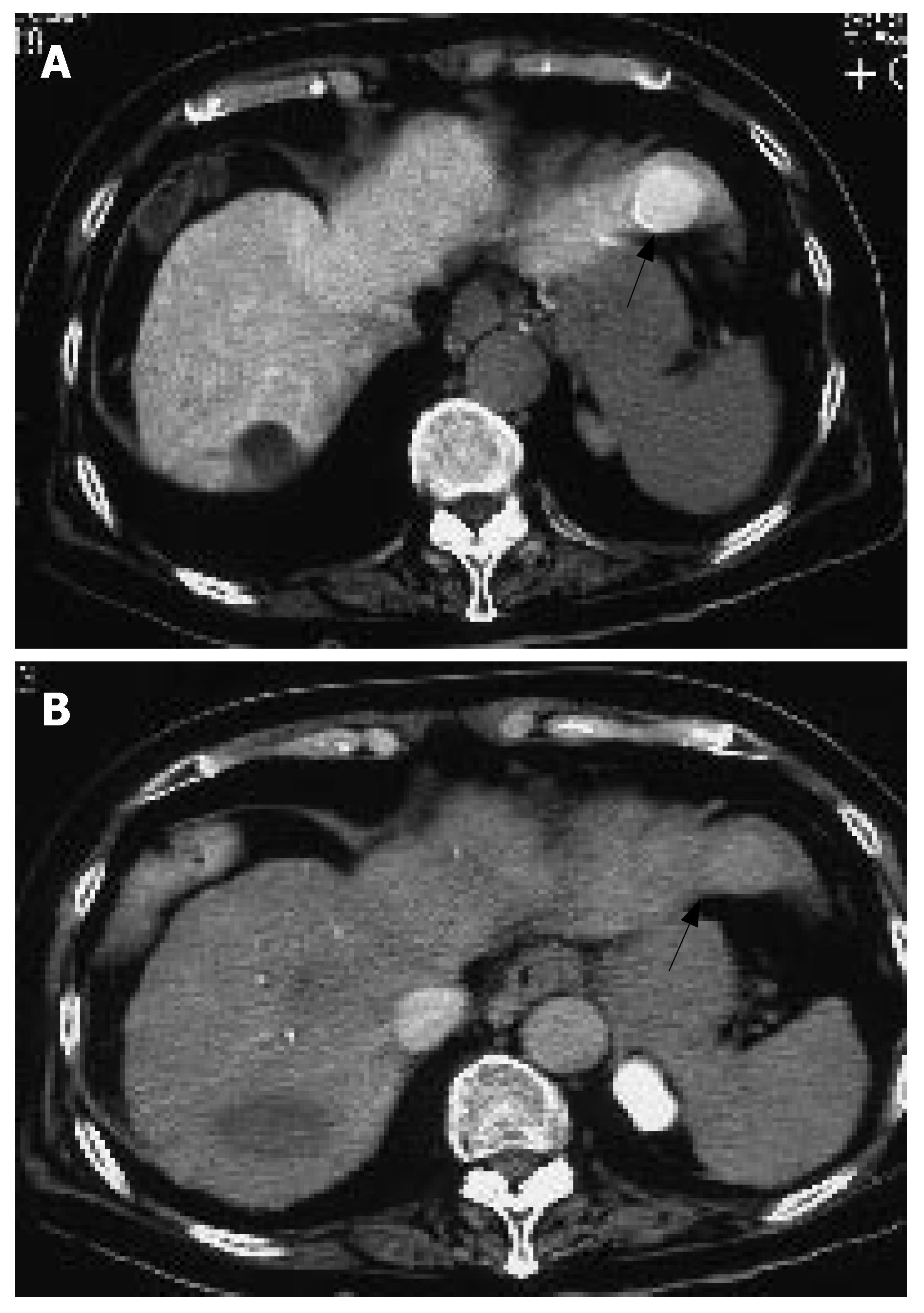 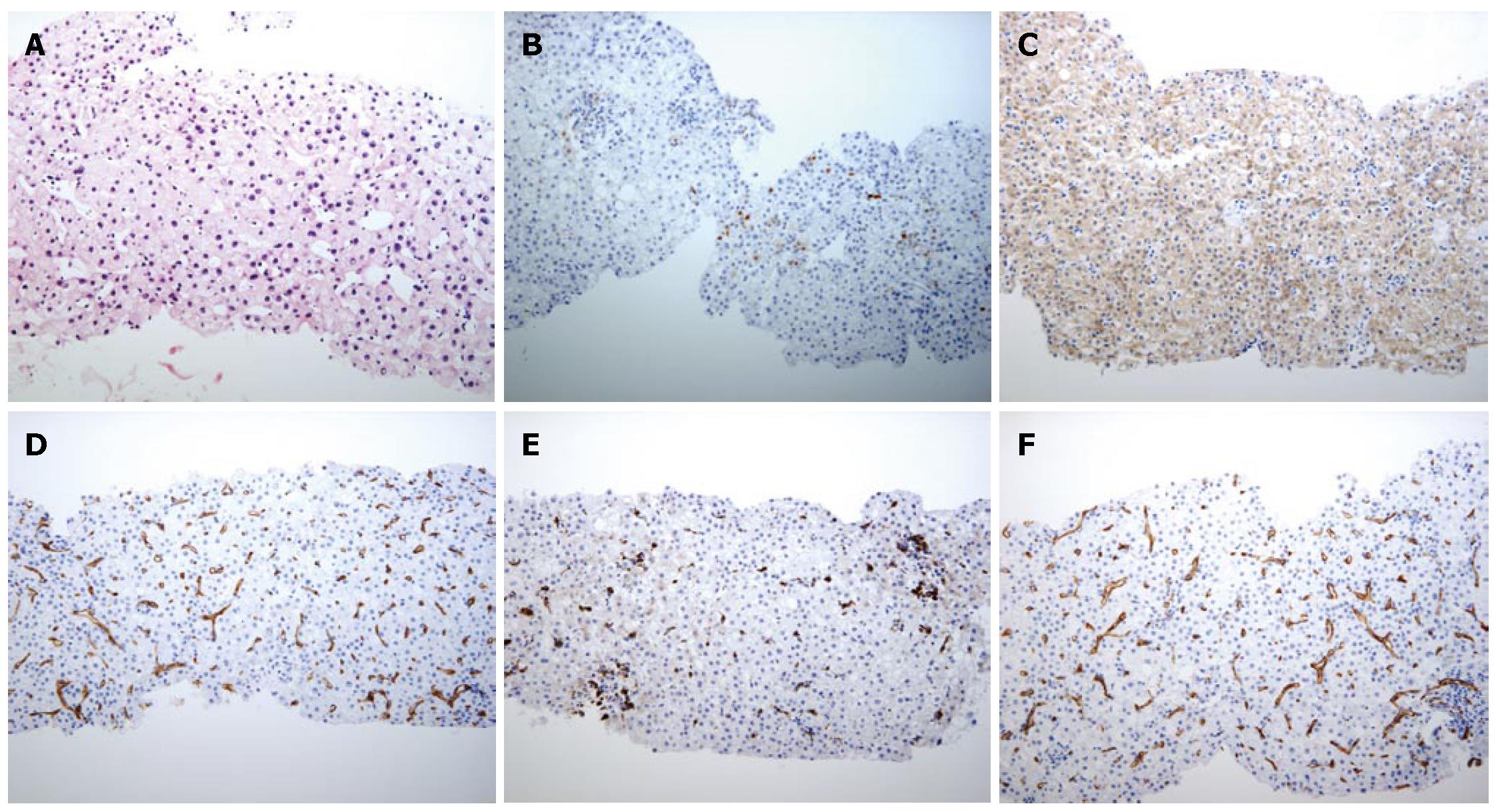 Several studies have shown sequential changes of hemodynamics in such hepatocellular neoplastic nodules and have reached similar conclusions: in the multistep developmental process of HCC, first, intratumoral hepatic arterial flow transiently decreases in the early stages of hepatocarcinogenesis and corresponds, histopathologically, to the obliteration of pre-existing hepatic arteries[2]; next intratumoral portal flow decreases gradually with the elevation of the histopathologic grades of hepatocellular nodules; and then hepatic arterial flow shows a gradual increase[4].

As is well documented through imaging techniques, such as CTA and CTAP, and histopathologically, the hepatocarcinogenetic process involves a gradual decrease in portal blood flow within the lesion and a reciprocal increase in hepatic arterial blood.

Although the HCC lesion is usually demonstrated as an iso- or hypoattenuated mass on CTAP, hyperattenuated lesions on CTAP are rare and limited to observations made in Japan[5-7].

Hyperattenuation on CTAP has been postulated as being reciprocal compensation for portal venous flow and hepatic arterial flow[5]; however, it is difficult to explain such hyperattenuation on CTAP by this premise because of the crucial gradual pressure between the hepatic artery and the portal vein. Although this hypothesis has not been pathophysiologically proven yet, one possible explanation[8] could be the following.

Abnormal thick-walled tumor vessels or tumor neovascularity may not necessarily carry arterial blood, considering the unique dual blood supply system of the originating organ, the liver. Tumor vessels may be communicating predominantly with the portal venous system through pre-existing intratumoral portal veins at the early stage of hepatocarcinogenesis (LGDN to wHCC), when both pre-existing arteries and portal veins decrease in number and when tumor angiogenesis may already have begun.

Net portal perfusion seen on CTAP in such tumors may reflect the sum or an additional effect of the reduced preexisting portal vein and the increased tumor vessels. These two factors may thus cancel out each other, resulting in isoperfusion on CTAP. When tumor angiogenesis exceeds the loss of a preexisting portal vein, the lesion may exhibit hyperattenuation on CTAP. Despite the communication between tumor vessels and portal veins, the tumor may become hypoxic because of the paucity of oxygen in portal venous blood compared with arterial blood. The hypoxia may thus induce gradual angiogenesis. As the histologic grades of the liver nodule advance, tumor vessels increase and may start to communicate with the arterial system as well, either through preexisting arteries or directly through outside arteries. Portal communication of the tumor vessels may gradually decrease; instead, arterial communication becomes gradually dominant. In mHCC and pHCC, therefore, the tumor may be fed exclusively by arterial supply.

Histopathologically, the tumor showed well- to moderately-differentiated HCC characterized by more than two-fold the cellularity of the non-tumorous area, fatty change, clear cell change and mild cell atypia with a thin to mid-trabecular pattern. Varying degrees of fatty changes may be one of the significant morphological markers of malignant transformation in the nodule, as observed in our US guided biopsy specimen.

Immunohistochemically, HSP70 is significantly overexpressed in early HCC, compared with its expression in dysplastic nodules, reaching 80% in most cases of well-differentiated HCC[9].

All cases of dysplastic nodules have been negative or focally positive (5%-10% of the lesions) for CAP2; in contrast, most cases of HCC (27 of 29 cases) have been partly positive for CAP2. Of the lesions, 70%-100% have been positive in the advanced components, and the positivity of well-differentiated HCC has ranged from 10% to 100%[10].

Positive immunohistochemical staining of both HSP70 and CAP2 confirmed the diagnosis of well- to moderately-differentiated HCC in the present case.

Positive immunohistochemical staining of CD34 in endothelial cells in the sinusoidal blood space has shown capillarization[11]. The immunohistochemical staining of CD34 was compatible with the hypervascularity of our tumor, as shown by imaging studies. Relatively less positive staining of CD68 of Kupffer cells in the sinusoidal blood space revealed the dedifferentiation. This finding was compatible with the imaging studies based on SPIO-MRI.

Further studies on sequential homodynamic change in hepatocarcinogenesis are indicated.