Since introduction by Gauderer in 1980, percutaneous endoscopic gastrostomy (PEG) has become the preferred procedure for establishing enteral feeding in most clinical situations[1]. The complication rate ranges from 3% to 14% depending on the definition used, and mortality approaches 1%[2]. Retrograde intussusception, defined as the telescoping or invagination of a distal segment of intestine (the intussusecptum) into the receiving proximal end (the intussusipiens), is a very rare complication of gastrostomy tube migration. We report here the first case treated successfully in a non-surgical manner.

An 89-year-old female nursing home resident was hospitalized with generalized abdominal pain, coffee ground emesis and change in mental status. Past history revealed hypertension, mild dementia, coronary artery disease, transvaginal hysterectomy and percutaneous endoscopic gastrostomy (PEG) placement six months prior due to poor oral intake. Four weeks prior to admission, the patient’s PEG tube was dislodged unintentionally and replaced at the bedside using a 22f Foley catheter, inflating the balloon with 10 CC of sterile water. No testing was performed to confirm intraluminal placement of the Foley at the nursing home.

Physical examination revealed a cachetic elderly woman who was somnolent but arousable. She was afebrile and normotensive. Abdominal examination revealed a distended, diffusely tender abdomen with evidence of erythema and exudate at the ostomy site and normal bowel sounds. The remainder of the physical examination was unremarkable. Pertinent laboratory studies included white blood cell count of 12.9 thousand/μL and hemoglobin of 10.7 gm/dL. Abdominal flat and upright radiographs revealed only fecal impaction. An upper endoscopy was performed within 24 h of hospitalization with detection of a large amount of brownish foul smelling fluid within the stomach. A twisted loop of small bowel with mucosal discoloration and sloughing was seen protruding through the pylorus into the gastric body (Figures 1 and 2). A 22 fr Foley catheter was seen tethering the loop of bowel to the body of the stomach. The pyloric channel was not visualized and the intubation of the duodenum was not attempted. A water contrast X-ray series performed immediately after endoscopy showed an antral filling defect with typical coil spring appearance of intussusception. A barium study through the PEG tube showed its tip in the proximal jejunum. The clinical diagnosis of retrograde intussusception was made at this time. A general surgery opinion was obtained based on the endoscopic and radiologic findings, but a conservative approach was taken at the request of the patient’s family. This included deflation and removal of the Foley catheter, placement of a button replacement PEG at the ostomy site, intravenous hydration, packed red blood cell transfusion and institution of broad-spectrum antibiotics. 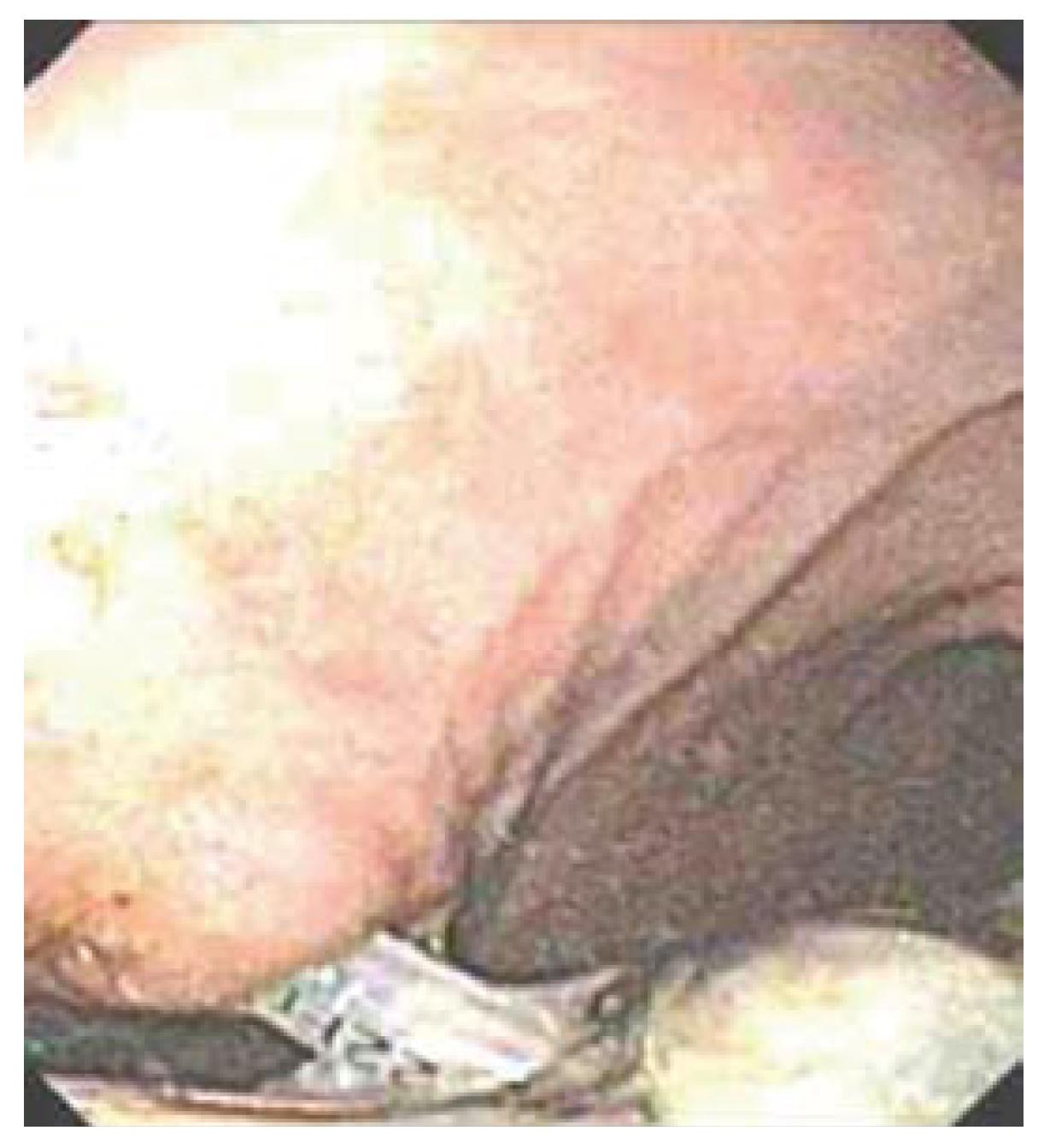 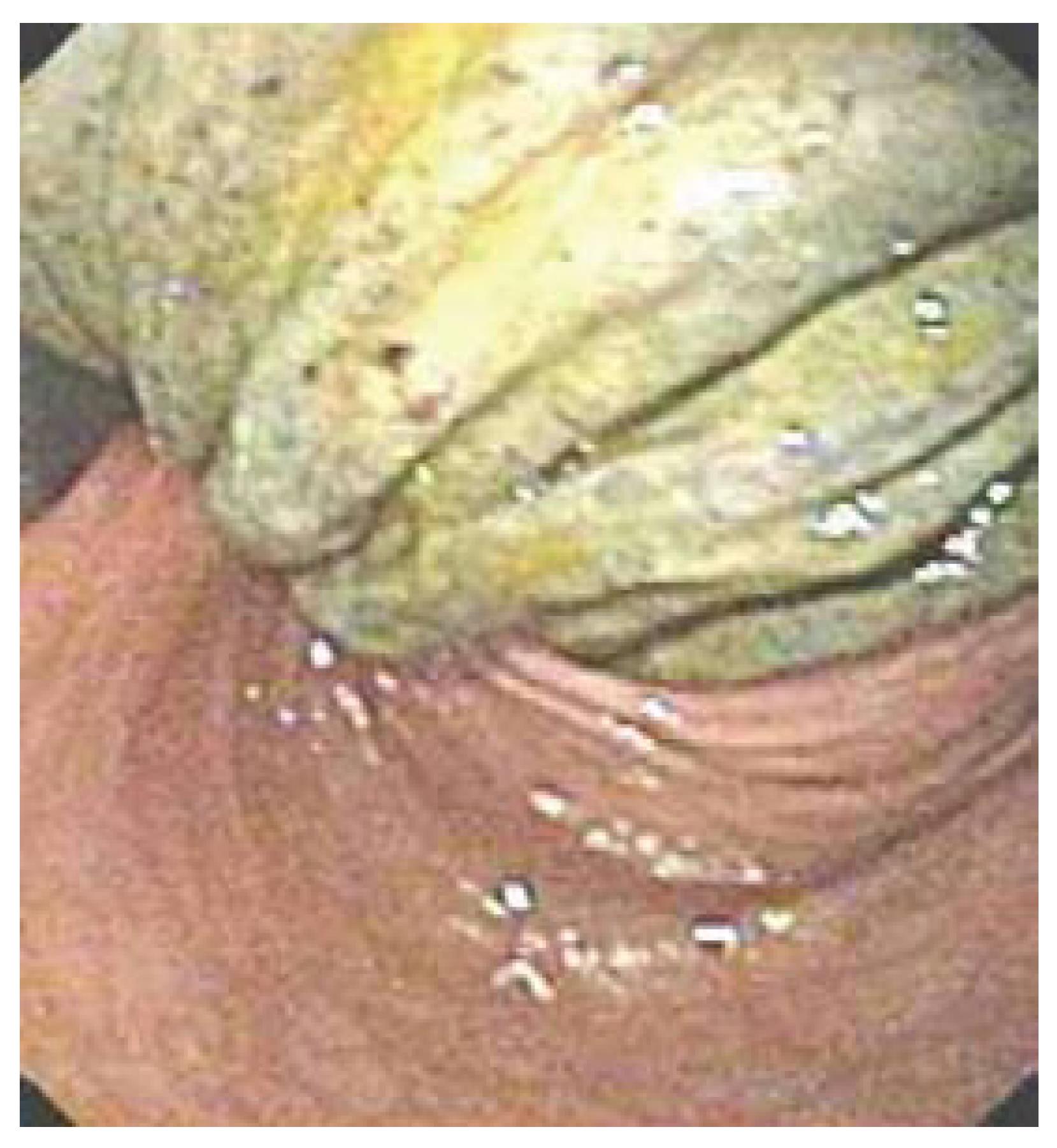 There was no overt worsening of her clinical status after deflation/removal of the Foley catheter and button PEG replacement. Repeat upper endoscopy was performed three days after PEG tube replacement. Examination distal to the second portion of the duodenum revealed a segment of continuous mucosal necrosis and discoloration. Biopsies obtained revealed mucopurulent exudates and debris with dense inflammatory infiltrates only. Feeding through the button PEG began the day after the repeat endoscopy and was tolerated well during the reminder of her hospital stay. The patient continued to improve clinically and was discharged, on hospital d 14, initially to a skilled nursing unit for a 2 wk observation period followed by eventual return to her permanent assisted living facility.

PEG tube insertion is a simple endoscopic procedure performed worldwide. Multiple complications have been reported (major and minor) including those occurred while placing the PEG and postprocedure[2]. Common complications include pain at the insertion site, peristomal leak and infection, tube extrusion, transient ileus and cutaneous ulceration[2,3]. Major complications include gastric or colonic perforation, peritonitis, gastrocolic or colocutaneous fistula, peritonitis and necrotizing fascitis[4-8]. Bleeding and aspiration are complications that have the potential of turning into serious or life threatening situations[4]. Retrograde intussusception is very rare and can occur as a complication of gastrostomy tube migration. In the English literature on this subject, only 9 cases have been reported[9-17]. Nearly all of these cases were secondary to distal migration of a Foley catheter gastrostomy tube lacking an external fixation device or support.

The diagnosis in these cases was made based on radiologic imaging (contrast or barium study, abdominal ultrasound or CT scan) with endoscopy used in 2 cases. All except 1 (postmortem diagnosis) required surgical resection. The exact mechanism leading to retrograde intussusception is unknown. Oswald et al[11] suggested that migration of the gastrostomy tube is the initiating event resulting in telescoping of the mobile jejunum over the tip of an impacted gastrostomy tube into the proximal duodenum. Lamont and Rode[12] have proposed a different mechanism with passage of an inflated Foley gastrostomy catheter migrating past the pylorus into the small bowel, resulting in balloon fixation. Retraction attempts with the balloon inflated result in invagination of the small bowel into the duodenum. Finally, Gasparri and associates[15] suggest a 3rd potential mechanism with balloon migration resulting in increased intraluminal traction and invagination of the jejunal wall. Attempts at repositioning result in the inflated balloon acting as a lead point with retrograde telescoping of the jejunum back through the duodenum and into the gastric lumen. Following these case reports, new gastrostomy tubes are now fitted with external fixation devices or bolster to prevent distal migration.

Our case illustrates a rare but preventable complication of a gastrostomy tube with uniqueness in terms of therapeutic approach. Unlike previous cases reported in the literature, our patient did not undergo surgical exploration, making a full recovery without evidence of overt sepsis or peritonitis and was eventually discharged to her nursing home. We hypothesize that following replacement of the PEG tube with a Foley catheter, the catheter migrated into and past the C-loop of the duodenum and was pulled back by NH staff without first deflating the balloon, leading to invagination of the mobile portion of the jejunum. The tube was then likely anchored in some manner leading to mucosal ischemia and necrosis but not in a transmural fashion. After deflation of the Foley catheter balloon, blood supply was restored allowing for revascularization of the mucosa.

We recommend that intussusception should be ruled out in a patient with a PEG tube who presents with symptoms of nausea, vomiting, hemetemesis or abdominal pain by direct visualization of gastric and duodenal mucosa with EGD and upper GI series with water-based contrast. If intussusception is diagnosed, surgery remains the treatment of choice. However, if identified early or patient's surrogates decline a surgical approach, rapid deflation of the Foley catheter and button PEG replacement can result in a successful conservative approach to retrograde jejunoduodenal intussusception with a positive outcome. Prevention of such a complication may be simply achieved by anchoring, with an external bolster, any type of replacement tube to prevent such a migration.

The authors would like to thank Sandra Canham, MS, AHIP for her library assistance in the preparation of this manuscript.