AIM: To report 13 patients with benign esophageal stenosis treated with the biodegradable stent.

RESULTS: Two cases were esophageal stenosis caused by drinking of caustic liquid, 4 cases were due to surgical resection of esophageal cancers, and 7 cases were patients with esophageal cancer who received the preventive placement of biodegradable stents for post-endoscopic mucosal dissection (ESD) stenosis. The preventive placement was performed within 2 to 3 d after ESD. In 10 of the 13 cases, spontaneous migration of the stents occurred between 10 to 21 d after placement. In these cases, the migrated stents were excreted with the feces, and no obstructive complications were experienced. In 3 cases, the stents remained at the proper location on d 21 after placement. No symptoms of re-stenosis were observed within the follow-up period of 7 mo to 2 years. Further treatment with balloon dilatation or replacement of the biodegradable stent was not required.

CONCLUSION: Biodegradable stents were useful for the treatment of benign esophageal stenosis, particularly for the prevention of post-ESD stenosis.

The placement of self-expanding metallic stents is routinely used to maintain esophageal patency in patients with malignancy that either have non-resectable disease or are poor candidates for surgery[1-3]. Many reports have documented the clinical effectiveness of these tools, particularly covered metallic stents[2,3]. However, the usefulness of metallic stents for benign stenosis is limited due to relatively little information regarding their long-term complications, including migration, the formation of new strictures, fistula formation and hyperplastic tissue reactions[1,4,5].

Since the cause of benign esophageal stenosis does not directly affect the patients’ prognosis, it is more important to prevent the incidence of long-term complications[4]. It is highly desirable to develop a stent that could be kept in the proper position during the repair process, and then be easily removed, thus avoiding re-stenosis. In other words, if a stent could be constructed from a biodegradable material, then a subsequent stent removal operation would not be necessary[6,7]. The degradable nature of the stent would prevent serious long-term complications.

In Japan, the majority of esophageal cancers are squamous cell carcinomas[8]. Since it has been reported that lymph node metastasis is rare in esophageal mucosal cancers, endoscopic treatment for esophageal mucosal cancers such as endoscopic submucosal dissection (ESD) is recommended in Japan[8]. ESD is a recently-developed technique, and makes it possible to perform an en bloc resection of a mucosal lesion. The quality of life after an endoscopic resection is also much better than that after an esophagectomy. However, a mucosal resection over 75% of the circumference sometimes causes stenotic changes, and requires balloon dilatation[8].

Recently, we developed an Ultraflex-type biodegradable stent by knitting poly-l-lactic acid (PLLA) monofilaments together for the treatment of patients with benign gastrointestinal tract stenosis[9]. PLLA has been used for orthopedic applications in humans, and has generally been found to be bio-absorbed over a few months[7,10-13]. The radial force of this biodegradable stent was comparable to that of commercially available metallic stents[9]. Here, we report 13 cases with benign esophageal stenosis that were treated with biodegradable stents. These cases include benign esophageal stenosis due to drinking of caustic liquid in an attempt to commit suicide and anastomosis after surgical resection for esophageal cancer. Seven cases of preventive placement of biodegradable stents for post-ESD stenosis were also included.

MATERIALS AND METHODS
Description of the stent and endoscopic implantation

The PLLA esophageal stent (Tanaka-Marui stent; Marui Textile Machinery Co., Ltd., Osaka, Japan) is composed of a PLLA monofilament (molecular mass 183 kD, diameter 0.23 mm) with a machine knitted design like an ultra flex metallic stent (Figure 1A). The length and diameter of the PLLA stent was designed according to the esophageal lesion of each individual patient. One end of the PLLA stent was tied into a 5 mm diameter by silk sutures, and the PLLA stent was fitted over an endoscope (Figure 1B). The radial force of the biodegradable stent was 117 gf[9], and this is comparable to commercially available metallic stents[9]. 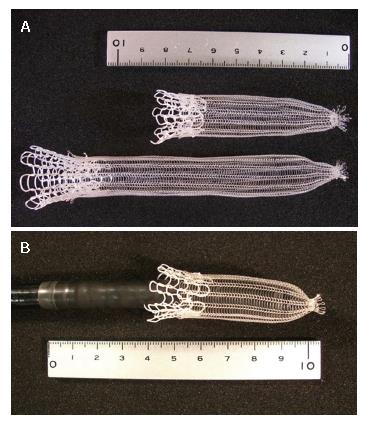 Figure 1 The PLLA esophageal stent (Tanaka-Marui stent; Marui Textile Machinery Co. , Ltd., Osaka, Japan). A: One end of the PLLA stent was tied into a 5 mm diameter by silk sutures; B: The stent was fitted over an endoscope.

The ethics committee of the Shiga University of Medical Science approved this project, and written informed consent was obtained from each patient.

A 64-year-old man was admitted to the Shiga University Hospital (Otsu, Japan) due to an early squamous esophageal cancer in the middle esophagus. The lesion was 40 mm in diameter on the posterior wall (Figure 2A). The lesion occupied 75% of the circumference, and endoscopic ultrasound sonography indicated that the depth of invasion did not reach the muscularis mucosa. According to the patient’s request, ESD was performed[8]. The lesion was resected en bloc, and the mucosal defect was seven eighths of the circumference (Figure 2B). As shown in Figure 2C, to prevent an occurrence of stenosis, the PLLA esophageal stent was placed on the next day. The PLLA esophageal stent was fitted over a fiberscope and inserted through the resected portion. When the tip of the endoscope reached 20 mm from the caudal side of the resected portion, the PLLA stent was released by pulling it out from the fiberscope (Figure 2C). The rostral end of the PLLA stent was fixed to the esophageal wall by 5 endoscopic clips (HX-110LR; Olympus medical System Corp. Tokyo, Japan) (Figure 2D), and then the silk suture at the distal margin was cut by scissor forceps (FS-3L-1; Olympus). A follow-up study 6 month later showed sufficient patency in the resected portion (Figure 2E). 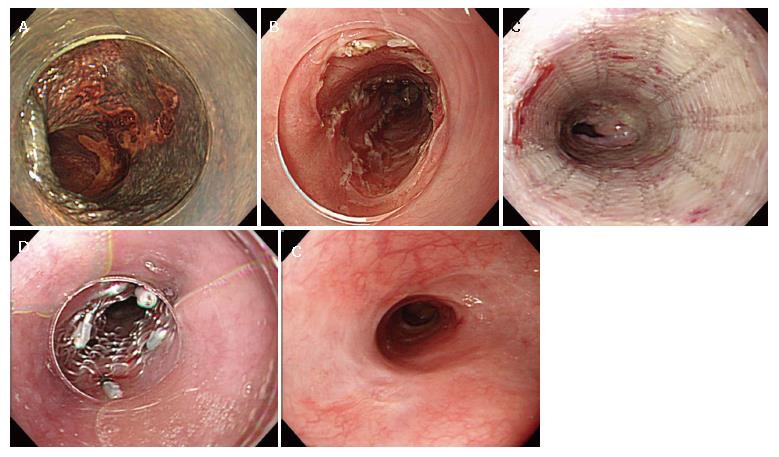 As shown in Table 1, 13 patients with benign esophageal stenosis were treated with biodegradable stent. Case 1 and 2 were esophageal stenosis caused by the drinking of caustic liquid. Case 3 to 6 were esophageal stenosis caused by surgical resection for esophageal cancer. These 6 cases (case 1 to 6) received a repeated balloon dilatation before treatment with the biodegradable stent. Cases 7 to 13 were preventive placement of the biodegradable stent for post ESD stenosis. In these patients mucosal defect by ESD was over 75% of the circumference, and stenotic changes were highly supposed. The preventive placement of biodegradable stent was performed with 2 to 3 d after ESD. In 10 of the 13 cases, spontaneous migration of stents occurred between 10 to 21 d after placement. In these cases, the migrated stents were excreted with feces, and no obstructive complication was experienced. In 3 cases, the stents remained at their proper position until 21 d after placement. The follow-up period of these patients was between 7 mo to 2 years, and no patient complained of symptoms of re-stenosis. In cases 1 to 6, further treatment with balloon dilatation was not required.

Metallic stents are effective for treating malignant stenoses of various tract organs. Metallic stents are less invasive, but various complications such as perforation, bleeding, migration, tumor in-growth and foreign body reactions have been reported[1,2]. In cases with serious complications, surgical removal of the metallic stent is required[14]. Based on this notion, considerable effort should be devoted to avoiding serious complications in patients with benign esophageal stenosis, because their prognoses are good with an expected long-term survival. If the stents gradually degrade while maintaining their dilatation force, they would be ideal treatments for patients with benign esophageal stenosis.

Benign gastrointestinal strictures are usually managed by maintaining an unobstructed passage with periodic balloon dilatation. If the strictures do not respond to these therapies, surgical resection is considered. With advances in endoscopic intervention, a variety of new techniques have been developed. For examples the injection of corticosteroids into the stenotic portion under endoscopic guidance has been used to prevent stenosis by blocking the progression of fibrosis[20,21]. An endoscopic incision of the stenotic wall has also been attempted[21]. However, metallic stents are not suitable for benign stenotic lesions in the gastrointestinal tract because they cannot be easily removed, and therefore may cause serious unavoidable complications during long-term use.

In this study, we presented 13 cases treated with the biodegradable stent. Six cases (cases 1 to 6) received a repeated balloon dilatation before placement of the biodegradable stent, but no further treatment was required after biodegradable stent implantation. In 10 of the 13 cases, spontaneous migration of the stents occurred between 10 to 21 d after placement. This may be due to a loss of patency as the stents degrade. In these cases, the migrated stent was excreted with the feces, and no obstructive complication was experienced. However, as one possible complication careful attention should be paid to potential bowel obstruction caused by the migrated stent. The follow-up period of these patients was between 6 mo to 2 years, and no patients complained of symptoms of re-stenosis. These findings support the effectiveness of this novel developed biodegradable stent for benign esophageal stenosis.

There are an increasing number of patients with early esophageal cancers who receive complete resection by endoscopic procedures such as ESD[8]. This treatment is less invasive than traditional surgical approaches, but when the mucosal defect covers over 75% of the circumference, then stenosis frequently occurs[8]. A mucosal defect that covers the entire circumference always causes stenosis. Thus, the number of patients with esophageal stenosis after ESD is increasing, and these patients are sometimes resistant to repeated balloon dilatation. In these patients, the application of biodegradable esophageal stents as a tool for preventing of stenosis seems to be reasonable. We usually place the stents in patients with the mucosal defect of over 75% of the circumference. Our data showed that placement of the biodegradable stents with 2 to 3 d after ESD effectively prevented ESD-related stenosis. This suggests that early phase of repair process plays an important role in the progression of stenosis. A detailed clinical follow-up of the biodegradable stent should be performed over a longer period.