AIM: To study the apoptosis induced by preoperative oral 5’-DFUR administration in gastric adenocarcinoma and its mechanism of action.

METHODS: Sixty gastric cancer patients were divided randomly into three groups (20 each group) before operation: group one: 5’-DFUR oral administration at the dose of 800-1200mg/d for 3 - 5 d, group two: 500mg 5-FU + 200 mg/d CF by venous drip for 3 - 5 d, group three (control group). One or two days after chemotherapy, the patients were operated. Fas/FasL, PD-ECGF and PCNA were examined by immunohistochemistry and apoptotic tumor cells were detected by in situ TUNEL method. Fifty-four patients received gastrectomy, including 12 palliative resections and 42 radical resections. Six patients were excluded. Finally 18 cases in 5’-DFUR group, 16 cases in CF + 5-FU group, and 20 cases in control group were analyzed.

CONCLUSION: Preoperative oral 5’-DFUR administration may induce apoptosis of gastric carcinoma cells and decrease tumor cell proliferation index, but cannot improve the prognosis of patients with gastric cancer. Down-regulation of FasL and PD-ECGF expression mediated by 5’-DFUR may be one of its anti-cancer mechanisms. Fas expression correlates with the progression of gastric carcinoma and may be an effective prognostic factor.

Cell apoptosis and proliferation regulate homeostasis. Disordered balance results in tumorigenesis. Cell apoptosis can hinder tumor growth[1-3]. Therefore,induction of tumor apoptosis is a good anti-cancer therapy. At present, the relationship between chemotherapy and cancer cell apoptosis has drawn more and more attention. However, studies on induction of apoptosis in gastric carcinoma are performed in vitro. Inducers reported include γ-ray, beta-ionone, biological response modifiers, chemotherapeutics, etc[4-8]. Chemotherapeutics-induced apoptosis is one of its anti-cancer mechanisms. Arsenic trioxide[9], hydroxycamptothecin[10], cisplatin[11] , paclitaxel[12], fluorouracil and its derivant [13,14] , oxaliplatin[15] can induce apoptosis in human gastric carcinoma cells. 5’-deoxy-5-flurouridine (doxifluridine or 5’-DFUR (known as Furtulon) is a selective anti-cancer medicine, which can be converted into 5-FU by thymidine phosphorylase (the same substance as traversing platelet-derived endothelial cell growth factor, PD-ECGF)[14,19,20]. Accordingly, the concentration of 5-FU is high in tumor tissue[19,21]. The therapeutic index of doxifluridine is ten times that of 5-FU[19]. Doxifluridine has been widely used in treatment of breast cancer, colorectal carcinoma, ovarian adenocarcinoma, bladder cancer and gastric carcinoma[22-26].

In this study, we used doxifluridine as an apoptosis inducer to study the change of apoptosis and expression of proliferative cell nuclear antigen (PCNA), Fas and Fas ligand (FasL), and PD-ECGF in gastric adenocarcinoma and its mechanism of action.

Of the 60 patients, 54 underwent gastrectomy (including 12 palliative resections and 42 radical resections, and 6 were excluded. No perioperative mortality occurred during the first 30 days after surgery. Complications were recorded in four of 54 patients resected, one gastric perforation on the fourth day after 5’-DFUR oral chemotherapy, one preoperative gastrorrhagia and one postoperative cerebral infarction in CF+5-FU group, one venous thrombosis of lower extremities in control group complicated by cerebral hemorrhage during thrombolysis treatment. The patients with gastric perforation and gastrorrhagia required emergency laparotomy. 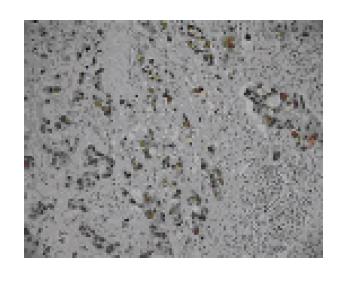 All data were analyzed by ANOVA and chi square test. P < 0.05 was considered statistically significant.

The expression of PI, AI, FasL and PD-ECGF was not statistically significant as compared to the operation procedure (radical or palliation resection), early or advanced tumor, T, N, M and UICC stages. In contrast, positive staining of Fas was closely related to radical resection but not with serosal invasion, lymphnode metastasis and early UICC stages (Table 1, Figure 1).

Influence of preoperative chemotherapy on expression of AI, PI, Fas/FasL and PD-ECGF

Figure 2 Fas expression (A) and survival rate (B) in three groups.
DISCUSSION

Gastric carcinoma is one of the most common malignant tumors and remains a leading cause of cancer-related death worldwide [15,16,28-30]. In China, it still ranks the first[31,32]. Operative resection is the most effective treatment nowadays. However, the 5-year survival rate was 25%~60% even after radical resection[33-36], micrometastasis is the major reason for recurrence[29,37,38]. Preoperation chemotherapy can inhibit micrometastasis, but strong chemotherapy may potentially increase operation complications in resectable patients[30,35,36]. It was reported that surgical resection may serve as a stimulus for the growth of residual tumor[30]. Inada et al13］ have reported the effectiveness of preoperative 5-Fu venous chemotherapy, which can induce cancer cell apoptosis in vivo. Our study showed that preoperative venous CF+5-Fu chemotherapy and 5’-DFUR oral administration could induce gastric carcinoma cell apoptosis and inhibit cancer cell proliferation. Wang et al[22] reported that preoperative 5’-DFUR chemotherapy is able to partially inhibit the expression of extracellular signal-regulated kinase（ERK）which is closely related with cell proliferation in breast cancer. PCNA index decrease in our studies might be related with inhibition of ERK-1 and ERK-2 expression. Liang et al[39] studied apoptosis in ovarian cancer and found that apoptosis induced by chemotherapy is decreased, suggesting that apoptosis induced by chemotherapy has a time limit. Therefore, preoperative chemotherapy-induced tumor cell apoptosis can inhibit malignant behavior in some degree.

Fas(CD95/APO-1)/Fas ligand (FasL) system is one of the major apoptotic pathways and plays an important role in maintenance of cell colony, elimination of malignant transformation cells and regulation of immune system[1-3,40]. In general, Fas/FasL system plays an important role in prognosis and immune escape. Fas of activated T lymphocytes and tumor-infiltrating lymphocytes(TIL) can increase apoptosis[1-3,40-45]. Tumor cells combined with activated T lymphocytes and TIL can kill surrounding normal infiltrating lymphocytes, escape immune system[1,2,22,23,43,44]. Our investigation showed that preoperative 5’-DFUR oral administration chemotherapy could down regulate FasL expression, which may be one of its mechanisms underlying tumor cell apoptosis. But CF+5-FU venous chemotherapy had no influence on Fas/FasL expression, suggesting that 5’-DFUR and 5-FU have a different mechanism of action. Induction of 5-FU is relevant with activation of apoptosis gene bax[45], and expression of bcl-2 oncogene[13].

PD-ECGF, one of the angiogenesis factors, extracted from fresh thrombocytolysis matters is the same substance as thymidine phosphorylase(TP), PyNPase[20,46-49]. It can promote angiogenesis, cell proliferation and inhibit apoptosis[46-49]. Konno et al[47] reported that expression of PD-ECGF in gastric carcinoma has a positive correlation with PCNA, and PD-ECGF can also promote tumor growth. Osaki et al[20] found that increased PD-ECGF expression is closely related with decreased apoptosis in gastric carcimoma. The mean apoptotic index in early and advanced gastric cancer is significantly lower in positive PD-ECGF than in negative PD-ECGF. Koizumi et al[21] determined PD-ECGF expression in gastric carcinoma and found that the responsive rate to chemotherapy is 56.8% in positive PD-ECGF group and 0% in negative group, and 82.4% in PD-ECGF over expression group, indicating that chemosensitivity is closely related with PD-ECGF expression. PD-ECGF can increase the activity of 5-FU and other anti-cancer medicines[50]. Cytokine such as interferon, can up-regulate PD-ECGF and cytokine levels, thus detecting PD-ECGF level in tumor tissue can predict chemotherapy sensitivity and its efficacy[18,26,51]. PD-ECGF inhibitors can decrease tumor angiogenesis, prevent infiltration and metastasis[52]. PD-ECGF is the key enzyme for the metabolism of Fortulon. Satoh B et al[14] reported that by oral administration of 5’-DFUR, 1 200 mg per day for seven days significantly decreases PD-ECGF activity and acidic protein. Our results showed that preoperative oral administration of Fortulon for 3 - 5 d can down-regulate PD-ECGF expression and induce cancer cell apoptosis in gastric carcinoma. Over expression of PD-ECGF is an important factor of tumor metastasis [53]. Our results also showed that patients with PD-ECGF overexpression had a higher tendency toward liver metastasis. For this reason, down regulation of PD-ECGF expression by preoperative 5’-DFUR chemotherapy plays a certain role in preventing postoperative recurrence and metastasis of gastric carcinoma. It was reported that PD-ECGF level is closely related with tumor metastasis[24,25].

Kabayashi and kimur[8] performed a multicenter clinical trial of preoperative chemotherapy for gastric cancer and found that oral administration of 5’-DFUR may induce apoptosis of gastric carcinoma and decrease proliferation index in old patients with advanced gastric cancer, but cannot improve their prognosis. However, Fas expression is often presented in early stage of tumors and shows a better prognosis. Thus, Fas expression in gastric carcinoma may be an effective prognostic factor for survival.

In conclusion, 5’-DFUR or CF+5-FU chemotherapy can induce apoptosis and inhibit proliferation of tumor cells. Down regulation of FasL and PD-ECGF induced by 5’-DFUR may be one of its anti-cancer mechanisms. Fas expression is correlated with progression of gastric carcinoma and may be an effective prognostic factor.