METHODS: We performed a large scale retrospective study to analyze the correlation between the incidence of colorectal adenoma or carcinoma and the fasting serum levels of total cholesterol (TC) and triglycerides (TG) in patients who underwent total colonoscopy for screening for colon cancer.

CONCLUSION: Although a high level of serum triglyceride does not appear to be mechanically involved in the development of carcinoma, reduction of serum TG and intensive surveillance with total colonoscopy may have benefit in men with hypertriglyceridemia.

Many studies have suggested that a high intake of dietary fat tends to promote colon carcinogenesis[1-4]. Regarding serum lipid levels, early studies showed an inverse association between cholesterol levels and colon cancer, whereas many contradictory results have also been reported later[5-8]. These findings suggest that the association of low serum cholesterol with malignancies is a consequence of the impaired nutritional status rather than a cause of cancer.

As compared with total cholesterol, less information is available on the relationship between serum triglyceride and colorectal neoplasm. The striking similarity of lifestyle risk factors for colorectal cancer and insulin resistance suggests that hypertriglyceridemia as well as hyperinsulinemia and hyperglycemia associated with insulin resistance support the development of colon cancer[9-12]. Moreover, recent animal studies showed direct evidence suggesting a positive effect of triglyceride on the development of aberrant crypt foci[13] and adenomatous polyps[14,15]. This suggests overlapping mechanisms that increase the risk of colon cancer and hyperlipidemia. On the contrary, other reports failed to detect a significant association between serum levels of triglyceride as well as cholesterol and risk of colorectal cancer in human[16,17] and animal studies[18].

Thus, the true association between circulating lipid levels and colonic neoplasm development has not been satisfactorily determined in humans. In our clinic, we have performed a large number of total colonoscopies for screening for colon cancer, and intensively attempted to find colonic adenomatous polyps, since it is generally accepted that most colorectal cancers arise from adenomatous polyps[19]. From our experience, we retrospectively analyzed the relationship between serum lipid levels and the presence of colonic adenoma as well as carcinoma.

A total of 4887 patients underwent total colonoscopy to screen for colon cancer from 1995 to 2003 in our clinic. The entire colon was carefully examined with a high resolution magnifying chromo-endoscope. More than 30 min was spent performing each colonoscopy, in order to avoid overlooking small lesions. All the adenomatous polyps including mucosal cancers were simultaneously resected by endoscopic polypectomy technique and examined histopathologically. Invasive cancer was found in 110 (2.3%) of 4887 patients even without subjective complaints. All the patients also had 1 to 77 adenomatous polyps in other parts of the colon. In the remaining 4777 patients, no adenomas were found in 956 (19.6%) patients, whereas at least one adenoma could be detected in the other 3821 (78.2%) patients, and all of them were endoscopically removed simultaneously. In 386 cases, 1 to 3 adenomas were histologically diagnosed to contain mucosal carcinoma. In these 3931 patients with adenomas (including patients with invasive cancer), only one adenoma was detected in 660 (13.5%) patients, 2 in 549 (11.2%) and 3 in 458 (9.4%) patients. In the other patients, 1934 (39.6%) had 4 to 9 adenomas, while the other 788 (16.1%) patients had 10 or more adenomas in the entire colon. Histological examination revealed mucosal cancer in 386 (9.9%) patients and that most of the resected adenomas were diagnosed as tubular adenoma, and that tubular adenoma was detected in 3928 (80%) of the total patients. Villous adenoma and serrated adenoma were observed in 53 (1.4%) and 36 (0.9%) cases, patients.

Determination of serum cholesterol and triglycerides

Statistical analysis was performed with JUMP software. The serum lipid levels in patients were analyzed by ANOVA and Fisher’s exact test. The odds ratios were evaluated by multiple logistic regression tests. Values of P less than 0.05 were considered statistically significant.

RESULTS
Serum levels of TC and TG in patients with tubular, villous and serrated adenomas 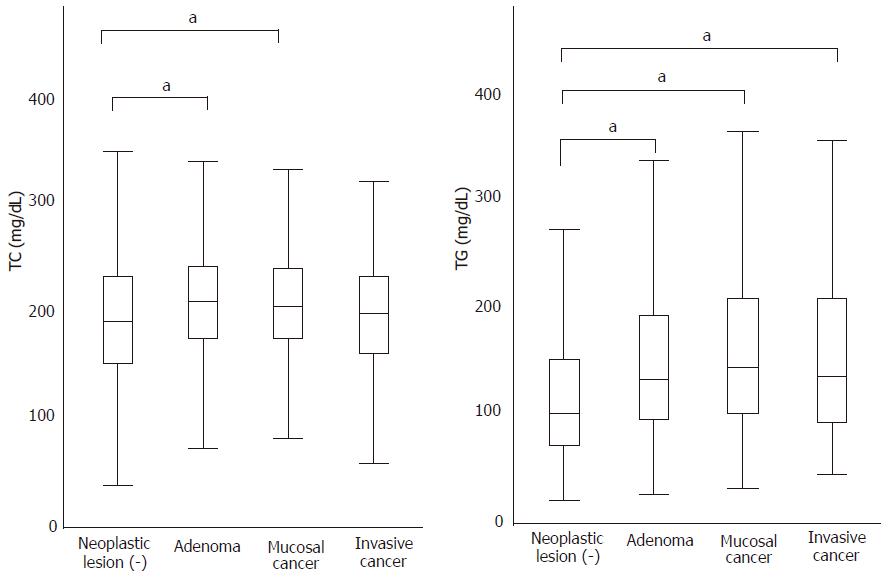 We then performed multivariate analysis to determine the real association between serum lipid levels and tubular adenomas. Since univariate analysis showed that male and aged patients had colonic adenomas more frequently than their counterparts, we separately calculated the odds ratios for a change of one standard deviation (SD) adjusted for age in male and female patients (Tables 2 and 3). Multiple logistic regression analysis showed a clear contrast between TC and TG. When age and sex were considered, TC lost the independent relationship with adenoma, possibly because of the strong association with age. In contrast, TG was determined to be an independent correlation factor with tubular adenoma in total (P < 0.05) and male (P < 0.01) patients, but not in female patients.

Epidemiologic studies have suggested that a high fat intake is strongly related to the development of colorectal cancer, although it is unclear whether serum lipid levels can predict the high risk population for colon cancer. Our results clearly indicate that hyperlipidemia is associated with the development of adenomatous polyps with tubular histology in the colon. Although a positive association between hyperlipidemia and colonic neoplasm has already been reported, this large scale study revealed two additional findings.

The first is that the serum levels of cholesterol and triglycerides are increased in patients with adenoma compared to those without adenoma, while serum levels in patients with cancer are not elevated compared to those with adenoma. This indicates that a high fat intake that increases serum lipid levels may play a role in the development of adenoma but not in the development of carcinoma from adenoma.

The other important finding is that TG, but not TC, was independently correlated with the development of tubular adenoma, and the association was observed only in male but not in female patients. Recent studies have demonstrated that APC-deficient FAP model mice showed a hyperlipidemic state, possibly due to reduced activity of lipoprotein lipase, and that systemic administration of pioglitazone, a PPAR ligand, to the mice markedly reduced the serum level of triglycerides as well as intestinal polyp formation[14,15]. These results are in agreement with our findings, and suggest the possibility that pioglitazone may be clinically effective to prevent polyp formation in humans.

The reason that the association was evident in male, but not in female patients, is yet unknown. The triglyceride level was significantly lower in women than in men in our series (106.17 ± 63.00 vs 145.90 ± 86.39, P < 0.001), and tubular adenoma was observed in 70.5% of female patients versus 86.6% of male patients (P < 0.001). Since it was reported that the usage of estrogen reduced the incidence of colon adenoma as well as carcinoma by about 30%, resulting in reduced colon cancer-related mortality [20], hormonal effects may be mechanically involved in the suppression of adenoma formation in the colon.

In summary, hypertriglyceridemia was shown to be an independent risk factor for colonic adenoma in men, although a high level of serum triglyceride did not appear to be directly involved in the development of colon carcinoma. Since all the adenomas were exclusively polypectomied in this clinic, no invasive cancers were detected at annual follow-up of those patients. Reduction of serum TG and intensive surveillance with total colonoscopy may be effective to prevent colon cancer in men with hypertriglyceridemia.