AIM: To evaluate the mechanical and biochemical parameters of colonic anastomotic healing in hypercholesterolemic rats.

METHODS: Sixty rats were divided into two groups of 30 each according to their dietary regimens. The test group was fed with a high cholesterol-containing diet for two months while the control group had standard diet. These two groups were further divided into three subgroups consisting of ten rats each. After hypercholesterolemia was established, left colon resection and anastomosis were performed in both groups and samples from liver and abdominal aorta were taken to evaluate the systemic effects of hypercholesterolemia. Anastomotic wound healing, blow-out pressures and tissue hydroxyproline levels were evaluated.

RESULTS: The test group had a significant weight gain in two months. Microscopic examination of the abdominal aorta revealed no atherosclerotic change in none of the groups, but liver tissue specimens showed significant steatosis in the test group. Tissue hydroxyproline levels and anastomotic blow-out pressures were significantly lower in the test group than in the controls.

Leakage in colonic anastomosis has a higher incidence of morbidity and mortality rate compared with that in small intestinal anastomosis. The overall leakage incidence of intestinal anastomosis is 2-35%[2]. Most of them are minimal and can be limited by the host defense mechanisms. Systemic and local factors play a role in anastomotic wound healing. Anemia, hypovolemia, low arterial PO2, neutropenia, low O2 saturation, malnutrition, vitamin deficiencies, zinc deficiency, jaundice, uremia and high dose corticosteroids are some of the systemic factors, while local factors include infection, intestinal contents, prophylactic antibiotics, technique of suturing and suture material, radiation and mesenteric vascular occlusion[2-4].

In experimental studies, microscopic healing in small intestine is better than that in the colon[5,6]. Intestinal anastomotic wound healing can be evaluated mechanically, biochemically and histopathologically. Mechanical evaluation depends on the blow-out pressure of the anastomotic line. This pressure can change with the inflation rate of the intestine or the in situ procedure[2,7-9]. Continuous suturing technique has no effect on this pressure[10].

Biochemically, collagen production rate and amount in the anastomosis line are the factors to be measured. Since the majority of the collagens are hydroxyproline, all measurements are made by detecting the hydroxyproline content[7,11,12]. Histopathologically, the only evidence is the infiltration of several kinds of inflammatory cells[2,7].

In this study, the mechanical and biochemical parameters of colonic anastomotic wound healing were evaluated in rats fed with a high cholesterol containing diet (2% cholesterol + 1% colic acid: Sigma Co., Manchester, UK) for two months[13]. Abdominal aortic and liver tissue samples were also obtained to evaluate the systemic effects of hypercholesterolemia.

Sixty rats of both sexes weighing 240-300 g used in this study were divided into two groups according to their dietary regimens. The test group consisted of 30 rats fed with a high cholesterol diet for two months while the control group had standard diet for the same period. The test group had a significant weight gain at the end of this period (Table 1).

These two groups were further divided into three subgroups, ten rats each group. Ten milliliter blood was taken from each rat for measurement of serum total cholesterol and triglyceride levels. In the test group, serum total cholesterol and triglyceride levels were significantly higher than in the control group (Figure 1). After hypercholesterolemia was established, left colon resection and anastomosis were performed in both groups and tissue samples were taken from liver and abdominal aorta.

After an overnight fasting, intramuscular ketamin HCl (Ketalar, Parke Davies) was administered (50 mg/kg). One percent povidon-iodine was used for local cleansing. A midline laparotomy was performed and a segment of left colon (1 cm) was resected. Colo-colonic anastomosis was made using 7/0 polyproene (Prolene, Ethicon Inc., UK) with 8-10 stitches for a layer. There was no postoperative mortality.

In both groups, 10 rats underwent relaparotomy on the third day and 10 rats on the seventh day. Colon lumen was obliterated 10 cm distal to the anastomosis using 3/0 silk ligature. Colon was transected 10 cm proximal to the anastomotic line and an infusion set was inserted into the lumen. This set was connected to an infusion pump (Life Care 5000 Infusion System, Abbot, Illinois, USA) and isotonic sodium chloride was given at a rate of 2 mL/min into the lumen (Figure 2). The pressure at the moment of the first leakage observed from the suture line was recorded as the blow-out pressure. All measurements were done in situ. After the measurements, tissue samples were taken from the liver and abdominal aorta for histopathological examination. The experiment was terminated by creating a pneumothorax. 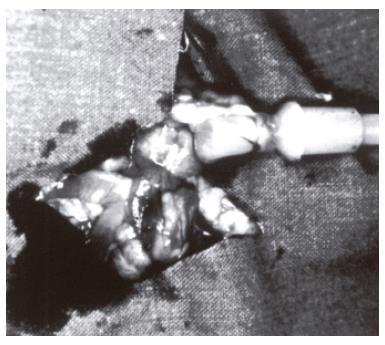 Figure 2 Insertion of an infusion pump into the colon.

In all groups, one centimeter segment of colon (including 0.5 cm proximal and 0.5 cm distal to the anastomotic line) was resected (Figure 3). The suture material was removed and the samples were kept in liquid nitrogen until the assay day. 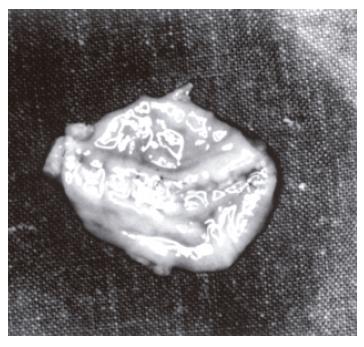 Mann Whitney U test was used for statistical analysis compare the blow-out pressures and hydroxyproline contents between groups. P < 0.05 was considered statistically significant.

The rats in the test group gained significant weight (Table 1). The weight difference between the pre and post-feeding periods was statistically significant (P < 0.05).

Figure 4 Mean blow-out pressure (A) and hydroxyproline level (B) in test and control groups.

Figure 5 Macroscopic (A) and microscopic (B) steatosis in liver.
DISCUSSION

In this study, left colon anastomosis was performed in hypercholesterolemic rats and the mechanical and biochemical parameters of anastomotic wound healing were investigated. Anastomotic wound healing in the test group was worse than that in the control group in terms of hydroxypline levels and blow-out pressures. Significant steatosis was found in the liver specimens but no atherosclerotic changes in the aortic specimens. This finding is in accordance with several studies[15-17].

The cause of hypercholesterolemia-induced endothelial damage is predominantly determined by loss of endothelium-mediated relaxation. The mechanisms are as follows: decrease in the relaxing effect of NO/EDRF, ADP, thrombin, Ca++-ionophore A 23187 on endothelium[2,16,21,25,26]; increase in platelet aggregation and turnover as well as the sensitivity of platelets to aggregating substances due to the modification of effects of PGI2 and TXA2[27-29]; increase in the release of endothelium-derived vasoconstrictor substances such as serotonin and TXA2 through the cyclooxygenase pathway[22,27].

The above effects have been shown in vivo and in vitro in experimental models of rabbit aorta, monkey iliac artery, pig coronary artery and human coronary arteries[28]. Our study did not investigate these effects, but the effect of hypercholesterolemia on hydroxyproline level and blow-out pressure was emphasized.