AIM: To investigate the effect of Patrinia scabiosaefolia (PS) on the cholecystokinin (CCK) octapeptide- induced acute pancreatitis (AP) in rats.

METHODS: Wistar rats weighing 240-260 g were divided into three groups: (1) Normal saline-treated group; (2) treatment with PS at 100 mg/kg group, in which PS was administered orally, followed by subcutaneous administration of 75 µg/kg CCK octapeptide three times after 1, 3 and 5 h, and this whole procedure was repeated for 5 d; (3) treatment with saline group, in which the protocols were the same as in treatment group with PS. We determined the pancreatic weight/body weight ratio, the levels of pancreatic HSP60, HSP72 and the secretion of pro-inflammatory cytokines. Repeated CCK octapeptide treatment resulted in the typical laboratory findings of experimentally induced pancreatitis.

CONCLUSION: Pretreatment with PS has an anti-inflammatory effect on CCK octapeptide-induced AP.

Acute pancreatitis (AP) is characterized by local pancreatic inflammation as well as a systemic inflammatory response[1,2]. Histologically, AP is characterized by interstitial edema, vacuolization, inflammation, and acinar cell necrosis[3,4]. A widely used model to study these responses is acute pancreatitis induced in rats and mice by high doses of cholecystokinin (CCK) or its analogue, cerulein[5]. CCK is a major physiologic regulator of digestive enzyme secretion by the pancreatic acinar cell; however, supraphysiologic doses of CCK (in excess of those that stimulate maximal secretion of digestive enzymes) are injurious to the pancreas, causing pancreatitis that mimics many features of the human disease[5-8].

Cells could respond to heat shock or other stress with the rapid synthesis of heat-shock proteins (HSPs). The induction of the heat shock response enhances the ability of the cells to overcome the effects of the stress[9]. These proteins are classified by their molecular mass (e.g., HSP60 and HSP72). It was reported that the pre-induction of HSP expression has a protective effect against cerulein-induced pancreatitis in rats or choline-deficient ethionine-supplemented diet model pancreatitis in mice[10-12].

Iridoid compounds represent a large group of the cyclopentano[c]pyran monoterpenoids found in many plants. These compounds exhibit various antimicrobial, antitumoral, hemodynamic, and anti-inflammatory activities[15]. Patrinia scabiosaefolia (PS) (Valerianaceae) is well-known in oriental traditional medicine. Its roots or whole plants have been used for treatment of various diseases, including edema, appendicitis, endometritis, and inflammation[16]. However, the effect of PS on AP has not been investigated as yet. Hence, in this study, we aimed to investigate the effect of PS on the CCK octapeptide-induced AP. We examined pancreatic weight/body weight ratio, serum amylase and lipase levels, and also investigated the effect of PS on pancreatic HSP60 and HSP72 expression in CCK octapeptide-induced AP. We wished to evaluate whether PS can block pro-inflammatory cytokine synthesis during CCK octapeptide-induced AP.

PS was prepared by decocting the dried prescription of herbs with boiling distilled water. The decoction time was about 3 h. Their voucher specimens were deposited at the Herbarium at the College of Oriental Medicine, Kyung-Hee University.

Male Wistar rats weighing 240-260 g were kept at a constant room temperature of 25 °C with a 12-h light–dark cycle, and were allowed free access to water and standard laboratory chow. The rats were fasted for 16 h before the induction of AP. Rats were divided into three groups, each group containing 6-8 rats. The experiments performed in this study were approved by the Animal Care Committee of the University.

In vivo models of pancreatitis

In PS-treated group, 100 mg/kg PS was systemically administrated orally, followed by subcutaneous administration of 75 µg/kg CCK octapeptide three times after 1, 3, and 5 h, and this whole procedure was repeated for 5 d. In AP group, saline was systemically administered orally instead of PS, but otherwise the protocol was the same as in treatment group with PS. Normal untreated group received physiological saline orally instead of PS. The animals were sacrificed by exsanguinations through the abdominal aorta 12 h after the last CCK octapeptide injection. The pancreas was quickly removed, cleaned from fat and lymph nodes, weighed, and frozen at -70 °C until use. Rats were treated in accordance with the current law and the NIH Guide for Care and Use of Laboratory Animals.

This ratio was utilized to evaluate the degree of pancreatic edema.

Western blot analysis of pancreatic HSP60 and HSP72 levels was performed from the cytosolic fraction of the pancreas homogenate. Thirty micrograms of protein was loaded per lane. Samples were electrophoresed on a 100 g/L SDS-PAGE according to the method of Laemmli[17]. The gels were either stained with Coomassie brilliant blue (to demonstrate equal loading of proteins for Western blot analysis) or transferred to a nitrocellulose membrane for 2 h at 300 mA. Membranes were blocked in 50 g/L nonfat dry milk for 1 h and incubated with anti-HSP60 and anti-HSP72 antibodies. After washing in PBS/Tween-20 three times, the blot was incubated with secondary antibody for 30 min, and the antibody-specific proteins were visualized by the enhanced chemiluminesence detection system according to the recommended procedures (Amersham Corp. Newark, NJ).

ELISA for TNF-α, IL-1β and IL-6 was carried out in duplicate in 96-well plates (Nunc, Denmark) coated with each of 100 µL aliquots of anti-rat TNF-α, anti-rat IL-1β and anti-rat IL-6 monoclonal antibodies at 1.0 µg/mL in PBS (pH 7.4), followed by incubation overnight at 4°C. The plates were washed with PBS containing 0.5 g/L Tween-20 (Sigma, St. Louis, MO, USA) and blocked with PBS containing 10 g/L BSA, 50 g/L sucrose and 0.5 g/L NaN3 for 1 h. After additional washes, standards were added and incubated at 37 °C for 2 h, followed by washing of the wells, addition of each of 0.2 mg/L of biotinylated anti-rat TNF-α, anti-rat IL-1β and anti-rat IL-6 antibodies, and incubation at 37 °C for 2 h. After washing the wells, avidin-peroxidase was added and plates were incubated for 20 min at 37 °C. Wells were again washed and ABTS substrate was added. Color development was measured at 405 nm using an automated microplate ELISA reader. A standard curve was run on each assay plate using recombinant TNF-α, IL-1β and IL-6 in serial dilutions.

Measurement of serum amylase and lipase

Arterial blood samples for determinations of serum amylase and lipase were obtained 12 h after induction of pancreatitis. Rats were anesthetized with intraperitoneal injection of ketamine (80 mg/kg) and xylazine (4 mg/kg). After anesthetization, blood was withdrawn from heart of each rat into syringes. Serum amylase was measured by using an ADIVA 1650 (BAYER, USA). Serum lipase was measured by using a Cobas-mira (Roche, USA).

Results were expressed as means ± SE. The significance of changes was evaluated using student’s t test. Differences between the experimental groups were evaluated by using analysis of variance. P values less than 0.05 were considered statistically significant.

It has been shown that pancreatic weight (pw)/body weight (bw) ratio is increased in CCK octapeptide-induced pancreatitis in rats[18]. To assess the effect of PS on the pw/bw ratio during CCK octapeptide-induced AP, we divided the pancreatic weight by the body weight of rats. We found that PS significantly decreased pw/bw ratio compared with saline-treated group (P <0.05) (Figure 1). 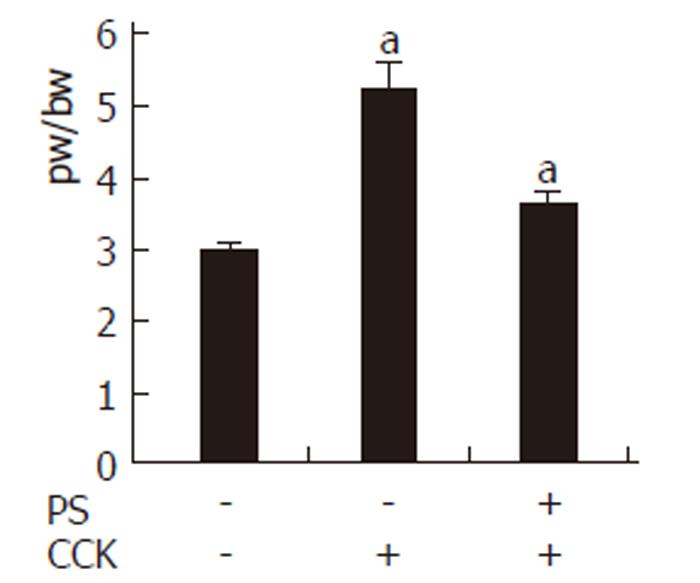 The levels of serum amylase and lipase are most commonly obtained as biochemical markers of pancreatic disease, particularly AP. Amylase activity in serum has been used for many years for the evaluation of patients with acute abdominal pain and suspected pancreatic disorders[19]. Elevation of the levels of pancreatic lipase in plasma or serum is often considered to be the most sensitive and specific marker of AP[20]. PS reduced the activities of serum amylase and lipase in CCK octapeptide-induced AP (Figure 2).

Figure 2 PS inhibition of serum amylase and lipase levels in CCK octapeptide-induced AP in rats. Values are expressed as mean ± SE for at least 6 animals per group. P < 0.05 vs control group. 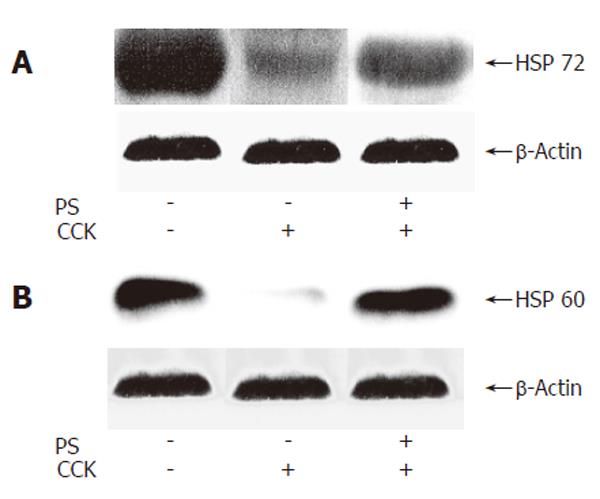 Various cytokines (TNF-α, IL-1β and IL-6), released locally and systemically, have been implicated in the inflammatory response associated with pancreatitis. The production of these cytokines has been shown to increase in serum during CCK octapeptide-induced AP[23-25]. In this study, we found that PS pretreatment significantly decreased the levels of TNF-α, IL-1β and IL-6 production during CCK octapeptide-induced AP (Figure 4). 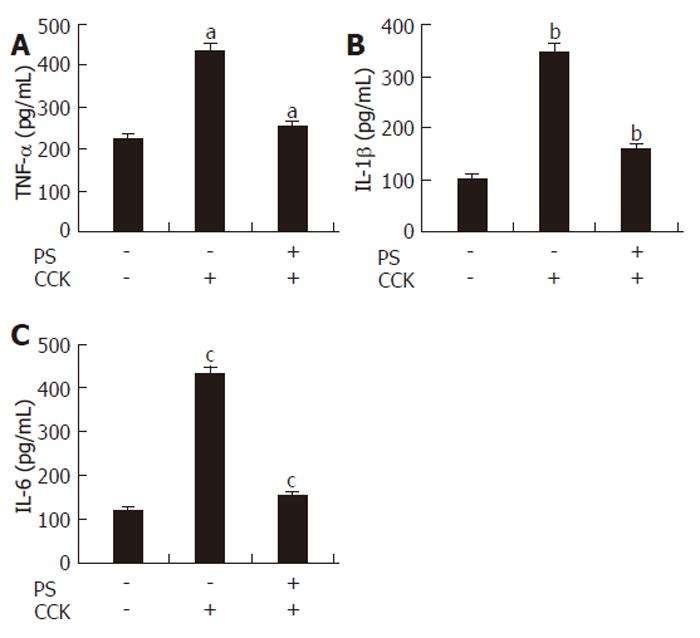 Figure 4 Effect of PS on TNF-α, IL-1β and IL-6 secretion in CCK octapeptide-induced AP. Data are expressed as mean ± SE for 6 animals in each group. P < 0.05 vs control group.
DISCUSSION

PS has been used for treatment of various diseases, including edema, appendicitis, endometritis, and inflammation[16]. On the basis of the idea that the expressions of HSPs, such as HSP 60 and HSP72, in pancreas play a key role in the inflammatory response of pancreatitis, we determined whether PS could increase expression of HSP in CCK octapeptide-induced AP. HSPs play a universal role in the maintenance of cellular homeostasis[22]. They are expressed constitutively and/or at elevated levels upon the exposure of cells to a variety of stress conditions in every organ, including pancreas[21,26]. Previous reports of the effects of cerulein-induced AP on pancreatic HSP levels are somewhat conflicting[27-31]. Ethridge et al[28] found that the pancreatic heat shock factor 1 (HSF-1) binding activity was increased during cerulein-induced AP, with concomitant increases in HSP70 and HSP27, while the levels of HSP60 and HSP90 were not affected. Similarly, Weber et al[27] demonstrated that cerulein induced pancreatic HSP70 mRNA and protein expressions. However, secretagogue treatment did not alter the level of ubiquitin mRNA. Using antisense oligonucleotides, Bhagat et al[29] have shown that cerulein-induced HSP72 expression acts to limit the severity of the disease in rat. Strowski

et al[30] observed that cerulein time- and dose-dependently increased mRNA but paradoxically reduced protein levels of rat pancreatic HSP60 and HSP72. In accordance with their study, we demonstrated that repeated injections of supramaximal doses of CCK octapeptide for 5 d reduced the pancreatic HSP60 and HSP72 levels[18,32]. However, this decrease was recovered by the administration of the PS. Therefore, PS acted against the effect of CCK octapeptide-induced pancreatitis to decrease the levels of these HSPs, and clearly increased the protection against the disease as discussed below. Since we only examined the quantities of the most widely investigated HSP60 and HSP72, we could not rule out that other HSPs were induced and contributed to the protective effects of PS.

These cytokines (TNF-α, IL-1β and IL-6) are thought to mediate the systemic effects of pancreatitis, such as fever, hypotension and shock[8]. Serum levels of TNF-α, IL-1β and IL-6 are used to evaluate the systemic cytokine response. TNF-α has been shown to be an important initiator of the local and systemic damage occurring in AP[33]. The overall rise in both tissue and serum TNF-α concentrations correlates directly with the severity of pancreatic damage and inflammation[34]. Additionally, serum levels of TNF-α have been found to correlate with severity of AP in humans[24]. IL-1β is another potent pro-inflammatory cytokine, which, like TNF-α, is derived predominantly from macrophages[35]. Combined infusions of TNF-α and IL-1β have synergistic pro-inflammatory effects[36]. Using knockout (-/-) mice deficient in IL-1 type 1 receptors, TNF type 1 receptors, or both, it has been shown that IL-1β and TNF-α make an equivalent contribution to the severity of an attack. Preventing the activity of both cytokines concurrently has no additional effect on the degree of pancreatitis[37].

IL-6, a principal mediator of acute phase response, is primarily released from activated mononuclear phagocytes. Pooran et al[38] showed that IL-6 levels in severe pancreatitis were significantly elevated compared with mild pancreatitis[38,39]. As aforementioned, we demonstrated that PS could reduce TNF-α, IL-1β and IL-6 production during CCK-induced AP in rats.