AIM: To investigate the biological function of HBcAg in pathogenesis of HBV replication in peripheral blood mononuclear cells (PBMCs).

Hepatitis B virus (HBV) infection is a global challenge with 350 million chronic carriers world wide. Individuals with chronic HBV infection have a high risk of developing liver cirrhosis and primary hepatocellular carcinoma[1,2]. HBV is a partially double-stranded DNA with compact circular genome of about 3200 base pairs (bp) containing four overlapping open reading frames P, preS/S, preC/C and X. C region coding for the HBV core antigen (HBcAg)[3,4] is a 21-22 kD protein that self-assembles to form the subviral 30-32 nm nucleocapsid particles packing the viral polymerase and pregenomic RNA during HBV replication. HBcAg can prevent the degradation of mRNA by RNA-enzyme and plays a very important role in assembling pregenome and synthesizing genome[5-7].

Some researchers have detected HBV nucleic acids including replicating intermediates, covalently closed circular DNA(cccDNA),viral RNA transcripts and DNA sequences intergrated with the celler genome in PBMCs from patients with active chronic hepatitis B (CHB)[8-13]. It was reported that patients with hepatocelluer carcinoma (HCC) display a higher prevalence of HBV in PBMCs than asymptomatic carriers and CHB patients or liver cirrhosis patients, although the detection rate of viral replication is low in HCC patients[14]. Viral load in serum is thus not always associated with the prevalence of HBV DNA in PBMCs, and cccDNA may exist even in patients with undetectable HBV DNA from serum by PCR. The pathogenesis of replication and integration of HBV in PBMCs is unclear. However, it may be contribute to viral escape from the immune system and pathogenesis of lympho-proliferative disorders[15].

In order to further reveal the biological role of HbcAg in pathogenesis of replication and integration of HBV in PBMCs, we tried to identify its associated proteins in the present study by the GAL4-based yeast two-hybrid system using HbcAg as bait to screen the human leukocyte cDNA library. 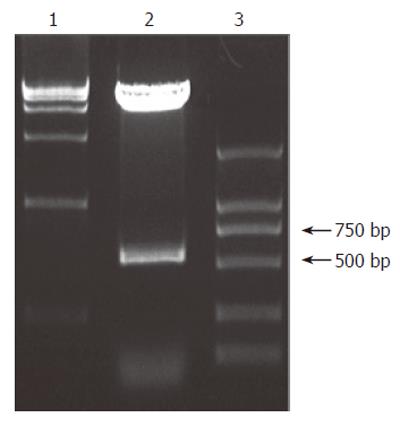 Denatured cell extracts were subjected to electrophoresis using 4-12% SDS-polyacrylamide gels and transferred to nitrocellulose membranes as previously described[17]. The membranes were blocked with 5% nonfat dry milk for 1 h and then incubated with monoclonal anti- c-myc antibody (Santa Cruz Biotechnology INC, Santa Cruz, CA, USA) for 2h followed by HRP-conjugated secondary antibody for another 1h prior to detection of antibody reactive proteins.

The screening of leukocyte cDNA library was performed as previously described[18,19]. One large (2-3mm) fresh (<2 mo old) colony of AH109 [bait] was inoculated into 50 mL of SD/-Trp and incubated at 30 °C overnight (16-24 h) with shaking at 250-270 r/min. Then the cells were spun down by centrifuging the entire 50-mL culture at 1000r/min for 5 min and supernatant decanting the cell pellet was re-suspended in the residual liquid by vortexing. The entire AH109 [bait] culture (beyond 1:109) and 1mL library (beyond 1:109) were combined and cultured in a 2L sterile flask and 45 mL of 2 X YPDA/Kan was added and swirled gently. After 20 h mating, the cells were spun down, re-suspended and spread on 25 large (150 mm) plates containing 200 ml of SD/-Ade/-His/-Leu/-Trp (QDO) or 200 ml of SD/-His/-Leu/-Trp (TDO). After 6-18 d, the yeast colonies lager 3 mm in diameter were transferred onto the plates containing X-α-Gal to check expression of the MEL1 reporter gene (blue colonies).

Yeast plasmid was isolated using the lyticase method (Clontech Co., USA). The plasmid was transformed into E. coli strain DH5α. Transformants were plated on ampicilin LB selection media (SOB) and plasmids were isolated from E. coli. Restriction digestion and sequencing analysis were carried out. After the positive colonies were sequenced, the sequence was blasted with GenBank to analogize the function of the genes[20,21].

The coding sequence of new gene was obtained from the cDNA library of proteins binding to core protein of hepatitis B virus by bioinformatic methods, named C1. Standard PCR cloning technique was used to amplify C1 gene. Cytoplasmic RNA of Jurkat cells was isolated and used for RT-PCR. The primer sequences of the sense and antisense are 5’-GAA TTC ATG GAG GAG GTC ATA C-3’ and 5’-GGA TCC TTA CCA GGG ACA CAG T-3’, respectively. The PCR products were cloned with pGEM-T vector (Promega Co., USA). Primary structure of the insert was confirmed by direct sequencing.

The full-length HBcAg gene was cloned into the yeast two-hybrid BD vector at the EcoR I and Pst I sites. The construct was verified by restriction digestion and sequencing (Figure 1).

Western blotting was performed to confirm the expression of the fusion protein using c-myc monoclonal antibody. Yeast strain AH109 transformed with pGBKT7-HBcAg could stably express the fusion protein at a high level but could only grow on SD/-Trp medium (Figure 2). 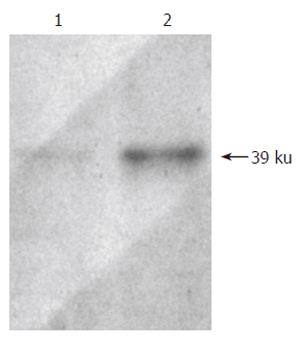 HBV-core protein was used as the bait for screening human yeast-two hybrid leukocyte cDNA library. The clones growing in the absence of tryptophan, leucine, histidine and adenine were processed for β-galactosidase assay, and blue colonies were picked. As the plasmid pACT2 contains two sites for BglII enzyme digestion, we could get the screening gene fragment of leukocyte library by BglII enzyme digestion (Figure 3). The different size of DNA segments showed that the screening colonies were positive clones. 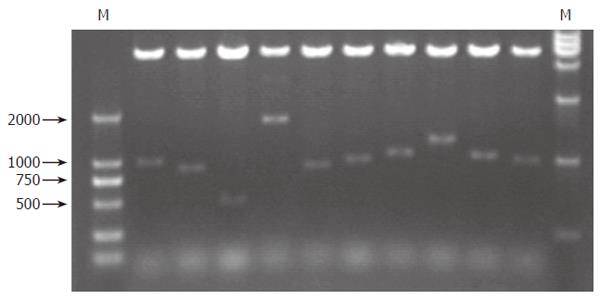 Nucleotide sequences of the clones from the cDNA library were analyzed, the full-length sequences were obtained with Vector NTI 6 and BLAST database homology search (http://www. ncbi. nlm. nih. gov/) (Table 1).

The PCR products were cloned with pGEM-T vector. The direct sequencing showed the ORF of C1 (Figure 4, Figure 5). The full length of the coding rank contained 366 nucleotides, and the coding product consisted of 121 amino acid residues (GenBank accession number: AY555145). 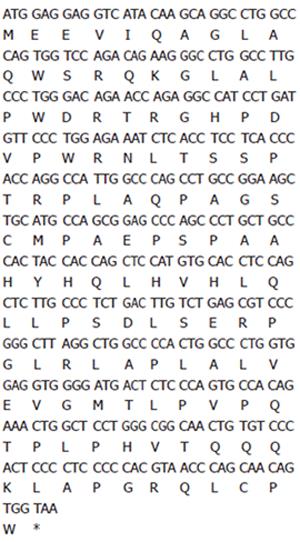 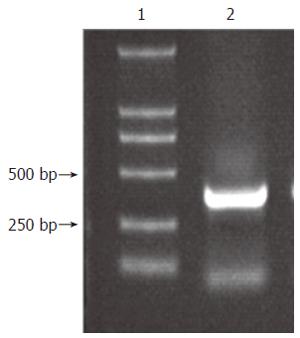 To confirm the true protein-protein interaction（protein of HBcAg and new gene C1-translated protein）in yeast, mating experiments were carried out by mating yeast strain AH109 containing the plasmid of pGBKT7-HBcAg with Y187 containing pGADT7-C1. The diploid yeast cells were plated on QDO (Figure 6). 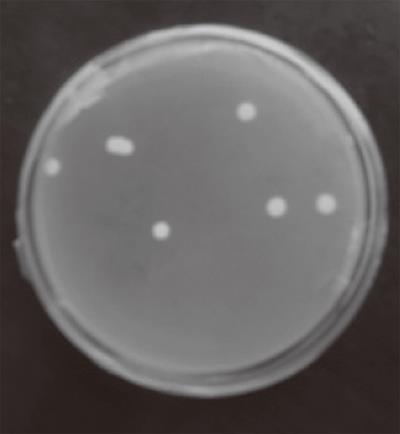 The interaction of proteins is the basement of life, and gene shows its function only by this way. The yeast-two hybrid system relies on the modulating properties of eukaryotic site-specific transcriptional activators for the detection and analysis of protein-protein, protein-DNA and protein-RNA interactions. This onslaught of genomic information calls for the development of efficient experimental strategies to gain insight into the organization and function of the encoded proteins. The yeast-two hybrid system can detect protein-protein interactions. Yeast-two hybrid system 3 is based on the originally designed system[23-25]. In this system, the promoters controlling HIS3, ADE2, and MEL1 expression in AH109 have significantly fewer false positives and the simple mating protocol significantly reduces the labor and time involved in performing a yeast-two hybrid library screening and improves the chances of finding rare protein-protein interactions and leads to more reproducible results[26,27].

HBcAg has a conservative three-dimensional structure, 21 kD. Its C-terminal 150-185 aa is rich in arginine region. One function of the arginine-rich region is to provide interactions between core protein and RNA pregenome. Packaging the viral pregenomic RNA into HBV nucleocapsid (core particle) is a crucial function of the core protein[28]. The C-terminal is in the region of interaction between HBcAg and RNA/DNA and is phosphorlated by cell kinase. Phosphorylation is very important for the synthesis and replication of DNA. Phosphorylation of the core protein is an important step in viral replication cycle necessary for transport of the viral genome to the nuclei[29,30]. HBV capsid or core protein binds to nucleic acid through a carboxy-terminal protamine region containing nucleic acid-binding motifs organized into four repeats (I to MV). Core proteins contain nuclear localization signals (NLS) in their COOH termini and mediate HBcAg into nuclei[29,31]. HBcAg showing a high immunogenicity can directly activate B lymphocytes by binding to the region of FR1-CDR1 of B cells[7].

HBV has been found in numerous extrahepatic cells including PBMCs. However, their role in HBV infection and viral persistence remains unclear. The presence of HBV-DNA and HBV-RNA in PBMCs has been demonstrated by Pontisso et al[32]. Polymerase chain reaction (PCR) showed that HBV infection of PBMCs is a common event in acute and chronic hepatitis B[33]. Since HBV is cytopathogenic, viral proteins elicit a modulating influence on the gene expression of infected immunocompetent cells[34].

In our study, the bait plasmid pGBKT7-HBV core was constructed and the gene of HBcAg was expressed in yeast AH109. We identified 18 colonies coding for 11 different proteins. These genes encode proteins involving in cell signal transduction, cancer development, and immunity pathogenesis. The two families of chemokines were distinguished on the arrangement of the first two of four conserved cysteines. The α-chemokine is characterized by two cysteine amino acids separated by another amino acid (C-X-C motif), while the β-chemokine has two adjacent cysteine residues (C-C motif). The majority of β-chemokines are monocyte chemoattractants. Chemokine receptors are members of the seven receptors of transmemberane or serpentine family[35,36]. The receptors are G-protein-linked and transducer signals via phospholipase C. This subsequently leads to a rise in intracellular calcium concentration and activation of protein kinase C. Chemokine (C-C motif) receptor 5 contains monocytes, but it was reported that CCR5 can be expressed on Th1 and Th2 cells selectively[37]. HIV can infect the Th1 cells by synergistic action of CCR5, and cause fusion of the infected cells and HIV diffusion[38]. A candidate tumor suppressor gene hypermethylated in cancer (HIC-1) has been identified because of its association with a “CpG island” at 17p13.3 that is hypermethylated and transcriptionally inactivated in several common types of human cancers[39]. HIC encodes a typical nuclear BTB/POZ protein with five Kruppel-like C2H2 zinc finger motifs in its C-terminal and a BTB/POZ domain at its N-terminal. BTB/POZ protein found in developmentally regulated transcription factors and actin-binding proteins is associated with C2H2 zinc finger motifs in proteins involved in transcriptional regulation through chromatin modeling[40,41]. Kyot binding protein genes code for KBP1, KBP2, KBP3. KyoT2 binds to KBP in LIM, which is rich in amino-3-mercaptopropionic acids and can bind to ZN and protein kinase C[42]. RanBPM cDNA codes for a 90 kD protein. RanBPM is a peripheral membrane protein. Integrins and RanBPM interact in vitro and in vivo and co-localize on the cell membrane. RanBPM may constitute a molecular scaffold that contributes to coupling. The leukocyte integrin lymphocyte function-associated antigen 1 (LFA-1) and other integrins are found to intracellular signaling pathways. Ran is a Ras-like GTPase, which can transport nucleoplasm, assemble microtubules and form nuclear membrane. RanBPM exists in the center of cells as a receptor of Ran related with transport nucleoplasm[43-45].

In our study, 4 new genes with unknown function were identified. One of these new genes was named C1 with no homology sequence in GenBank. By electron splicing, the opening reading code framework and full-length of this gene were concluded. The gene can be transcripted from the mRNA of Jurkat cells by RT-PCR. The PCR product was analyzed by T-A sequence. The full length of the coding rank contained 366 nucleotides, and the coding product consisted of 121 amino acid residues. The pGADT7-C1 plasmid was constructed and transformed into the yeast strain Y187. The Y187and AH109 were mated, the result showed that the two proteins could bind to each other.

In conclusion, HBcAg can bind to proteins in leukocytes.