AIM: To study the role of an insertion/deletion polymorphism in the pepsinogen C (PGC) gene, an effective marker for terminal differentiation of the stomach mucosa, in the susceptibility to the development of gastric lesions.

CONCLUSION: Our study reveals that the Allele 6 carrier status has a protective role in the development of gastric lesions, probably due to its association with higher expression of PGC. Moreover, the frequency of Allele 6 carriers in the control group is far higher than that obtained in Asian populations, which might represent a genetic gap between Caucasian and Asian populations.

Gastric adenocarcinoma (GC) is a major public health problem worldwide and the third cause of cancer-related mortality in Europe[1-3]. In Portugal, gastric cancer represents a sixth of all cancer related deaths, with twice the average mortality of European Union and the highest among Western European countries 25/100 000 and 12/100 000 persons × year in men and women, respectively[4,5]. Portuguese inhabitants show a life-time risk for gastric cancer of approximately 2% (95% CI 1.9-2.1), with half the decline observed at other European countries during the last decade[6].

Lauren’s classification is most commonly used for gastric adenocarcinoma because of its epidemiologic importance[2,7]. It defines two main morphological types: ‘diffuse type’ and ‘intestinal type’. The latter is characterized by a stepwise transformation from normal mucosa through atrophic gastritis, atrophy, intestinal metaplasia and dysplasia to invasive gastric adenocarcinoma[2,8]. This type shows a male:female ratio of 2:1 and it has been related mostly to environmental factors such as H pylori infection and diet[2,6].

However, recently several host genetic variations have been regarded as potential risk markers[9-18]. Pepsinogen is an effective marker of terminal differentiation of the stomach mucosa[19,20]. Pepsinogen C (PGC) is mainly secreted by chief cells of gastric gland, while also by cardiac, pyloric and Brunner glands. Its serum levels have been related with atrophic changes in gastric mucosa and extension of intestinal metaplasia[21,22]. The pepsinogen C (PGC) gene, localized on chromosome 6 between regions 6p11-6p21.3, encodes the PGC, also known as progastricsin, which is the precursor of pepsin C or gastricsin++[20]. Taggart et al have described an insertion/deletion polymorphism of about 100 bp located between exons 7 and 8[23-25], which was regarded as a susceptibility marker for the development of gastric adenocarcinoma[26]. However, the role of this polymorphism has not been completely established and it has never been measured in Caucasian populations.

The aim of this control study was to evaluate the role of the PGC polymorphism in the development of GC within a southern European population from the north region of Portugal.

A cross-sectional study was performed among healthy individuals without clinical evidence of cancer (n = 127 as control group) and consecutive patients with known gastric lesions (n = 99), both from the northern region of Portugal attending at the Portuguese Institute of Oncology of Porto (Portugal).

Patients were further divided according to the type of lesions presented upon histopathological diagnosis after endoscopic multiple biopsies. It included patients who displayed lesions as severe as high-grade dysplasia and intestinal type invasive gastric adenocarcinoma (n = 52) and patients with non-dysplastic but associated lesions with gastric adenocarcinoma such as atrophy or intestinal metaplasia (n = 47), who belonged to a standardized follow-up since 2001.

All individuals included in this study gave their informed consent before their inclusion in the study, according to the Declaration of Helsinki.

Blood samples were obtained with a standard venipuncture technique using EDTA containing tubes, and the genomic DNA was extracted from the white blood cell fraction of each sample, using a standard salting out protocol[27].

The analysis of PGC polymorphism (insertion/deletion of approximately 100 bp) located between exons 7 and 8 was carried out by polymerase chain reaction (PCR), as described by Yamagata et al[15]. The PCR reaction was performed with the antisense (PGCa: 5’-AGCCCTAAGCCTCTTTTTGG-3’) and sense primers (PGCb: 5’-GGCCAGATCTGCGTGTTTTA-3’) in a 50 μL PCR reaction mixture containing: 1 × Taq buffer, 1.5 mmol/L of MgCl2, 0.2 mmol/L of dNTPs, 0.25 μmol/L of each primer and 1 U Taq DNA polymerase (Amersham Bioscience, USA). Cycling parameters are: 95°C for 5 min for Taq DNA polymerase activation, followed by 35 cycles of denaturation for 60 s at 94°C, annealing for 60 s at 55°C, extension for 60 s at 72°C and a final extension step at 72°C for 7 min. 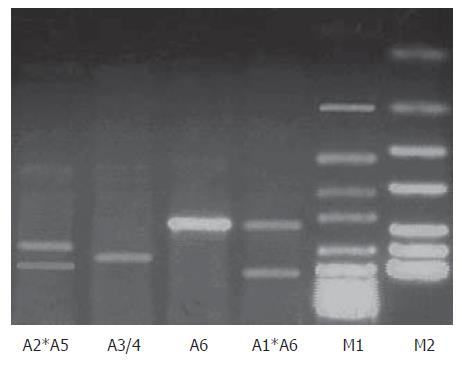 The study variables included gastric type of lesion: gastric adenocarcinoma or atrophy or intestinal metaplasia or its absence and PGC alleles (1-6).

Data analysis was performed using the computer software Statistical Package for Social Sciences - SPSS for Windows (version 11.5). Chi-square analysis was used to compare categorical variables, using a 5% level of significance. Logistic regression was used to estimate odds ratio (OR) and its 95% CI as a measure of the association between PGC Allele 6 carrier and risk for the development of gastric lesions.

The allelic distribution of the PGC polymorphism is shown in Table 1. No significant differences between controls and patients with known gastric lesions were observed as far as Alleles 1 to 6 were concerned.

Gastric adenocarcinoma (GC) has distinct geographical distribution with the highest incidence rates in Asian countries, and it remains as the third cause of cancer-related mortality in Europe[1-3]. Portugal has the highest incidence and mortality rates of Western Europe[6]. On the other hand, it is well accepted that cancer is a multifactorial disease and that genetic polymorphism may influence the genetic susceptibility to the development of several cancers[9-18].

Pepsinogen, an effective marker of terminal differentiation of the stomach mucosa, has been used as a serological test for more than 20 years[21]. An insertion/deletion polymorphism in the PGC gene has been described as a susceptibility marker for the development of gastric adenocarcinoma. However, only a few studies have been published on pepsinogen C[24-26,28,29]. Up to our knowledge, this is the first study within a southern European population, from the north region of Portugal.

Our results suggest that Allele 6 carriers have protec-tion against the development of gastric lesions such as atrophy, intestinal metaplasia or invasive carcinoma. These results are not in concordance with the results in Asian populations (Table 3). By comparison with the results from Asian populations we observed that carriers of this allele were more frequent in our control group, which might represent a genetic gap between Caucasian and Asian populations. However, when we compared the Allele 6 distribution in the Chinese control population, no homogeneous frequencies were reported. Furthermore, the Allele 6 distribution we found within the Portuguese population is not significantly different from one of the Chinese reports[26].

Even though our study included a small sample of cases, both allelic distribution and risk estimate seemed to exclude a type I error. A cohort study would seem ideal to estimate accurately risks, however, only a few if any cohort studies in this field are published. The recruitment of controls and the follow-up of patients with atrophy and intestinal metaplasia and with the absence of Allele 6 will probably give us more information in the near future.

The role of the PGC polymorphism in the carcino-genesis of GC is not clear. It was reported that PGC was not only a digestive enzyme, but also a growth factor under strict conditions, whereby the levels of serum expression of PGC might play important roles. This PGC polymorphism is located between exons 7 and 8, and by the analysis of the genomic sequence (Genome USCS NM_002630; Ref. NM_002630.1) with the Discovery Studio Gene v1.5 (Accelrys Inc), it is possible to identify, within the polymorphic region, an extensive number of TATA-box sequences. TATA-box sequences are extremely important in the activation of gene expression.

We hypothesize that this insertion/deletion polymorphism interferes directly with the number of TATA-box accessible for the activation of PGC expression. Usually as many TATA-boxes are available, as many expressions we could achieve. Although, in the presence of a great number of TATA-boxes, altogether in sequence, they might function as a confounder for the transcriptional activation factors. Thus, if a deletion occurs in a site like this, it would stabilize the activation of gene expression, increasing its levels. Evidences of higher levels of PGC associated with pre-neoplastic lesions could be correlated with this gene expression stabilization[22,30].

Although further studies are required to establish the role of this polymorphism in the development of GC, our study reveals that PGC Allele 6 (shorter allele) is associated with protection against development of gastric lesions in a Caucasian population.