AIM: To elucidate the role of Wnt/β-catenin signaling pathway in pancreatic development of rat embryo.

METHODS: The mRNAs of β-catenin, APC, cyclin D1 genes were amplified by means of semiquantitative reverse transcription polymerase chain reaction (RT-PCR) from embryonic pancreas in different periods and normal pancreas of rat, respectively. Protein expression of these genes in embryonic pancreas of E14.5-E18.5 was examined by immunohistochemical method.

The fetal pancreatic development begins at the end of fourth week of gestational period in human being. The pancreatic bud comes from entodermal epithelium in the foregut. In rat embryo the pancreatic bud occurs at 9.5 d after mating (E9.5)[1]. With pancreatic islet arising, the rat embryonic pancreas began to become a special organ including external secretory portion and internal secretory portion. E14.5 - E18.5 is a crucial period for rat pancreatic cell proliferation, differentiation and structure formation[2-3]. Wnt/β-catenin signaling is involved in many developmental processes such as proliferation, differentiation, cell fate decisions, and morphogenesis[4]. However, little is known about Wnt/β-catenin signaling during pancreas development. β-catenin serves not only as a structural component of the E-cadherin-mediated cell-cell adhesion system, but also a signaling molecule of the Wnt/β-catenin pathway. In present study, we tried to investigate the role of Wnt/β-catenin signaling pathway in rat pancreatic development by means of RT-PCR and immunohistochemical method for collecting more data on diagnosis and therapy of pancreatic diseases.

Healthy SD rats (male 10 and female 20), weighing 200-250 g, were purchased from the experimental animal center in Huaxi University of Medical Sciences, Chendu, China. Every two female rats and one male rat was put into one cage after these animals were fed for a week. Assessment of the embryonic age of the fetuses was based on the plug date, defined as embryonic d 0 (E0). The embryos were harvested from female rats with E14.5, E15.5, E16.5, E17.5 and E18.5, respectively. A part of pancreases was rapidly frozen in liquid nitrogen as soon as they were dissected from embryos under microscope.

Semiquantitative PCR was performed to determine the levels of the mRNA transcripts encoding β-catenin, APC and cyclinD1 genes in embryonic pancreas on E14.5-E18.5. The published sequences of the primers for amplification of β-catenin, APC, cyclinD1 and the housekeeping gene β-actin are showed in Table 1. To determine the optimum number of cycles required for the amplification of these genes or β-actin, an aliquot of first strand cDNA generated from normal rat pancreas was amplified with the respective primers using an increasing number of PCR cycles (20-36). To avoid primer-dependent artifacts, the reaction mixtures were denatured at 95 °C for 5 min prior to the addition of the Taq polymerase. The subsequent cycling programs consisted of denaturation at 95 °C for 30s, annealing at 60 °C (Table 1) (β-actin for 30 seconds) and extension at 72 °C for 1 min, followed by a final extension at 72 °C for 8 min. A linear relationship between the band intensity of the PCR products and the number of amplification cycles performed was observed. Based upon these observations, the optimum numbers of cycles for the amplification of these genes were 28-30 cycles and of β-actin was 28 cycles. PCR reactions in which the first strand cDNA were omitted served as negative controls and cDNA generated from endometrial samples were used as positive controls for these studies. To avoid technical error, each PCR experiment has been repeated twice. The PCR products were separated on 1.5% agarose gels, stained with ethidium bromide, and photographed using Gel Imaging System (BioRad, USA). The intensity of the bands specific for each target gene or β-actin was quantified using the Phoretix Gel Analysis Software Version 3.01 (NonLinear Dynamics, UK). The relative mRNA levels of these genes for each sample obtained from embryonic pancreas of E14.5-E18.5 were normalized to the corresponding β-actin levels.

The avidin-biotin peroxidase complex (ABC) technique was used for immunohistochemical staining. Sections were cut at 5µm thickness, deparaffinized in xylene, rehydrated and washed with water. They were treated with 3% hydrogen peroxidase for 20 min to quench endogenous peroxidase and heated in a citrate buffer solution (0.1 mol/L sodium citrate, pH 6.0) at 95°C for 10 min. After pre-incubation with 10% normal goat serum to block non-specific binding, sections were incubated with the primary antibodies against β-catenin, APC and cyclin D1 at 4°Covernight. Alternatively, the sections were incubated with biotinylated anti-rabbit or mouse IgG (dilution of 1∶200) for 40 min at room temperature and with ABC (dilution of 1∶200) for 30 min at room temperature. Between incubations, sections were washed with 0.1 mol/L PBS (pH7.4). Color was developed with diaminobenzidine tetrahydrochloride supplemented with 0.04% hydrogen peroxidase and counterstained with Mayer’s hematoxylin.

The results of semiquantitative RT-PCR are presented as the ratio of the mean relative absorbance of β-catenin, APC and cyclin D1 to corresponding β-actin respectively for at least three independent experiments of each sample. Statistical differences among different periods of embryo were assessed by t test. A P ＜ 0.05 was considered significant. 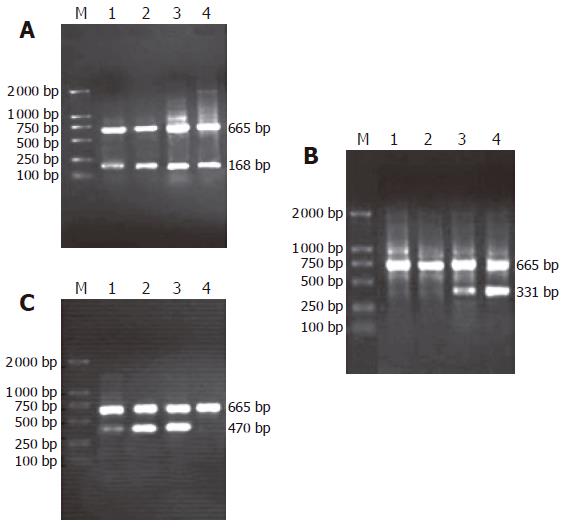 We examined the β-catenin, cyclinD1 and APC protein in embryo from E14.5-E18.5 by immunohistochemical staining. Representative results are shown in Figure 2 (A-D). In the embryo of E14.5, β-catenin staining appeared at the cytoplasm of pancreatic cells. The cells with positive staining showed a diffuse distribution in embryonic pancreas. In the embryo of E18.5, we could observe full pancreas including external and internal secretion portions in morphology. At the same time, our results showed that β-catenin could be detected frequently both in external and internal secretion portions. The positive cells of cyclinD1 with diffuse distribution were observed in the pancreas of E14.5. The positive staining located in the cytoplasm and/or nuclei of pancreatic cells. In pancreas of E18.5, the expression of cyclinD1 protein was significantly higher than that in other period. However, none of positive cells expressing cyclinD1 protein was observed in adult pancreas. Expression of APC has not been observed in the early embryonic pancreas until E18.5. In contrast, the positive cells of APC staining scattered throughout the pancreas in adult rat. 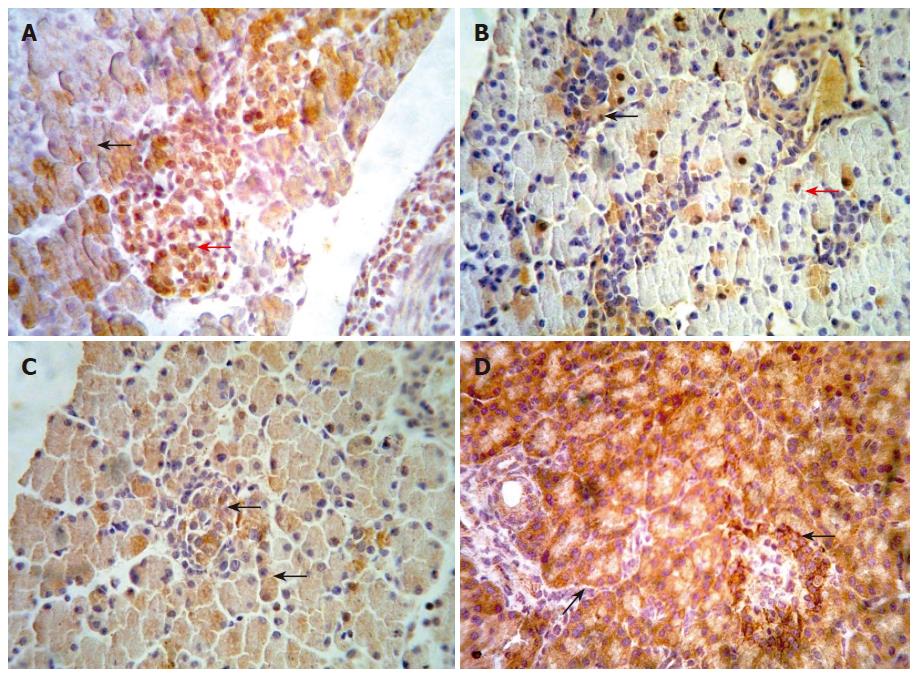 At present, morbidity rate of diabetes has an ascending tendency in the world while high morbidity and mortality of pancreatic carcinoma is becoming one formidable topic for surgeon[5]. In order to treat these diseases effectively, fully understanding of the development and differentiation of embryonic pancreas, as well as the underlying molecular mechanism of pancreatic diseases is needed.

In the study, we investigated simultaneously cyclin D1 gene which is one of target genes of Wnt/catenin signaling pathway[14]. The changed tendency of cyclin D1 on the transcription level of mRNA and protein expression is almost in step with β-catenin in pancreas of E14.5-E18.5. It is known that cyclin D1 is a key regulator of the G1 phase of cell cycle[15]. Expressing of cyclin D1 protein in the cytoplasm and/or nuclei indicated that pancreatic cells should be in the condition of proliferation and differentiation. We therefore had come to another conclusion that cyclin D1 exactly is one of activated target genes of Wnt signaling pathway in development of embryonic pancreas.

It has been reported that APC is a negative regulatory factor as well as Axin in Wnt signaling pathway[16]. Experiments in Drosophila ultimately revealed that genetic ablation of APC indeed resulted in upregulation of β-catenin signaling[17]. In pancreas of E14.5-17.5, we could not observe the amplification band of mRNA and protein expressing of APC gene. Only in pancreas of E18.5, could we first find positive stain of APC protein as well as transcription of mRNA of APC gene. In adult rat the positive cells of APC protein spread throughout external secretion portion and internal secretion portion of pancreas. We have known that the proliferation level of pancreas is very low in adult rat particularly in diabetes[18]. This is coincident with the negative role of APC in Wnt/β-catenin signaling pathway.

In this study the cell with positive stain of β-catenin couldn’t be found in adult rat pancreas although the transcription of β-catenin gene could be detected by RT-PCR. The reasons are discussed below. First the destruction complex including GSK3、Axin and APC can degradate the free β-catenin in the cytoplasm in time in adult rat pancreas[19]. Secondly the quantity of β-catenin protein which are attached to membrane with E-cadherin may be too little to be detected by immunohistochemical techniques used in present experiments[20].

Although this signaling pathway was active, we had known little about the role of Wnt /β-catenin signaling pathway in development of embryonic pancreas indeed. Which are the upperstream signals[21-22] Which target genes beside of cyclin D1 are activated How to crosstalk with other signaling pathway[23] All these topics need us to investigate further.