AIM: To identify patients with a high-risk of having a synchronous cancer among gastric cancer patients.

Second primary cancer influences the prognosis of gastric cancer patients, and because primary or secondary prevention is the best way to cure cancer, some investigators have focused on the characteristics of second primary cancers in gastric cancer patients[7-10]. However, few studies have been performed in this regard, and most of these studies are limited to metachronous cancers or the treatment-related second primary malignancies of gastric cancer patients[11,12]. The detection of synchronous cancers gives us the opportunity to treat both cancers simultaneously using less invasive techniques and thus to beneficially influence the prognosis and quality of life of these patients.

The aim of this study was to find a means of identifying gastric cancer patients at risk of having a synchronous cancer.

All statistical analyses were performed using the statistical software ‘Statistical Package for Social Sciences’ (SPSS) version 10.0 for Windows (SPSS, Inc, Chicago, IL). Inter-group (for patients with and without synchronous cancer) comparisons of clinicopathological variables were made using the Student t-test for continuous variables and using the two-tailed Chi-square test for discrete variables.

Risk factors influencing synchronous cancers were determined by logistic regression analysis. Hazard ratio as determined by multivariate analysis, was defined as the ratio of the probability that an event (with synchronous cancer or not) would occur to the probability that it would not occur. The predicting powers of covariates were expressed by calculating hazard ratios with a 95% confidence interval. The accepted level of significance was P < 0.05.

RESULTS
Clinicopathological characteristics of the patients

Among the 3291 gastric cancer patients, 111 patients 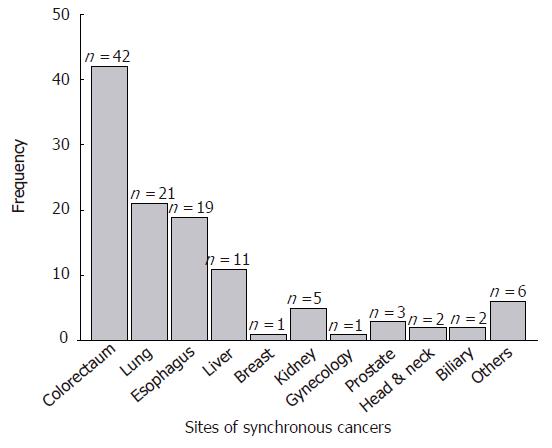 Regardless of the fact that they had potentially curable gastric cancer, 38 (35.4%) patients did not undergo an operation, and the presence of an advanced synchronous cancer was a principal reason. The major factor influencing treatment plans was cancer stage. Therefore, urgent efforts should be made to identify those at high-risk of having a synchronous cancer.

Despite the fact that this study was conducted based on an analysis of a prospective database, not all patient information was recorded, because almost one third of the patients were not treated at our institution. Therefore, the preoperative stage was not always the same as the pathological stage. However, considering that the accuracy of preoperative staging for EGC or AGC is > 80%, we believe that our results would have been comparatively unchanged had we adopted pathological stage[21].

Colonoscopy is not routinely performed at our center in gastric cancer patients scheduled to undergo an operation or endoscopic mucosal resection. Because the indications for endoscopic mucosal resection are a differentiated cancer of < 2cm in diameter, those patients that undergo EMR present a group at high-risk of having a synchronous cancer. Moreover, it is likely that the incidence of synchronous colon cancer may have been higher if we had performed routine colonoscopy in these patients. We now plan to perform a routine colonoscopic examination on those determined by this study to be at high-risk.