AIM: To immunohistochemically examine micrometastasis and VEGF-C expression in hilar bile duct carcinoma (HBDC) and to evaluate the clinical significance of the results.

METHODS: A total of 361 regional lymph nodes from 25 patients with node-negative HBDC were immunostained with an antibody against cytokeratins 8 and 18 (CAM 5.2), and immunohistochemical staining of VEGF-C was performed in 34 primary resected tumors.

CONCLUSIONS: It is suggested that immunohistochemically detected lymph node micrometastasis has an impact on the outcome of HBDC. VEGF-C expression is highly correlated with lymph node metastasis in HBDC and might therefore be a useful predictor.

Hilar bile duct carcinomas (HBDC) are one of the most difficult to cure malignant gastroenterological tumors[1-4] and curative resection is essential for long-term survival. Because hilar bile duct tumors are in close proximity to vital structures in the hepatic hilum, such as the hepatic artery and portal vein, and since they tend to spread to the proximal biliary tract and perineural and perilymphatic spaces, hepatectomy with thorough systematic extended lymph node dissection is frequently required for curative resection. However, even with margin-negative resection, the prognosis after curative resection remains poor. One possible reason for the poor outcome is existence of occult lymph node metastasis that cannot be detected by conventional hematoxylin and eosin (HE) staining at the time of surgical resection. Immunohistochemical and molecular techniques have, however, made it possible to identify lymph node micrometastasis missed by traditional methods. Recently, immunohistochemical and/or genetic detection of lymph node micrometastases of various tumors, including carcinomas of the breast[5,6], lung[7,8], esophagus[9,10], stomach[11-14], colorectum[15,16] and gallbladder[17-19], has been reported. However, we were able to find only one report documenting this in HBDC[20].

Vascular endothelial growth factor C (VEGF-C) is a member of the highly glycosylated vascular endothelial growth factor (VEGF) family that regulates vasculogenesis, hematopoiesis, angiogenesis, lymphangiogenesis and vascular permeability, and has been implicated in many physiological and pathological processes[21,22]. Overexpression of VEGF-C cDNA in the skin of transgenic mice has been shown to selectively induce lymphatic endothelial cell proliferation and hyperplasia of the lymphatic vasculature[23]. It was also recently reported that a VEGF-C-transfected tumor cell line implanted into the stomach of nude mice gave rise to numerous lymph node metastases[24]. The most prominent VEGF-C expression has been detected in the human heart, placenta, muscle, ovary, and small intestine[25], and a positive correlation between expression and various clinicopathological factors, especially lymph node metastasis, has been reported in a number of tumors, including carcinomas of the thyroid[26], breast[27], lung[28], esophagus[29], stomach[30,31], colorectum[32], prostate[33] and pancreas[34]. However, no investigations have been conducted with regard to VEGF-C expression in HBDC and possible clinicopathological associations. In this study, we examined lymph node micrometastasis and VEGF-C expression in patients with HBDC and evaluated the clinical significance of the results.

From January 1981 to August 2000, 61 patients with HBDC underwent surgical resection plus systematic lymph node dissection in the First Department of Surgery, Mie University School of Medicine. Of these patients, 34 underwent macroscopic and microscopic margin-negative resection. Patients consisted of 21 males and 13 females with a mean age of 64.4 ± 11.0 years (range: 37-89 years). The median follow-up period was 31.8 mo (minimum: 1.0 mon). No lymph node metastases were detected in 25 (73.5%) of the 34 patients by traditional pathologic examinations with HE staining.

A total of 361 lymph nodes dissected from 25 node-negative patients were examined immunohistochemically by staining with an antibody against cytokeratins 8 and 18, and all 34 primary tumors were immunohistochemically stained for VEGF-C. Tumor specimens and lymph nodes were collected from pathology files after obtaining informed consent from all patients in accordance with institutional guidelines.

Tissue samples were fixed in 10% formaldehyde with phosphate-buffered saline (PBS) and embedded in paraffin. Lymph node tissue was cut into six 5-µm thick sections, and primary tumor tissue was cut into a single 5-µm thick section. Briefly, the sections were deparaffinized with xylene and rehydrated through graded concentrations of ethanol. For antigen retrieval, sections were placed in 0.1mol/L citrate buffer (pH 6.0) and heated three times for 3 min each in a microwave oven (500 W). Lymph node sections were then incubated with a mouse monoclonal antibody (CAM 5.2; Becton Dickinson, San Jose, CA) specific for cytokeratins 8 and 18, and tumor sections were incubated with affinity-purified goat polyclonal antibodies (IBL, Fujioka, Japan) to VEGF-C at 1:30 dilution. Immunohistochemical detection of CAM 5.2 and VEGF-C was performed by a standard avidin-biotin method on an automated Ventana ES immunostainer (Ventana Medical Systems, Tucson, AZ) according to the manufacturer’s instructions[37].

We examined 6 sections per lymph node and diagnosed micrometastasis when tumor cells were detected immunohistochemically, after being missed by routine histologic examinations with HE staining. VEGF-C immunoreactivity was mainly present in the cytoplasm of cancer cells and/or in the connective tissue around cancer cells. For evaluation of VEGF-C immunostaining, we examined at least 200 cancer cells per case. Cases in which at least 10% of the cancer cells were immunoreactive were defined as VEGF-C positive. All immunohistochemical evaluations were performed by an experienced histopathologist unaware of the clinicopathological features of the patients. 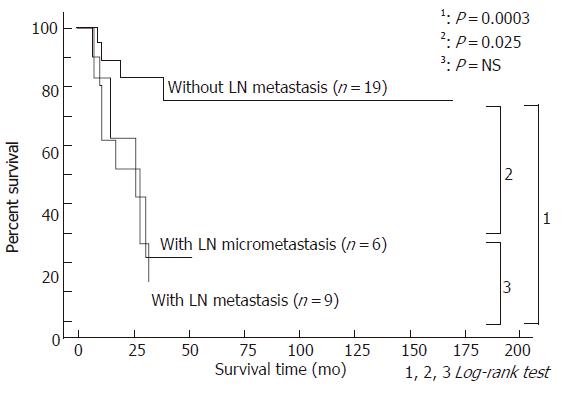 Figure 2 Survival curves after resection for hilar bile duct carcinoma according to the presence of lymph node metastasis, including micrometastasis. 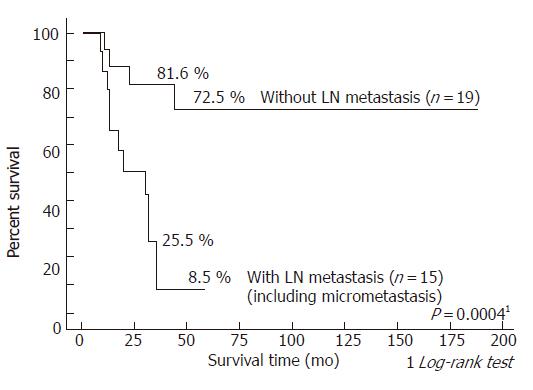 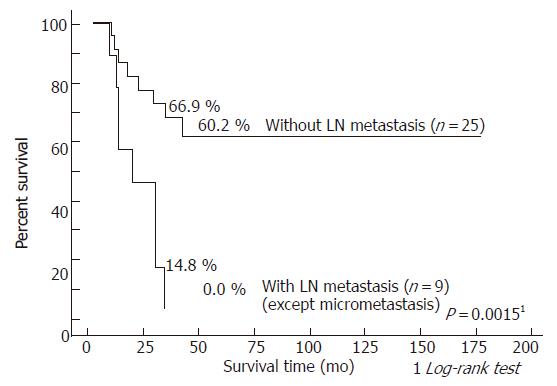 VEGF-C expression was observed in 17 (50.0%) of the 34 primary tumors (Figure 5). The correlations between VEGF-C expression and clinicopathological factors are shown in Table 1. Microscopic venous invasion (P = 0.035) and lymph node metastasis (P = 0.042) were significantly correlated with VEGF-C expression.

VEGF-C is a specific ligand of VEGFR-3 and VEGFR-2, and has been shown to stimulate lymphangiogenesis and angiogenesis both in vitro and in vivo. Nakashima et al[45] investigated VEGF-C expression in 52 patients with gallbladder carcinoma and found that expression was significantly stronger (P < 0.001) in patients with lymph node metastasis than those without, and that the VEGF-C-positive group showed poorer outcomes than the negative group (P < 0.001).