Fulminant hepatic failure (FHF) is defined as a liver failure with encephalopathy, developing within eight weeks from the onset symptoms in the absence of pre-existing liver disease. The most common causes of FHF are viral or drug-induced hepatitis[1]. Small-cell lung cancer (SCLC) manifesting as acute hepatic failure resulting from diffuse parenchymal infiltration by metastatic tumor is rare. The prognosis is poor, with death usually occurring within several days[1]. We describe herein a patient with SCLC and FHF that improved after chemotherapy.

A 69-year-old male was admitted to our hospital because of a 2-wk history of nausea, anorexia, fatigue, jaundice, and pain in the right upper quadrant of the abdomen. He had no history of blood transfusion, hepatitis, intravenous drug use, or alcohol abuse, though had an average of 2 packs of cigarettes a day for 50 years. Physical examination revealed hepatomegaly and bilateral pretibial edema, but he was alert. Laboratory analyses revealed 1760 U/L alkaline phosphatase, 6695 U/L lactate dehydrogenase (LDH), 470 U/L aspartate aminotransferase (AST), 7.6 mg/dL bilirubin, 85 μg/dL ammonia, prothrombin time level of 63%, and 680 ng/mL neuron specific enolase (NSE) levels. A computed tomography (CT) of the abdomen showed multiple lesions and massive infiltration throughout the liver parenchyma (Figure 1A). A chest roentgenogram and CT scan showed a right hilar mass with pleural effusion (Figure 1B). Bronchoscopy with transbronchial lung biopsy revealed small-cell carcinoma of the lung (Figure 2). On the seventh day of hospitalization, chemotherapy was initiated with carboplatin (area under the curve 4) administered on d 1, and 80 mg/m2 etoposide from d 1 to 3, with cycles repeated every 3 wk. 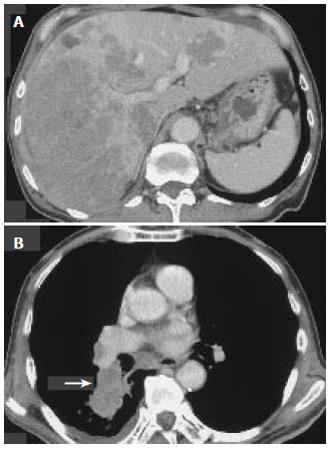 Figure 1 Computed tomography of the patient. A: CT of the abdomen showing multiple lesions and massively infiltrative process throughout the liver parenchyma; B: CT of the chest showing a right hilar mass (arrow) with pleural effusion.

After two cycles of chemotherapy, the patient felt symptomatically better, and a CT of the chest and abdomen revealed a marked reduction of tumor size in the primary site and liver metastasis. The laboratory analyses revealed an improvement of hepatic failure. During the 2 months of initial chemotherapy, the patient’s condition deteriorated due to progression of hepatic failure (total bilirubin level, 19.5 mg/dL; LDH, 4 699 U/L; AST, 424 U/L; ammonia, 145 μg/dL; glucose, 129 mg/dL; prothrombin time, 38%), the development of ascites, and stage II encephalopathy. A CT scan of the brain revealed no evidence of cerebral metastatic disease. However, the radiological examination revealed the recurrence of SCLC. Therefore, the patient was treated with 35 mg/m2 amrubicin from d 1 to 3, with cycles repeated every 3 wk. Though grade 4 neutropenia (NCI-CTC ver 2.0) occurred after two cycles of chemotherapy, the patient had a marked improvement of encephalopathy (stage 0), general condition, and laboratory values (LDH, 180 U/L; AST, 45 U/L; ammonia, 42 μg/dL; prothrombin time 89%; and NSE, 9.6 ng/mL). Follow-up CT imaging documented a good partial response of the liver metastases, and a complete disappearance of the right hilar mass. Then, he was discharged from our hospital. However, the patient died of bacterial pneumonia at six months after presentation. A post-mortem was not done because of refusal of his family.

FHF secondary to metastatic SCLC is rare and results in death within days to weeks[1-3]. In literature, there are 21 previously reported cases of acute hepatic failure resulting from metastatic SCLC (Table 1). Two of the 21 reported patients presented an apparent dramatic response of severe tumor-related lactic acidosis to the initiation of chemotherapy (cyclophosphamide, doxorubicin, and vincristine)[3,4]. In most of the reported patients, however, the administration of appropriate chemotherapy was not performed, and no diagnosis was made before death. The rapid deterioration of the patient’s condition may account for the difficulty of an accurate diagnosis[1]. The seven patients of acute hepatic failure with encephalopathy, even if metastatic SCLC was diagnosed before death, all died without the administration of chemotherapy because of a rapidly deteriorating course[1,5-8].

Amrubicin (SM-5887) is a totally synthetic anth-racycline and a potent topoisomerase II inhibitor[9], and is one of the most active agents for SCLC. In a phase II study of amrubicin using a schedule of 45 mg/m2 on d 1-3 every 3 wk in 33 previously untreated extensive-stage SCLC patients, an overall response rate of 76% and median survival of 11.7 mo have been observed[10]. In this case, amrubicin, as second-line chemotherapy, was effective for the improvement of encephalopathy and liver metastases. However, the efficacy of amrubicin as a salvage chemotherapy remains unknown.

Extremely high serum LDH level represents diffuse replacement of the liver parenchyma and is associated with a higher risk of developing FHF[2]. Several reports have shown correlation between serum LDH levels with survival in SCLC patients with liver metastases, and suggested an accurate relationship between elevated LDH levels and hepatic dysfunction[1,2,7]. These findings are in agreement with the LDH levels in our patient, who was observed with elevated LDH serum levels prior to chemotherapy, then regressing to normal LDH levels after the improvement of liver metastasis.

In the reports of malignant diseases manifesting as acute hepatic failure complicated by encephalopathy, a non-Hodgkin’s lymphoma patient responded to chemotherapy and survived FHF[11]. Once FHF develops secondary to diffuse liver metastases in cancer patients, prognosis is dismal and there is no effective treatment with the exception of chemotherapy. Our case, with supporting evidence from non-Hodgkin’s Lymphoma[11] and 2 cases of lactic acidosis[3,4], suggests that early diagnosis and a prompt administration of appropriate chemotherapy may result in the improvement of acute hepatic failure, and thereby improving survival.

Hence, we suggest that in addition to the efficacy of amrubicin as second-line chemotherapy, early diagnosis and prompt initiation of chemotherapy may result in the improvement of FHF, and thereby improving survival.