Autoimmune pancreatitis, a recently recognized type of chronic pancreatitis, is not rare in Japan, but reports of it elsewhere are relatively uncommon. We report the first preoperatively diagnosed case of autoimmune pancreatitis in Hungary, which responded well to steroid treatment and provided radiographic and functional evidence of this improvement. A 62-year-old female presented with a 4-month history of recurrent epigastric pain and a 5-kg weight loss. The oral glucose tolerance test (OGTT) indicated diabetes mellitus and the result of the fecal elastase test was abnormal. Ultrasonography (US) and the CT scan demonstrated a diffusely enlarged pancreas, and endoscopic retrograde cholangiopancreatography (ERCP) an irregular main pancreatic duct with long strictures in the head and tail. Autoimmune pancreatitis was diagnosed. The patient was started on 32 mg prednisolone daily. After 4 wk, the OGTT and faecal elastase test results had normalized. The repeated US and CT scan revealed a marked improvement of the diffuse pancreatic swelling, while on repeated ERCP, the main pancreatic duct narrowing was seen to be ameliorated. It is important to be aware of this disease and its diagnosis, because AIP can clinically resemble pancreatobiliary malignancies, or chronic or acute pancreatitis. However, in contrast with chronic pancreatitis, its symptoms and morphologic and laboratory alterations are completely reversed by oral steroid therapy.

Autoimmune pancreatitis (AIP) is an increasingly recognized type of chronic pancreatitis that is clearly distinct from alcoholic chronic pancreatitis. It is characterized by its special morphology, immunologic features, pathology and steroid responsiveness[1-5]. Since Sarles et al[6] first described a case of pancreatitis with hypergammaglobulinaemia more than 40 years ago, several hundred cases have been reported, particularly in the Japanese literature[1-4,7-9]. Its prevalence in other populations is unclear.

We describe here the first preoperatively diagnosed case of AIP in Hungary and discuss the clinical features, diagnosis and treatment of this uncommon disease.

A 62-year-old teetotal woman with a 4-month history of recurrent epigastric pain and a 5-kg weight loss was referred to our hospital. There was no personal or family history of pancreatitis. On physical examination, an apple-sized, painless mass was palpated in the epigastrium. With the exception of elevated fasting glucose level, the results of detailed laboratory examinations, including Ca 19-9 antigen, were normal. The oral glucose tolerance test (OGTT) revealed diabetes mellitus. The fecal elastase test result was abnormal (120 µg/g faeces). The antinuclear antibody and rheumatoid factor tests were positive. Abdominal ultrasonography (US) revealed a diffusely enlarged pancreas, and the abdominal CT scan an enlarged, sausage-shaped pancreas (Figures 1A and 1B). On endoscopic retrograde cholangiopancreatography (ERCP), an irregular main pancreatic duct with long strictures in the head and tail was observed (Figure 2A). AIP was diagnosed. The patient was started on 32 mg prednisolone daily and enzyme replacement therapy. After 4 weeks she had become totally asymptomatic. The fasting glucose level, the results of OGTT and the fecal elastase test had normalized, and the repeated US and CT scan demonstrated a marked improvement of the diffuse pancreatic swelling (Figures 1C and 1D). On repeated ERCP, the main pancreatic duct narrowing was seen to be ameliorated (Figure 2B). We advised tapering and cessation of the steroid. 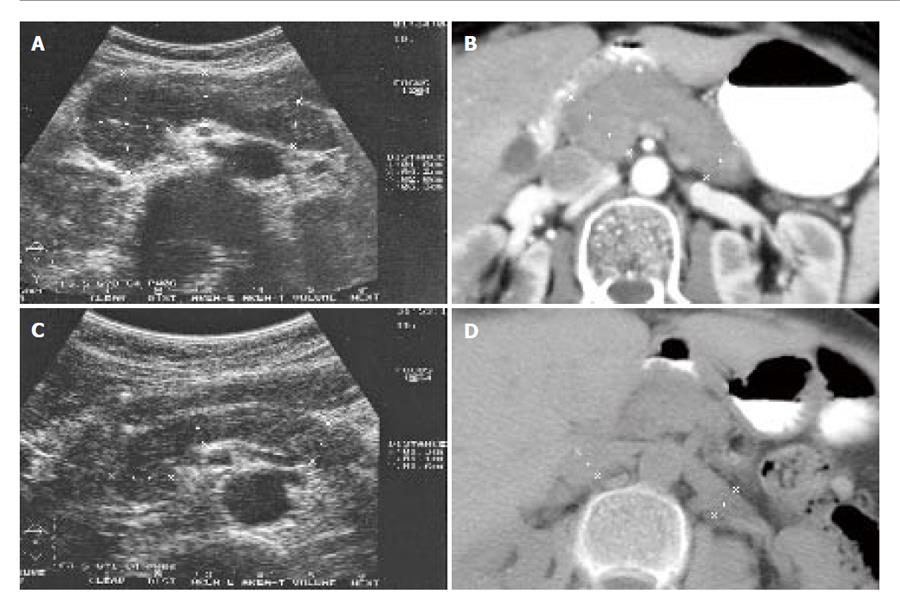 Figure 1 Abdominal ultrasonography (A) and CT (B) revealed a diffusely enlarged pancreas with sharp margins similar to sausage appearance. Four weeks after the steroid therapy the size of the pancreas became normal (C and D). 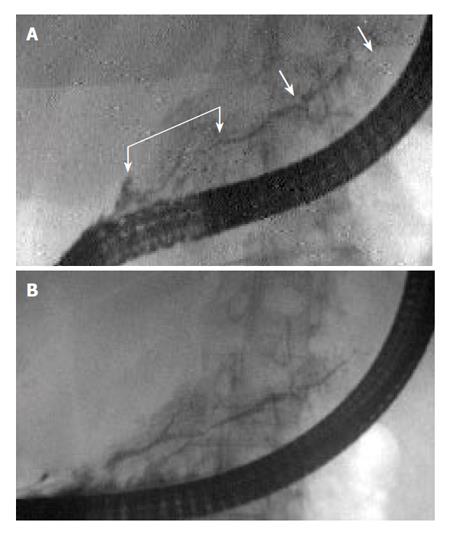 Figure 2 ERCP demonstrated multiple strictures of the Wirsung duct without posttenotic dilation (A). Four weeks after the steroid therapy the main pancreatic duct narrowing was seen to be ameliorated (B).
DISCUSSION

To date, several hundred cases of AIP have been reported, particularly in the Japanese literature[1-5,7-9]. This has led to the proposal of AIP as a distinct clinical entity, and AIP is currently categorized as an established etiology of chronic pancreatitis[10]. The disease has appeared outside Japan only very rarely; few cases have been published in Europe[11-16], most of which were diagnosed postoperatively. It is unlikely that AIP is a disease endemic to Japan. It appears likely that physicians in other countries may overlook this entity due to the lack of their familiarity with it, and regard such patients as cases of ordinary or idiopathic chronic pancreatitis, or pancreatobiliary malignancy.

The diagnosis of AIP is challenging as its symptoms are few and non-specific. Its clinical characteristics are jaundice, abdominal pain, weight loss and diabetes mellitus. Most of the patients are older than 50 years. In consequence of the symptoms and the age of these patients, they are often initially thought to have pancreatic carcinoma, and many of them actually undergo laparotomy[5,17]. AIP may be associated with a number of other autoimmune diseases, such as Sjögren’s syndrome, primary sclerosing cholangitis, inflammatory bowel disease, systemic lupus erythematosus or retroperitoneal fibrosis. Laboratory findings suggestive of AIP include hypergammaglobulinaemia, increased levels of total IgG or IgG4, and the presence of autoantibodies such as antinuclear antibody, anti-lactoferrin antibody and anti-CA-II antibody[1-5].

Characteristic radiological features are an enlarged, sausage-shaped pancreas on abdominal US and CT, and narrowing of the main pancreatic duct on ERCP[18]. A common microscopic picture in AIP is periductal lymphoplasmacytic infiltration with pronounced acinar atrophy, marked fibrosis and obliterated phlebitis[19].

The diagnosis of AIP should be based on a combination of the clinical and laboratory findings, pancreatic imaging, and the exclusion of other conditions[4].

The principal treatment is corticosteroid at a recommended starting dose of 30 to 40 mg of prednisolone/day until the symptoms improve; this is followed by a taper of 5 to 10 mg. Steroid treatment usually leads to a rapid improvement in the clinical symptoms and the laboratory and morphological findings. Steroid therapy has also been reported to be beneficial as concerns the pancreatic fibrosis, exocrine and endocrine functions and associated diabetes mellitus[7-9,20]. It has been proposed that the response to steroid therapy should be included in the diagnostic criteria[21]. Steroid therapy may be tried empirically, when AIP is suspected on the basis of the typical pancreatic imaging results alone, if laboratory data and histologic findings are not available or do not fully meet the diagnostic criteria[5,7] The response to steroid therapy can facilitate confirmation of the diagnosis of AIP.

In our patient, the diagnosis of AIP was indicated by the morphological alterations of the pancreas in US and CT, the narrowing of the main pancreatic duct on ERCP, and the autoimmune abnormalities. Histological findings were not available. The clinical symptoms and the abnormalities observed on US, CT and ERCP responded rapidly to steroid therapy, confirming the diagnosis of AIP.

It is very important to be aware of this disease, because AIP may be mistaken for ordinary chronic pancreatitis or pancreatic cancer, leading to pancreatic resection instead of treatment with steroid. As awareness of this disease grows, the reported prevalence of AIP outside Japan may be expected to increase and the possibility of unnecessary surgery may be reduced.