A 58-year-old Japanese man had tarry stool and severe anemia. Neither upper nor lower gastrointestinal (GI) endoscopy showed any localized lesions. Thus, the source of his GI bleeding was suspected to be in the small intestine, and he underwent peroral double-balloon enteroscopy (DBE) using EN-450T5 (Fujinon-Toshiba ES System Co., Tokyo, Japan). There were no lesions considered to be the source of GI bleeding. After the procedure, the patient began to experience abdominal pain. Laboratory tests revealed hyperamylasemia and abdominal computed tomography revealed an inflammation of the pancreas and the peripancreas. He was thus diagnosed to have acute pancreatitis. Conservative treatments resulted in both clinical and laboratory amelioration. He had no history of alcohol ingestion, gallstone disease or pancreatitis. Magnetic resonance cholangiopancreatography demonstrated no structural alterations and no stones in the pancreatobiliary ductal system. As his abdominal pain started after the procedure, his acute pancreatitis was thus thought to have been related to the peroral DBE. This is the first reported case of acute pancreatitis probably associated with peroral DBE.

The small intestine is located quite far from both the mouth and the anus, and thus it has been difficult to be examined by endoscopy until recently. However, capsule endoscopy and double-balloon enteroscopy (DBE), new methods of enteroscopy, have been introduced in recent years which have now made the observation of the entire small intestine possible.

DBE is a novel technique which was developed by Yamamoto et al, in Japan[1-3], and is spreading also in other countries. Both a 200-cm enteroscope and a 145-cm overtube which have a soft latex balloon at their tips are included in the system. Both balloons can be inflated or deflated by a balloon-pump controller which thus allows for a shortening of the proximal intestine, thus allowing the enteroscope to be inserted into the deep small intestine. Currently, two different diameter enteroscopes, EN-450P5/20 (Fujinon-Toshiba ES System Co., Tokyo, Japan) with an outer diameter of 8.5 mm (an overtube with an outer diameter of 12.2 mm) and EN-450T5 with an outer diameter of 9.4 mm (an overtube with an outer diameter of 13.2 mm) are available. With a larger accessory channel, EN-450T5 allows the performance of a variety of enteroscopic treatments including argon plasma coagulation/ablation, coagulation/biopsy (hot biopsy) and balloon dilatation. The indications of DBE are for the diagnosis and the treatment of small intestinal diseases. DBE is quite useful for the diagnosis of the origin of obscure gastrointestinal (GI) bleeding in the small intestine and for the endoscopic evaluation and histopathological diagnosis from the biopsy samples of small intestinal lesions such as ulcers, tumors and strictures. It is also useful for the treatment of small intestinal diseases, for example, the management of active GI bleeding and polypectomy of the small intestinal polyps. The technique of DBE is considered to be safe as only few complications related to sedation and original diseases have been reported previously[4,5].

A 58-year-old Japanese man had tarry stool and syncope and was hospitalized by ambulance during the previous month. Since laboratory tests revealed severe anemia (hemoglobin level: 77 g/L, normal 140-180 g/L), he received red blood cell transfusion. Neither upper nor lower gastrointestinal GI endoscopy showed any localized lesions. Barium meal radiography of the small intestine and computed tomography (CT) also failed to show any lesions. As a result, the source of his GI bleeding was suspected to be a small lesion in the small intestine such as angiodysplasia, small ulcer or erosion, and he was thus referred to our hospital. Thirty days had already passed from the day when he had tarry stool and his hemoglobin level recovered up to 114 g/L. On the day of his admission, written informed consent was obtained from him and he underwent peroral DBE using EN-450T5. The total time of the procedure was 100 min. At the most distal site, the small intestinal mucosa was marked with a tattoo by a submucosal injection of sterilized ink through an injection catheter. There was a small submucosal tumor, which had a yellowish surface with white specks, located in the upper jejunum (Figure 1), which was considered to be a lymphangioma because of its typical image. But it was not considered to be the source of GI bleeding because there was no ulceration or erosion on its surface. After finishing the procedure, the patient began to experience abdominal pain. An abdominal examination revealed moderate epigastric tenderness and silent bowel sounds. His laboratory findings were as follows: white blood cells, 13 100/µL (normal 3 500-9 000 /µL); C-reactive protein, 2.37 mg/dL (normal < 0.10 mg/dL); serum amylase, 702 U/L (normal 50-159 U/L). Abdominal CT revealed an inflammation of the pancreas and the peripancreas (Figure 2). He was thus diagnosed to have acute pancreatitis. The patient was treated by total parenteral nutrition with intravenous rich fluids and gabexate. These treatments resulted in both clinical and laboratory amelioration and he started oral intake on day 16. Since then, his condition was good and he underwent peranal DBE on day 26. No lesions were observed on the anal side of the small intestine although the mark with a tattoo was not detected. It probably disappeared since it has been 26 d from the day of peroral DBE. Hence, his GI bleeding source remained unknown. He was discharged on day 30. His hospitalization was extended for more than 10 d because of pancreatitis after peroral DBE. The grade of his pancreatitis was diagnosed as severe according to the criteria of Cotton et al [6]. 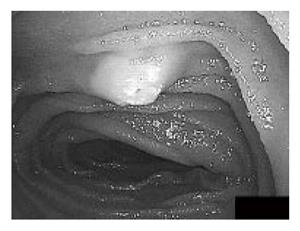 Figure 1 Peroral double-balloon enteroscopy revealed a small yellowish submucosal tumor with white specks on the surface in the upper jejunum. 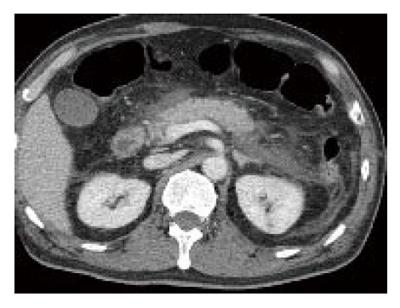 Figure 2 Abdominal CT showed inflammation and swelling of the pancreas, and a blurring of the fat planes in both the peripancreas and the left anterior pararenal space.

He had no history of alcohol ingestion, gallstone disease or pancreatitis. Magnetic resonance cholangiopancreatography on day 18 demonstrated no structural alterations and no stones in the pancreatobiliary ductal system. As his abdominal pain started after the procedure, his acute pancreatitis was thus thought to have been related to the peroral DBE.

Newly developed methods of enteroscopy, capsule endoscopy and DBE, are quite useful for the detection of the origin of GI bleeding in the small intestine. Capsule endoscopy causes minimum discomfort to patients because the patients are free after loading a recorder and taking a capsule orally. But in Japan, experience with capsule endoscopy is limited as it has not yet been approved for the clinical use at the present time and thus it can be used in only limited facilities as clinical studies. DBE is currently available in Japan. We therefore performed DBE in this case but we could not find a lesion which caused GI bleeding. We might have a greater chance to find a responsible lesion if we could perform DBE when the patient had a active bleeding. We chose EN-450T5 as we considered the possibility of the treatment of a lesion with hemorrhage by argon plasma coagulation and hemostatic clipping. The patient unexpectedly developed acute pancreatitis after the DBE procedure.

Regarding the safety of DBE, May et al [4] reported that the only complications observed were related to sedation in 248 enteroscpies (including 153 peroral enteroscopies). Yamamoto et al[5] demonstrated that two complications, mainly associated with the original diseases, occurred among 178 procedures (including 89 peroral enteroscopies). One was multiple perforations occurred in a patient with intestinal lymphoma who received chemotherapy and the other was in a patient who was discovered to have Crohn’s disease and had postoperative fever and abdominal pain. In the above two studies, EN-450P5/20 was used and no instances of acute pancreatitis were reported. Up to now, we have performed peroral DBE using EN-450P5/20 on 13 cases (one case reached to the ascending colon), and no previous cases demonstrated pancreatitis. This was the first case in which we performed peroral DBE using EN-450T5. The thicker diameter of EN-450T5 might therefore be associated with the development of pancreatitis.

A few cases developing pancreatitis have been reported as a complication of upper or lower GI endoscopy without ampullary cannulation[7-9] although GI endoscopy is not known to be associated with an increased risk for pancreatitis. The underlying mechanism of pancreatitis in these cases is unclear. In case of upper GI endoscopy, it was possible that trauma to the papilla during duodenal intubation might have led to edema of the papilla and subsequent pancreatitis. In case of colonoscopy, it was possible that over insufflation of the colon might have caused pressure of the pancreas or compression of the colonoscope against the spine might have caused a direct trauma to the pancreas. The mechanisms of developing pancreatitis associated with peroral DBE were thought to be as follows: the one may be a pancreatic duct obstruction due to the direct oppression of the papilla by an overtube and the other may be an increase in the intralumenal pressure of the duodenum by a thick overtube and shortening technique.

Here we reported a case of acute pancreatitis that was thought to be associated with DBE. This case indicates that, when peroral DBE is performed, especially with EN-450T5, we have to keep in mind the possibility of developing pancreatitis. And if a patient complained a strong abdominal pain during and after the procedure, we have to rule out acute pancreatitis by examining serum amylase level and abdominal CT as soon as possible.