AIM: To examine the effects of cyclin D1 antisense oligodexoyneucleotides (ASODN) on growth and chemosensitivity of gastric carcinoma cell lines SGC7901 and its mechanism.

METHODS: Phosphorothioate modified cyclin D1 ASODN was encapsulated by LipofectAMINE2000 (LF2000) and transfected into cells, the dose-effect curves and growth curves were observed. 5-FU, MTX, CDDP of different concentrations were given after transfecting cells with cyclin D1 ASODN for 24 h，the dose-effect responses were observed and IC50s were calculated. The mRNA expression of cyclin D1, thymidylate synthase (TS), thymidine phosphorylase (TP) and dihydrofolate reductase (DHFR) was detected by reverse transcription-PCR (RT-PCR) at 24 h and 48 h after transfection.

CONCLUSIONS: Cyclin D1 ASODN can decrease mRNA expression of cyclin D1，inhibit growth and enhance the chemosensitivity by changing the expression of enzymes related to metabolism of chemotherapeutic agents in SGC7901 gastric carcinoma cells.

Cyclin D1 involves in the regulation of G1 phrase in cell cycle, with three subtypes (D1, D2, D3), cyclin D1 located in 11q13, cDNA is 4.3 Kb, is identified as the proto-oncogene and overexpressed in breast, esophageal, and hepatic carcinoma. Cyclin D1 is an important cell cycle regulatory protein that is expressed in the early G1 phase. This protein, in association with the cyclin-dependent kinases CDK4 and CDK6, mediates the phosphorylation of pRb [1]. In this study, we transfected gastric carcinoma cells with cyclin D1 antisense oliogodeoxyneucletides，to observe the effects of it on growth and chemosensitivity to 5-fluorouracil (5-FU)，methotrexate (MTX) and cisplatin (CDDP), furthermore, we examined the expression of enzymes related to metabolism of chemotherapeutic agents, including TS, TP and DHFR, to find out the underlying mechanism.

Cells were plated in 96-well plates, SODN and ASODN were mixed with LF2000 respectively, diluted to a increasing concentration (from 0.05 to 0.5 µmol/L) and added to plates, after transfection for 24 h, the media were replaced with DMEM contain serum and cells were continue cultured for 72 h. The viability was determined by MTT assay and survival rates were calculated. The optimal concentration, able to inhibit cell growth of at least 50% vs control, was selected for further experiments.

Cells were plated in 12-well plates, treated with LF2000-SODN or ASODN complexes at concentration of 0.2 µmol/L, after transfection for 24 h, replaced with media with serum and cultured for 6 d, cell numbers were counted everyday and the growth curves were drawn.

Cells were plated in 6-well plates, transfected and cultured as described, the cells were harvested at 24h and 48h after transfection. Total RNA was isolated by TRIZOL Reagent (GIBCO). Reverse transcription was carried out on 1 µg of total RNA, 20 µL reaction system contained oligo(dT) 0.1µg, 2 mmol/L dNTPs 4 µL, Rnasin 0.1µg, MMLV 200U, incubated at 42 °C for 1h and enzymes were inactivated at 95 °C for 5min. 2.5µL RT products were used for PCR reaction, the dNTPs, sense and antisense primers (100 pmol), Taq DNA polymerase were added into reaction system of 40 µL. G3PDH was used as the control, primers and PCR condition as follow(Table 1)

RT-PCR products (cyclin D1:514 bp; TS：208 bp; TP:353 bp; DHFR:231 bp; GAPDH: 309 bp) were analyzed by 2% agarose gel electrophroesis and visualized by EB staining, densitometric scanning of the bands was carried on and relative amount of each gene mRNA expression was estimated by normalized to the G3PDH mRNA detected in the same sample.

Results were expressed as mean±SD and the Student’s t test was used for statistical analysis (two sides). P < 0.05 was taken as level of significance.

Dose-dependent inhibitory effects were caused by cyclin D1 ASODN in SGC7901 cells，as shown in Figure 1. At concentration of 0.2 µmol/L, the inhibitory rate was 54.7% and 0.2 µmol/L was taken as optimal concentration for further experiments. Transfection with 0.2 µmol/L cyclin D1 ASODN significantly inhibited the growth of cells. IC50 in ASODN group was lower than that in the control from the third day as shown by growth curves, and there was no difference between SODN group and the control (Figure 2). 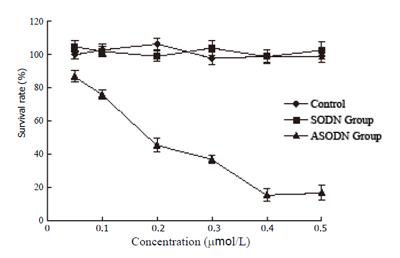 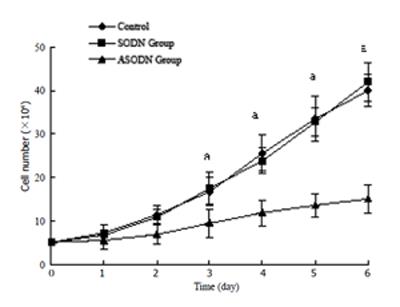 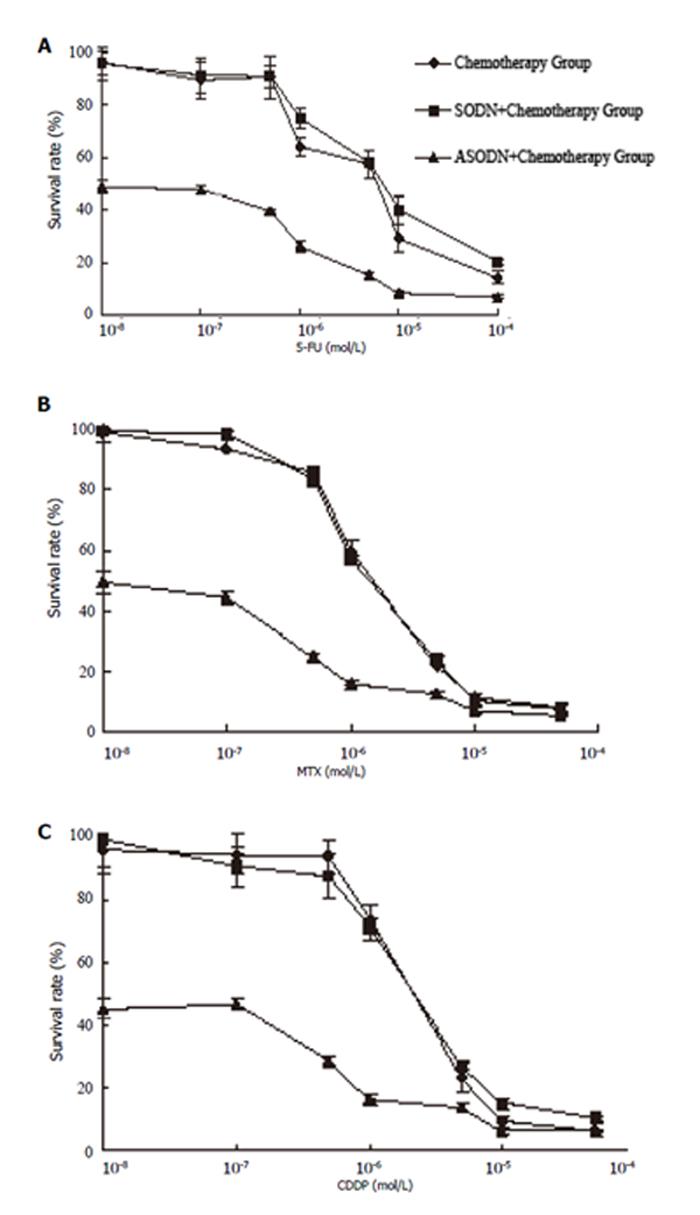 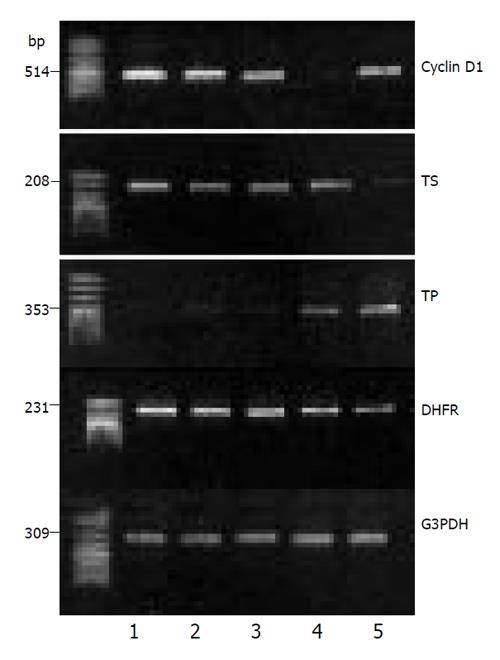 The use of antisense oligonucleotides as selective inhibitor of gene expression has become an important tool in current laboratory research and clinical trails. In our study ASODN were phosphorothioate modified and encapsulated by LipofectAMINE2000, to enhance the efficiency of transfection and prolong the time of action. We found dose-dependent inhibitory effects were caused by cyclin D1 ASODN in SGC7901 cells, the percentage of inhibition were 54.7% in cells treated with 0.2 μmol/L cyclin D1 ASODN for 24 h, and the growth of cells in ASODN group were also inhibited as shown by growth curves. Furthermore, cyclin D1 ASODN markedly reduced mRNA expression of cyclin D1. It suggested that cyclin D1 ASODN could inhibit the growth of gastric carcinoma cells through decreasing the cyclin D1 expression. The expression of cyclin D1 mRNA at 48h elevated a little, the lost of inhibitory effect of ASODN may be due to digestion by nucleases existed in cells.

5-fluoro-2’-deoxyuridine 5’-monophosphate (FdUMP), metabolic product of 5-FU, forms a tight-binding complex with TS and thereby blocks DNA synthesis process. Inhibition of TS by FdUMP is one of main mechanism underlying 5-FU action, the degree of inhibition of TS and the persistence of inhibition are essential factors for maximal in vivo growth inhibition by 5-FU[3]. TP is an enzyme that involved in pyrimidine nucleoside metabolism, and able to catalyze the conversion of 5-FU to 5-fluoro-2’-deoxyuridine (5-FdUR), which is the first step in one pathway for the metabolic activation of 5-FU. The 5-FdUR can be activated to 5-FdUMP, which blocks TS activity，and exerts antiproliferative effect.[4] The major target for MTX is the enzyme DHFR, which is important in biosynthesis of RNA and DNA. MTX has a chemical structure similar to folic acid, and can competitively inhibit DHFR activity. At 48 h after cyclin D1 ASODN transfection, the mRNA expression of TS, TP, DHFR in SGC7901 cells changed significantly in accompany with enhancement of chemosensitivity as shown in our study.

E2F may play an important role in this alteration. E2F is a cellular transcription factor, which can induce a number of genes important in the passage of cell cycle through the G1/S phase transition as well as in the initiation of DNA synthesis. When E2F binds the promoter and pRb simultaneously, the pRb-E2F complex acts as a transcriptional suppressor and completely silences the transcription of target genes. Interaction with E2F is the means through which pRb exerts its antiproliferative effect[5]. It would be expected that decreased expression of cyclin D1 by ASODN might affect pRb phosphorylation and might lead to change of level of E2F protein as a consequence of alteration in their interactions with pRb，thus change the expression of TS, TP and DHFR and enhance the chemosensitivity to 5-FU and MTX.

Warenius et al [6] firstly found that high cyclin D1 expression is related to CDDP resistance in the 16 human cell lines. Furthermore, CDDP resulted in significantly higher rates of cell killing in the antisense cyclin D1 transfected laryngeal squamous cell carcinoma cell lines CCL23 than parental cells, and ID50 decreased, which suggest the decreased expression of cyclin D1 may enhance the DNA-damaging effects of CDDP [7]. It is possible that the blockade of autocrine mitogenic signals by inhibiting cyclin D1 expression might also be a mechanism for increase in CDDP chemosensiti-vity[8]. As shown in our study, cyclin D1 ASODN can increase the cheosensitivity to CDDP in SGC7901 cells, but the exact mechanism needs further research.

Cyclin D1 ASOND could inhibit the growth of gastric carcinoma cells and change the expression of enzymes related to metabolism of chemotherapeutic agents through the influence on expression of cell cycle regulators, and enhance the chemosensitivity to 5-FU, MTX and CDDP, indicating that ASODN technology is a feasible way to enhance the efficiency of chemotherapeutic agents and provide a new strategy for combination therapy of gastric cancer.