AIM: To investigate the expression of genes involved in the gemcitabine-induced cytotoxicity in human pancreatic cancer cells.

CONCLUSION: Gemcitabine suppresses PANC-1 cell proliferation and induces apoptosis. Apoptosis is considered to be associated with the inhibition of PAP and GSK-3β, and the activation of TP53INP1 and pospho-GSK-3βser9.

Pancreatic cancer is the fifth most common cause of cancer death in Japan[1]. It is estimated that there are 20000 cases every year, which is similar to the number of deaths from this disease. The reasons for its very high mortality rate include the lack of early diagnosis, a low resectability at the time of initial diagnosis, and the rapid recurrence after resection. Surgery is rarely a curative option in pancreatic cancers because of local extension and metastasis. Chemotherapy for advanced pancreatic cancer is palliative. The use of 5-FU in combination with radiation in the locally advanced setting has been shown to enhance survival. In a randomized trial between gemcitabine and 5-FU, gemcitabine showed significantly better results in terms of the clinical benefit effect and survival[2].

Gemcitabine (2′, 2′-difluorodeoxycitidine) is a nucleoside analogue well known for its antitumor activity in several solid tumors[3]. It is one of the drugs effective for pancreatic cancers in the clinical treatment[4]. Various general mechanisms of gemcitabine have been described[5-7]. A primary mechanism of gemcitabine is the blocking of DNA synthesis by inhibiting DNA polymerase activity[8]. Gemcitabine itself is not active until it enters the cells. Its intracellular transport is mediated by facilitated diffusion[9]. Intracellularly, gemcitabine is phosphorylated to its active metabolites by deoxycitidine kinase to difluorodeoxycitidine monophosphate (dfdCMP), difluorodeoxycitidine diphosphate (dfdCDP) and difluorodeoxycitidine triphosphate (dfdCTP). All three of the metabolites interfere at different steps in the processing of DNA. The dfdCTP is incorporated into DNA and as such can obstruct DNA replication and repair. The dfdCTP can also be incorporated into RNA and can inhibit CTP-synthetase. The dfdCMP can also inhibit dCMP-deaminase. The dfdCDP is an inhibitor of ribonucleotide reductase, and its action was shown to lead to the depletion of the DNA precursor pool, dNTP. Inhibition of DNA synthesis leads to growth inhibition or cell death. In previous studies, gemcitabine has been shown to play a major role in the apoptosis of certain tumor cell lines[10-12]. There are several pathways that relate to gemcitabine-induced apoptosis. Nicole et al[13] reported that gemcitabine-mediated apoptosis is caspase-dependent in pancreatic cancers; Jones et al[14] showed that gemcitabine-induced apoptosis is achieved through the blocking of NF-kB in non-small cell lung cancer cells (NSCLC). In addition, gemcitabine-induced apoptosis is also related to signal-regulated kinase (ERK), Akt, Bcl-2 and p38 mitogen-activated protein kinase (MAPK) pathways[15-17]. Achiwa et al[18] indicated that the increase in human equilibrate nucleoside transport (hENT) expression is a determinant of gemcitabine sensitivity in NSCLC cells. However, the molecular mechanism of gemcitabine-induced apoptosis has not been fully elucidated.

TP53INP1[23] was previously called stress-induced protein (SIP)[24] or p53-dependent inducible nuclear protein (p53DINP1)[25]. TP53INP1 is strongly induced in acinar cells during acute pancreatitis in mice, and is also overexpressed in response to various stresses in vitro. TP53INP1 gene expression is wild-type p53-dependent[26]. There is a functional p53-response element within the promoter region of the TP53INP1 gene, and TP53INP1 mRNA expression is activated in cells expressing wild-type p53 in response to various stresses. One of the major functions of TP53INP1 is promoting cellular apoptosis. Glycogen synthase kinase 3β (GSK-3β) is a multifunctional serine/threonine kinase mediating various cellular signaling pathways. The particular pathway depends on its substrates for phosphorylation[27]. Since GSK-3β is also an important mediator of an apoptotic signal, it is plausible that the GSK-3β deregulation observed in cancer cells confers resistance to chemotherapy, which is a major cause of treatment failure in human cancers[28].

In this study we investigated the effect of gemcitabine on the PANC-1 cells in terms of apoptosis-related factors.

A human pancreatic cancer cell line, PANC-1, obtained from the American Type Culture Collection (ATCC, MD, USA), was maintained in Dulbecco’s modified Eagle's medium supplemented with 100 mL/L fetal calf serum, penicillin, and kanamycin at 37°C in a 50 mL/L CO2, 950 mL/L air atmosphere. Gemcitabine (Eli-Lilly Japan, Kobe, Japan) at a concentration of 50 mg/mL was dissolved in the serum free culture medium and stored at -20 °C in the freezer. The concentration range of the treatment was from 2.5 mg /L to 1 000 mg/L.

The Alamarblue dye method was used for cell growth analysis. The 1×104 cells were plated in 96-well microtiter plates. After being incubated for 24 h, gemcitabine was added to the medium. Twenty μL of AlamarBlue dye solution (Iwaki Glassware, Inc., Tokyo, Japan) was added to wells containing 200 μL of medium at the time 12, 24, 48, and 72 h. After being incubated for 3 h, the cell growth was evaluated as the absorbance (A) using a spectrophotometer (Dai-Nippon Pharmaceutical Co., Osaka, Japan). An excitation wavelength of 540 nm was used, and the emission was read at 620 nm. The color of AlamarBlue stock is violet, and changes to red when oxidized. Each treatment was applied to 6 wells, and the experiments were repeated 3 times.

DNA fragmentation was quantitatively assayed using a DNA fragmentation enzyme-linked immunosorbent assay (ELISA) kit (Boehringer Mannheim GmbH, Mannheim, Germany) according to the protocol. Cells were cultured in flat-bottom, 96-well microplates. After incubation in gemcitabine-supplemented media for 24 h, the cells were detached from the wells. The cells were lysed with lysis buffer, and the lysate was processed for streptavidin-coated microtiter plates. After incubation with biotin-labeled antihistone antibody and peroxidase-labeled anti-DNA antibody, the amount of fragmented DNA was determined using 2, 2′-azino-bis-3-ethylbenzthiazoline-sulfonate (ABTS) as a substrate. The plates were read on a Labsystems integrated EIA (Dai-Nippon Pharmaceutical Co., Osaka, Japan) at wavelengths of 540 nm and 620 nm. Each treatment was added to duplicate wells, and the experiment repeated 3 times.

Experimental results were expressed as the mean ± SE. The difference between the means was evaluated with the Mann-Whitney U test. P < 0.05 was considered statistically significant. The statistical analysis was performed using StatView-5.0 (SAS Institute Inc. Tokyo, Japan). 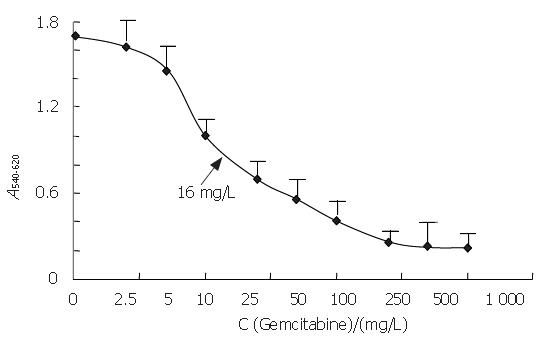 Figure 1 Effect of gemcitabine on the growth of PANC-1 cells. 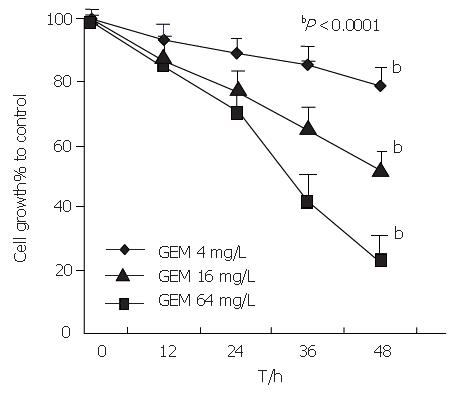 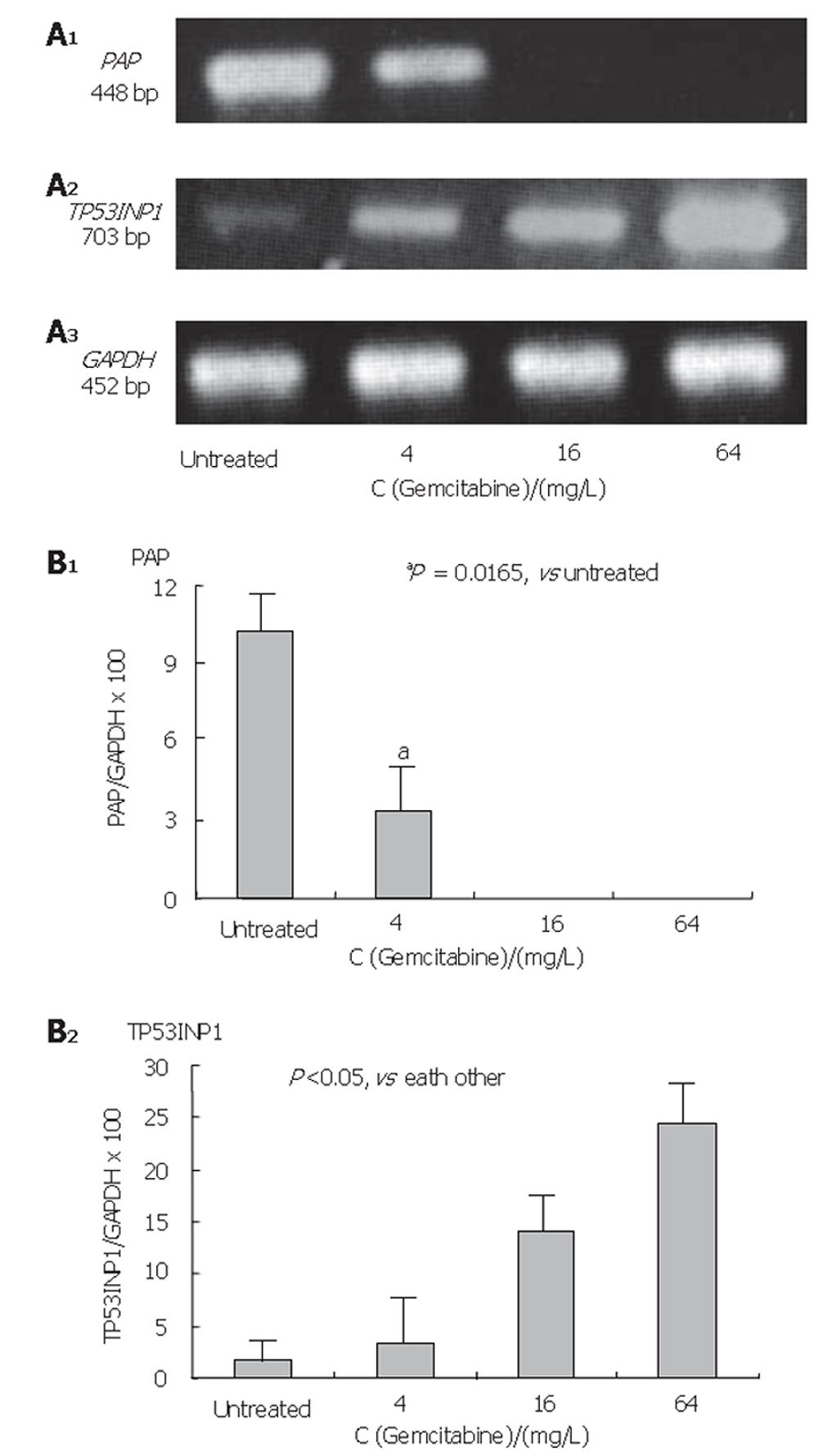 The PANC-1 cell line showed no detectable phospho- GSK-3βser9 in Western blotting analysis with a phospho-specific antibody, indicating GSK-3β activity in this cell line (Figure 4). On the other hand, phospho- GSK-3βser9 was induced after 4 mg/L gemcitabine treatment, and gradually increased with the 16 and 64 mg/L gemcitabine treatment. There was no significant difference in GSK-3β expression between the gemcitabine-treated and untreated groups. 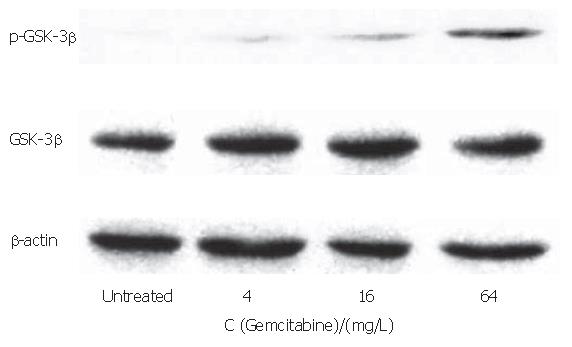 Gemcitabine is a nucleotide analog that is converted to its triphosphate active form in cells and is subsequently incorporated into DNA to terminate strand elongation[13-17]. It shows a favorable clinical outcome in the treatment of pancreatic cancer and non-small cell lung cancer[14,18]. However, there have been few published in vitro analyses about gemcitabine. We therefore attempted to investigate the genes involved in the gemcitabine-induced cytotoxicity of pancreatic cancer cells. In the present study we showed that gemcitabine induced changes in expression of apoptosis-related genes in PANC-1 cells. The expression of anti-apoptotic pancreatitis-associated protein (PAP) was down-regulated, whereas the pro-apoptotic TP53INP1 and p-GSK-3β were up-regulated after being treated with gemcitabine.

Apoptosis is believed to play an important role in tumors, and both pro- and anti-apoptotic factors are simultaneously activated in tumor development and progression. In this study, we showed that PAP expression was significantly decreased in the gemcitabine-induced anti-tumor process. The growth of human pancreatic cancer may require the up-regulation of PAP expression, which would suppress the apoptosis of cancer cells[19]. PAP is one of the effectors of antiapoptosis induced by tumor necrosis factor-α through NF-κB and MAP kinases in pancreatic acinar cells[29]. It was demonstrated that the activation status of the NF-κB, Akt and MAP kinase signaling pathways is often associated with anti-apoptotic signal transduction that is linked to chemotherapeutic agents[16]. NF-κB plays an important role in oncogenesis and promotes cellular resistance to anticancer therapy. Bandala et al[30] showed that gemcitabine treatment increased the activity of NF-κB, and Alexader et al[31] showed that the induction of NF-κB by gemcitabine was dose-dependent in five pancreatic cancer cell lines. In addition, gemcitabine specifically activates p38 MAP kinases in the human pancreatic cancer cell lines, PK-1 and PCI43[16]. Taken together, these findings confirmed that PAP is involved in the gemcitabine induced-apoptosis in a dose-dependent manner.

Apoptosis is one of the major consequences of chemotherapy against malignancies. It is now established that the tumor suppressor p53 inhibits cell growth through the activation of cell cycle arrest and apoptosis. TP53INP1 is a gene that is activated by wild type p53. It cooperates with HIPK2 to promote p53 phosphorylation at ser 46, and then induces apoptosis-inducing protein activation[25,26]. In our conditions, we showed TP53INP1 was up-regulated by gemcitabine treatment from 4 mg/L to 64 mg/L, in a dose-dependent manner. TP53INP1 may be involved in gemcitabine-mediated apoptosis. The precise mechanism of the TP53INP1 increase after gemcitabine treatment is unclear. It has been shown that phosphorylation of the NH2-terminal residues of p53 mediates its stabilization and nuclear accumulation after anticancer drug treatment[28].

Beurel et al[28] has reported that GSK-3β is hyperphosphorylated on serine 9 in human hepatoma cell lines as well as in human and murine tumoral livers. We examined the impact of gemcitabine on GSK-3β activity in PANC-1 cells by measuring the phosphorylation level of GSK-3β at serine 9 as an indicator of GSK-3β inactivation. GSK-3β can act as a positive or negative physiological regulator of the p53 protein. During endoplasmic reticulum stress, p53 is inhibited through a mechanism involving its phosphorylation at ser 315 and ser 376 by GSK-3β. On the other hand, GSK-3β plays a crucial role in cell survival mediated by nuclear factor-kappaB (NF-κB) signaling. Phospho- GSK-3βser9 is an inactive form in normal tissues that suggests the regulation of the balanced expression of the active and inactive forms of this kinase. In our data, phospho- GSK-3βser9 was induced by gemcitabine treatment, indicating that GSK-3βgradually became inactive in the gemcitabine-treated cells. Our results are similar to those of Beurel et al[28], who showed that GSK-3βser9 phosphorylation by lithium treatment on tumor cells conferred resistance to anticancer therapy.

In conclusion, gemcitabine decreases cell proliferation of a human pancreatic cancer cell line, PANC-1, and promotes cellular apoptosis. The antiapoptotic gene, PAP, is down-regulated by gemcitabine treatment, whereas the pro-apoptotic TP53INP1 gene and GSK-3βser9 protein are up-regulated. Gemcitabine can induce apoptosis in cancer cells through GSK-3β and PAP inhibition, and TP53INP1 and GSK-3βser9 activation.