AIM: To investigate the significance of S phase kinase-associated protein 2 (Skp2) expression in human gastric carcinoma and the relation between expressions of Skp2, p27 and PTEN.

CONCLUSION: Skp2 overexpression may be involved in carcinogenesis and progression of human gastric carcinoma in vivo, possibly via p27 proteolysis. PTEN may regulate the expression of p27 by negatively regulating Skp2 expression.

Dysregulation of the cell cycle is required for the for-mation of most malignant tumors. Progression of the cell cycle is controlled by interactions between cell cycle control proteins (cyclins) and their catalytically active cyclin-dependent kinase (CDKs). The activity of each cyclin-CDK complex is in turn regulated by several different mechanisms; the most important being negative regulation by CDK inhibitors[1]. p27 is an inhibitor of cyclinE-CDK2 and cyclinA-CDK2, which drive cells from G1 to S phase of the cell division cycle[2,3]. Loss of p27 function therefore accelerates cell cycle progression and predisposes cells to malignant transformation, as is well illustrated by the observation of increased tumor incidence in hemizygous and homozygous p27-deleted mutant mice after carcinogen exposure[4,5]. Many clinical studies also indicate that low levels of p27 are associated with high aggressiveness and poor prognosis in a large variety of malignant tumors[2,3], including breast carcinoma[6,7], colorectal carcinoma[8], lung cancer[9], prostate cancer[10] and gastric carcinoma[11].

The amount of p27 is mainly regulated by post-translational ubiquitin-proteasome-mediated proteolysis[12]. Cell cycle-dependent degradation of p27 is dependent on phosphorylation at Thr187 in late G1 phase by CDK2 under positive regulation by cyclinE. Thr187 phosphorylation is a necessary prerequisite for the sequential addition of ubiquitin molecules by an ubiquitin ligase complex, SCFskp2 composed of Skp1, Cull, Rbx1 and the F-box protein Skp2[3]. Polyubiquitination of p27 then targets p27 for degradation in proteasome, thus removing the p27 cell cycle “brake” and allowing cells to transition from G1 to S phase[13].

Some investigations have shown that Skp2 is a specific substrate-recognition subunit of SCFskp2, expression of Skp2 is required for the ubiquitination and subsequent degradation of p27 in vitro[20-22], and Skp2 knock-out cells show high levels of p27[16]. The level of p27 has also been reported to be inversely related to that of Skp2 in lymphoma[24], oral squamous cell carcinoma[18,19] and colorectal carcinoma[20].

Recently, Mamillapalli et al[21] reported that PTEN, a tumor suppressor, regulates the ubiquitin-dependent degradation of p27 through SCFSkp2. Yang et al[22] suggested that induction of Skp2 may be causally linked with decreased levels of p27 in prostate cancer and implicate PTEN in the regulation of Skp2 expression in vivo.

One hundred and thirty-eight surgically resected gastric carcinoma specimens, paired adjacent mucosa specimens and paired 102 lymphatic gastric carcinoma tissue specimens metastatically selected from the Fourth Affiliated Hospital of Hebei Medical University were used in this study. All gastric carcinoma patients underwent total or subtotal gastrectomy and no patient received any treatment for cancer before surgery. All regional lymph nodes were removed. The patients comprised 111 males and 27 females with a mean age of 58.5 years and a median age of 60 years (from 36 to 78 years). After surgery, gastric specimens were fixed in 40 g/L neutral-buffered formaldehyde and embedded in paraffin. Additionally, 75 biopsy cases (5 cases of normal gastric mucosa, 10 cases of chronic superficial gastritis, 30 cases of intestinal metaplasia and 30 cases of dysplasia) were included in this study as well. To avoid evaluator variability, all pathological diagnoses were done by two pathologists. Clinical stage was done according to the International Union Contrele Cancer criteria published in 1997.

A standard Non-Biotin HRP two-step immunohis-tochemical method (Zymed) was used. Four-micrometer-thick sections were deparaffinized and rehydrated. Endogenous peroxidase in sections was inactivated in 30 mL/L hydrogen peroxide (H2O2) in ethanol for 15 min at room temperature. The sections were washed thrice for 5 min with 0.01 mol/L phosphate-buffered saline (PBS) and then heated in a citrate buffer (0.01 mol/L, pH 6.4) for PTEN and p27 or in a EDTA buffer (1 mmol/L, pH 8.0) for Skp2 in an 800-W microwave oven for 12 min for antigen retrieval. The sections were incubated with mouse monoclonal antibody to Skp2 (1:50 dilution, Zymed), p27 (1:50 dilution, Santa Cruz) and PTEN (1:50 dilution, Zymed) overnight at 4 °C, washed thrice for 5 min with 0.01 mol/L PBS 3 and then incubated with common IgG (Fab fraction)-HRP complex for 30 min at room temperature. Immunoreactive products were visualized using 3,3’-diaminobenzidine/H2O2, and finally the sections were counterstained with hematoxylin. Some sections were incubated with PBS instead of primary antibody as negative control to verify the specificity of the immunoreactions. Vascular endothelial cells showed strong PTEN expression with a nuclear predominance and served as an internal positive control for PTEN in this study. The positive breast adenocarcinoma served as a positive control for Skp2 and p27.

Immunostaining of nuclear Skp2, p27 and PTEN in each specimen was evaluated microscopically and recorded as the percentage of Skp2, p27, and PTEN-positive cells (labeling frequency), after at least 1 000 nuclei at the lesion site were calculated in at least five high-power fields (×400). All specimens were evaluated without any knowledge of the patients' clinical information.

The differences in Skp2 labeling frequencies among specimens of normal gastric mucosa, chronic superficial gastritis, intestinal metaplasia, dysplasia, gastric adenocarcinoma, adjacent mucosa and lymphatic metastatic gastric carcinoma were compared by Mann-Whitney U test. The relation between Skp2 expression and the clinical and pathological variables was evaluated using the Spearman correlation coefficient. The Spearman’s correlation coefficient testing was also used to determine the relation between Skp2, PTEN and p27 as well as between PTEN and p27. P<0.05 was considered statistically significant. All analyses were performed using SPSS 11.0 statistical software. 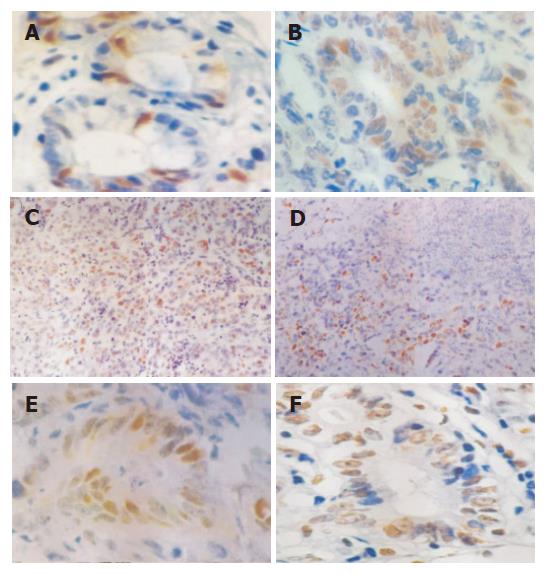 Relation between Skp2, p27 and PTEN expression in gastric carcinoma 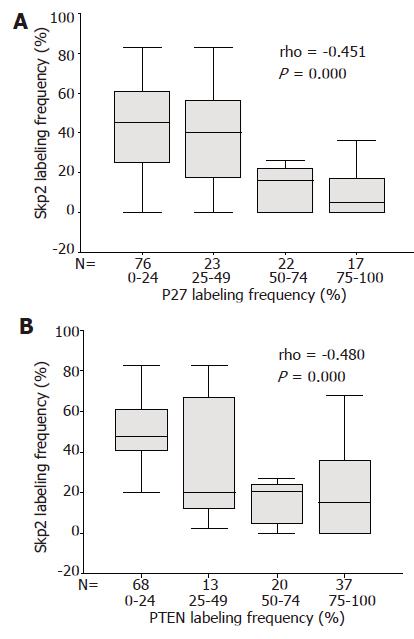 Figure 2 Correlation of Skp2 with p27 (A) and PTEN (B) protein levels. Each box and the associated bars represent the values of middle 50% and the range of the data respectively. The dark line within a box denotes the median. 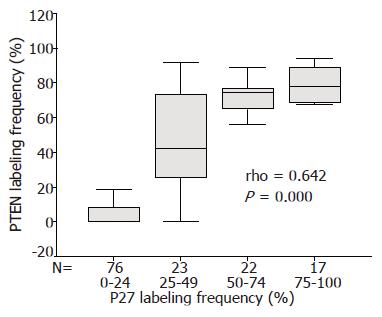 Figure 3 Correlation of p27 and PTEN expression in human gastric carcinoma. Each box and the associated bars represent the values of middle 50% and the range of the data respectively. The dark line within a box denotes the median.
DISCUSSION

Protein degradation by the ubiquitin–proteasome pathway plays a fundamental role in the regulation of eukaryotic cell cycle. Proteolysis of G1 regulatory proteins is mediated by SCF ubiquitin ligase complex (SCFSkps) composed of four major subunits, Skp1, Cul1, Rbx1/Roc1 and one of the F-box proteins (Fbps)[24]. There are 11 Fbps in budding yeast, 22 in Drosophila[25] and 38 in human beings[26,27]. Skp2 is a Fbp first identified together with Skp1 as an interactor of the cyclinA-Cdk2 complex which drives cells from G1 to S phase, hence it is named as S phase kinase-associated protein 2 (Skp2)[24].

In this study, we found that Skp2 immunoreactivity was rare in normal gastric mucosa and chronic superficial gastritis, but Skp2 labeling frequency was significantly increased during the course of intestinal metaplasia, dysplasia and primary gastric carcinoma. From pathological point of view, development of gastric adenocarcinoma involves progression through a well-defined series of histological steps initiated by the change of normal mucosa to chronic superficial gastritis, followed by the appearance of atrophic gastritis and intestinal metaplasia, then dysplasia and finally adenocarcinoma[28]. These results suggest that Skp2 may have oncogenic potential in gastric carcinoma and is involved in gastric carcinogenesis. It may become a new biomarker in gastric carcinogenesis. Additionally, we found that Skp2 labeling frequency in adjacent mucosa of gastric carcinoma was significantly higher than that in normal gastric mucosa, suggesting that some adjacent mucosae of gastric carcinoma have normal histological structure, but the expression of some proteins is changed.

In the present study, we also found that Skp2 expression was inversely correlated with the expression of p27, which is consistent with the results reported in other studies[18,19,21]. These results suggest that Skp2 overexpression is associated with p27 protein deg-radation in cancer tissue, which may be a reason why Skp2 overexpression is involved in carcinogenesis and progression of cancer. Furthermore, Skp2 expression was also inversely correlated with PTEN expression and p27 expression was positively related with PTEN expression in gastric carcinoma. PTEN tumor suppressor acts as a phosphatase of phosphatidylinositol-3,4,5-trisphosphate (PIP3) and negatively controls the G1/S cell cycle transition and regulates the levels of p27[29]. Mamillapalli et al[21] showed that PTEN deficiency in mouse embryonic stem cells decreases p27 level while increases Skp2 level. Conversely, in human glioblastoma cells, ectopic PTEN expression leads to p27 accumulation accompanied with a reduction of Skp2 and ectopic expression of Skp2 alone is sufficient to reverse PTEN-induced p27 accumulation, restore the kinase activity of cyclin E/CDK2 and partially overcome the PTEN-induced G1 cell cycle arrest. Recombinant SCFSkp2 complex or Skp2 protein alone can rescue the defect in p27 ubiquitination in extracts from cells treated with a PI 3-kinase inhibitor. Yang et al[30] showed that loss of expression or reduced expression of PTEN protein contributes to carcinogenesis and progression of gastric carcinoma. Myung et al[31] reported that reduced expression of cyclin-dependent kinase inhibitor p27 is associated with advanced stage and invasiveness of gastric carcinoma. Additionally, Yang et al[22] also found that elevated Skp2 protein expression in human prostate cancer is associated with loss of p27 and PTEN expression. Thus, all these findings suggest that PTEN functions as a negative regulator of the Skp2 pathway that is normally used to control S-phase entry through the regulation of p27 in gastric carcinoma and the effects of Skp2, p27 and PTEN together play an important role in carcinogenesis and progression of gastric carcinoma. These results also suggest that Skp2 functions as a critical component in the PTEN/PI3-kinase pathway for the regulation of p27.

In conclusion, alterations in the levels of proteins controlled by the ubiquitin–proteasome pathway during transformation are likely to be common. Further studies that define how such posttranscriptional control pathways are altered during transformation may provide additional biomarkers or facilitate the identification of novel therapeutic targets. The finding that Skp2 is induced in a number of different cancers suggests that drugs directed at this molecule may provide a more selective target for therapeutic development.