METHODS: The randomized crossover study (two periods, each lasting for 2 wk) involved 16 healthy non-smoking adults of normal weight. The 6-wk study consisted of a run-in (wk 1) PSPL diet (daily consumption of 200 g PSPL) or a control diet (low polyphenols, with the amount of carotenoids adjusted to the same level as that of PSPL) (wk 2-3), washout diet (wk 4), and switched diet (wk 5-6). Fasting blood was collected weekly in the morning. T-lymphocyte function was assessed via the proliferation and secretion of immunoreactive cytokines. Salivary IgA secretion and the specific cytotoxic activities of cytotoxic T lymphocytes and natural killer (NK) cells were determined.

RESULTS: The plasma β-carotene level increased with time in both groups, while the plasma polyphenol level decreased in the control group, and no significant difference was detected between the two groups. Although plasma polyphenol levels did not significantly increase in the PSPL group at the end of the study, they were significantly elevated in urine. PSPL consumption produced a significant increase in proliferation responsiveness of peripheral blood mononuclear cells (PBMC) and their secretion of immunoreactive IL-2 and IL-4. As well, lytic activity in NK cells was elevated in a time-dependent fashion. Salivary IgA secretion significantly decreased in control group after 2 wk, and returned to baseline following dietary switch to PSPL.

CONCLUSION: Consumption of PSPL modulates various immune functions including increased proliferation responsiveness of PBMC, secretion of cytokines IL-2 and IL-4, and the lytic activity of NK cells. The responsible determinants of PSPL remain to be elucidated, as does the biological significance of the present observations.

The high consumption of vegetables and fruits has been linked epidemiologically to a decreased risk of cancer and cardiovascular disease[1]. Their beneficial effects have been attributed partly to the presence of numerous polyphenolic compounds, which display antioxidant and free radical scavenging properties[2]. Polyphenols are the major phytochemicals in fruits and vegetables. A variety of in vitro studies have shown that polyphenols such as flavonoids are antioxidants[3], immunomodulators[4], and exhibit antigenotoxic effects[5].

Purple sweet potato leaves (PSPL), which are easily grown in tropical areas such as Taiwan, have the highest polyphenolic content, in particular flavonoids, of all the commonly grown vegetables, and exhibit free radical scavenging ability[6]. Supplementation of diets with PSPL would seemingly be prudent. However, this recommendation is premature, since little is known from human experimental studies about the physiologic effects of dietary PSPL on the immune system.

Sixteen non-smoking healthy adults (seven men and nine women, aged 20-22 years), with normal weight (body mass index 20.9-21.6 kg/m2) were recruited for the study. All subjects were in good medical health. Their screening histories did not reveal indications of any gastrointestinal disorder. Vitamin supplements or medications were not taken 1 mo preceding the study and during the study period. The study was approved by Medical Ethical Committee of the Taipei Medical University and all participants gave their written consent.

The randomized crossover study was conducted during September to November 2003. Subjects were randomly divided into control group and experimental group, all of them ran in a low polyphenol diet for 1 wk (wk 1). After that, control group consumed a control diet (low polyphenols, with the amount of carotenoids adjusted to the same level as that of PSPL) for 2 wk, experimental group consumed a PSPL diet (daily consumption of 200 g PSPL) for 2 wk (wk 2-3). The washout diet (a low polyphenol diet) was followed for 1 wk (wk 4), and then, the control and experimental groups were given switched diet for 2 wk (wk 5-6). Results were presented in a total study period of 6 wk.

Subjects were provided PSPL and control diet for lunch and dinner by the Department of Dietetics of Taipei Medical University Hospital. The meals were eaten in the hospital cafeteria. Each subject returned any uneaten food to allow food intake to be recorded. A list of the food products that the subjects were not allowed to eat was provided. Each subject kept a record of food consumption, which was checked to ensure compliance with the diet.

Collection and preparation of blood samples Blood from fasting subjects was collected once weekly in the morning between 07.00 a.m. and 09.00 a.m. Blood was drawn from an antecubital vein into the tubes containing 1.6 g/L of EDTA or Li-heparin, which were immediately placed on ice in the dark. Plasma collected by centrifugation at 1 500 r/min for 10 min at 4 °Cwas stored at -80 °C until analysis.

Collection and preparation of urine samples Before and at the end of the intervention period all volunteers were asked to provide a 24-h urine sample. During the collection period urine was stored at 4 °C and kept in dark bottles. Exact sampling time and urine volume were determined, and each sample was stored at -20 °C until analysis.

Quantification of cytokine secretion PBMC were stimulated with Con A as described above for 48 h to measure IL-2 and IL-4 secretion. Cell-free supernatants were collected and stored at -80 °C until analysis. IL-2 and IL-4 were measured by ELISA kit (Biosource, Camarillo, CA, USA).

Cytotoxicity activity assay of NK cells The specific cytotoxic activities of natural killer (NK) cells were tested using a Promega CytoTox 96 kit (Promega, Madison, WI, USA). K562 cells were susceptible target cells to the cytotoxic effects of NK cells. K562 cells and PBMC including NK cells, resuspended in phenol red free RPMI-1640 culture medium containing 5% FBS were coincubated in 96-well round bottomed plates for 4 h at 37 °C. The following PBMC/ K562 cell ratios 30:1, 20:1, 15:1, 10:1, and 7.5:1 were used to find a good effect between NK cells and K562 cells. During the incubation, the NK cells destroyed the target cells and lactate dehydrogenase (LDH) was released. Spontaneous release of PBMC or target cells was controlled by separate incubation of the respective population and detergent was added to lyse all target cells into a complete cytotoxicity. At the end of incubation, the cells were lysed and centrifuged. Fifty microliters of aliquot of each well was transferred into another 96 well flat-bottomed plate and 50 mL of fresh LDH substrate solution was added to each well. The plates were incubated at room temperature for 30 min, and the reaction was stopped by the addition of 1 mol/L acetic acid. The resulting light absorbance was measured in microplate reader at 490 nm. The percentage of cells exhibiting cytotoxic activity was calculated.

Salivary IgA secretion A small absorbent pad was used to collect saliva before brushing of the teeth in the morning. All samples were centrifuged at 13 000 g in a microliter tube. The supernatant was stored at -20 °C until analysis. Salivary immunoglobulin A (IgA)[12] was measured using an immunoassay kit (Salimetrics, State College, PA, USA).

All participants tolerated the intervention well and completed the study. Physical characteristics of the subjects are summarized in Table 1. Body mass index and the percentage of body fat did not vary significantly during the study. PSPL-related daily dietary intake was 902 mg GAE of total polyphenol and 23.42 mg of β-carotene. Control subjects ingested the same amount of β-carotene from 40 to 45 g carrots (268.76 mg/g of β-carotene) each day.

The concentrations of plasma β-carotene and polyphenol measured throughout the study are summarized in Table 2. Plasma β-carotene level increased with time in the PSPL and control groups. However, plasma polyphenol levels decreased in the control group, although the decrease was not significantly different from the PSPL group. In the latter group, the urine levels of polyphenol were significantly elevated (8.200.95 to 10.271.39 mg GAE/dL).

Proliferation responsiveness of Con A-activated PBMC increased significantly after consumption of PSPL (Figure 1). Secretion of T-helper lymphocyte cytokine IL-2 increased after consumption of PSPL for 1 and 2 wk (Figure 2A). The ability of PBMC to secrete immunoreactive IL-4 also significantly increased during the same period (Figure 2B). Lytic activity of NK cells was also affected by PSPL consumption (Figure 3). The results showed that a PBMC/target cell ratio of 30:1 had the highest percentage of cytotoxicity, and the other ratios had the same trend but no significance (data not shown). The percentage of lytic activity of NK cells in a PBMC/target cell ratio of 30:1 was elevated in the PSPL group after 1 wk, and then was further elevated. Salivary IgA secretion in the control group decreased significantly, but returned to the basal levels after 2 wk of PSPL consumption (Figure 4). 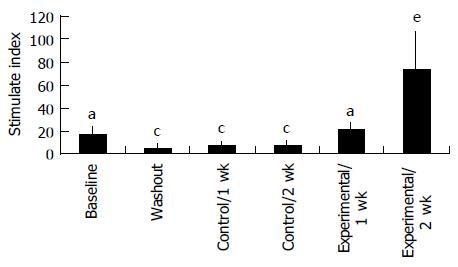 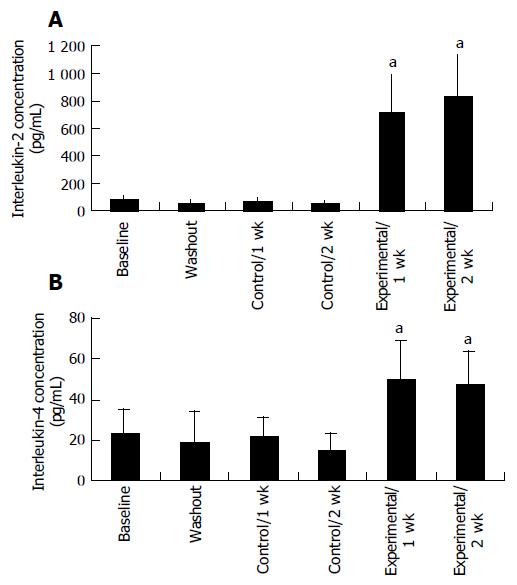 Figure 2 Concentration of interleukin-2 (A) and interleukin-4 (B) secreted by PBMCs. aP < 0.05 for experimental 2 wk vsbaseline, washout, control 1 and 2 wk. 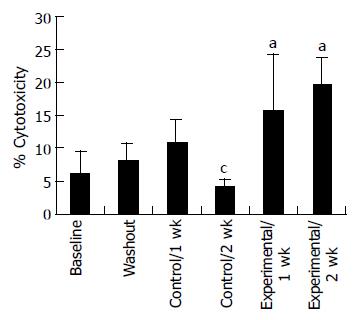 β-carotene-rich carrots were used to calibrate the effect of carotenoids from PSPL. As expected, β-carotene concentration in plasma was not significantly different. In another study, the dietary supplementation with β-carotene (8.2 mg) or lycopene (13.3 mg) for 12 wk does not enhance cell-mediated immunity in healthy free-living elderly humans beings[14]. A low-carotenoid diet reduces T-lymphocyte function, which cannot be restored by the daily supplementation with carrot juice containing 21.6 mg β-carotene, 15.7 mg a-carotene, and 0.5 mg lutein[9]. Presently, control subjects ingesting 23.42 mg of β-carotene each day do not display a significantly altered T-lymphocyte function.

The immune system provides markers for determining the biological health benefits of phytochemicals. Flavonoids suppress a variety of immune functions including lymphocyte proliferation, lytic activity of NK cells, and cytokine secretion in vitro[4]. The same study demonstrated that supplementing a low polyphenol diet with polyphenol-rich fruit juices results in significantly increased lymphocyte proliferative responsiveness, IL-2 secretion by activated lymphocytes, and the lytic activity of NK cells in healthy subjects[17]. These results are in agreement with the findings in our present study.

Many health benefits are associated with the consumption of tea, and are mainly attributed to the polyphenolic constituents. In animals, these constituents exert antioxidative activities and improve the antidotal capability of the liver. We found similar oxidative effects following the 2-wk regimen of PSPL consumption in humans beings (data not shown). Free radicals impair the integrity and functionality of membrane lipids and affect signal transduction and gene expression in immune cells[18]. One potential mechanism underlying the immunomodulatory effect of polyphenols is their ability to act as an antioxidant, resulting in a lower generation of free radicals.

IL-2 and IL-4 are both produced by activated T cells following in vitro stimulation by T-cell mitogens such as Con A. IL-2 is primarily produced by T-helper-1 cells, and IL-4 by T-helper-2 cells[19]. In our study, consumption of polyphenol-rich PSPL resulted in increased secretion of IL-2 and IL-4, which paralleled an enhanced proliferative response of these cells.

IgA is the most important immunoglobulin in saliva, serving as a main immunological defense of mucosal surfaces[16]. Salivary IgA is a sensitive indicator of the humoral immune response to infection[17]. In our study, salivary IgA secretion significantly decreased when subjects consumed low polyphenol diet and returned to the basal level after PSPL consumption, indicating that PSPL consumption may protect mucosal surfaces.

In conclusion, dietary intervention in the form of PSPL consumption can modulate various immune functions. The active constituents in PSPL need to be determined in further investigations.