AIM: To investigate the microsatellite instability (MSI) in cancer and pre-cancerous lesions of the stomach and its mechanisms underlying the development of gastric cancer.

RESULTS: The abnormal shifting of the single-strand DNA (MSI) was identified in 21 out of 36 (58.3%) gastric cancers. Seven cases showed high-level MSI (two or more loci altered) and 14 showed low-level MSI (one locus altered). Gastric cancer with MSI had a tendency to be located in the distal stomach. MSI was also detected in 11 out of 41 (26.8%) dysplasia samples and in 9 of 51 (17.6%) IM samples respectively. Three cases of dysplasia and one case of IM showed high-level MSI. Eight cases of dysplasia and 8 cases of IM displayed low-level MSI. MIS in IM was found only in moderate or severe-grade IM. No association was detected between MSI and dysplasia grade.

CONCLUSION: Accumulation of MSI in dysplasia and intestinal metaplasia of gastric mucosa may be an early molecular event during gastric carcinogenesis and may contribute to the acquisition of transformed cell phenotype and the development of gastric cancer.

There is evidence that gastric carcinogenesis is a long-term, multistep process associated with abnormal alterations in cellular oncogenes, tumor suppressor genes and other genes or factors necessary for cell malignant transformation[1-4]. Genetic instability is strongly involved in neoplastic transformation and progression[5-9]. Microsatellite instability (MSI), an important form of genetic instability associated with defective DNA mismatch repair in tumors, was first described in hereditary non-polyposis colorectal cancer (HNPCC) in 1993[6]. Since then, the presence of MSI has been reported in a variety of sporadic cancers including gastric cancer[5,10-14], suggesting that MSI may play an important role in the development of gastric cancer[15]. Intestinal metaplasia and dysplasia predisposed in gastric mucosa have been regarded as pre-cancerous lesions of the stomach and are closely related to the gastric carcinogenesis[16-19]. However, there are few reports concerning the changeable patterns of MSI in the two pre-cancerous lesions. In this study, we investigated MSI alterations by use of SSCP-PCR technique in gastric mucosa with intestinal metaplasia and dysplasia, and gastric cancer samples to explore the potential role of MSI in gastric carcinogenesis.

Thirty-six gastric cancer samples were obtained from patients undergoing surgery. Forty-one gastric mucosa samples with dysplasia and 51 with intestinal metaplasia were obtained from patients with chronic gastritis undergoing gastro-endoscopy in Jiangsu Provincial Hospital, Nanjing, China. The tumors were graded as well, moderately and poorly differentiated. Lesions of intestinal metaplasia and dysplasia were graded as mild, moderate and severe according to the WHO criteria. Tissues from non-tumor or non-inflamatory gastric mucosa were used as a control in analysis of MSI.

Single strand conformation polymorphism (SSCP) was carried out. In brief, 12 μL of each PCR product was mixed with 12 μL denaturing buffer, denatured at 97 °C for 7 min, loaded onto a non-denaturing 7% polyacrylamide gel and electrophoresed for 3 h at 20 °C. The bands were visualized by silver staining.

Existence of MSI was defined as an band mobility shift from either alleles or as appearance of a new band with a different size in the testing sample compared to the control one. The analysis was performed once more in samples displaying MSI for confirmation of the results. High-level MSI (MSI-H) was recognized, when more than 30% of the markers showed instability and low-level MSI (MSI-L) was recognized, if less than 30% of the markers displayed instability. None of the markers showing MSI indicated microsatellite stability (MSS)[21]. 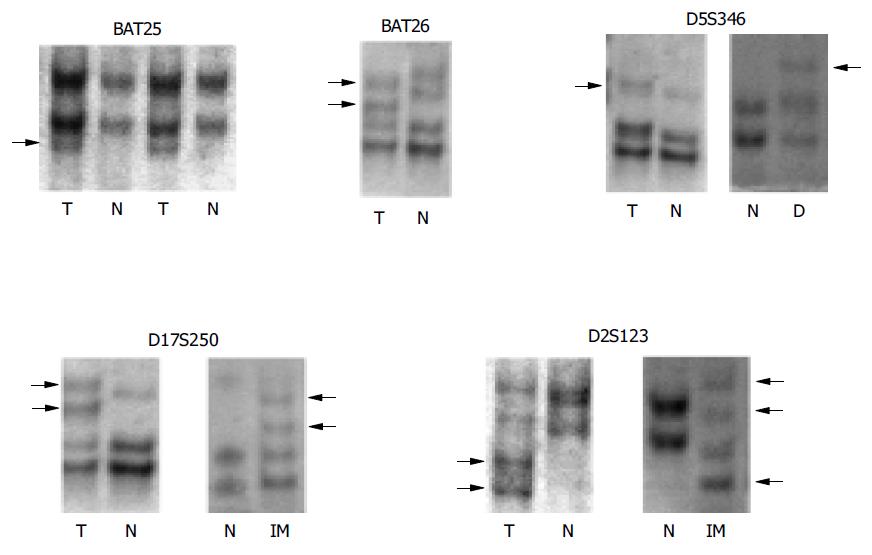 The mechanisms of carcinogenesis in gastric mucosa remain unclear, and may involve multiple genetic and epigenetic changes in susceptible cells of the stomach. Genetic instability including chromosomal instability and microsatellite instability is an important factor for the accumulation of these genetic changes.

Microsatellites are ubiquitous, short, repetitive DNA sequences widely and randomly distributed throughout the human genome, with unknown function. MSI is a form of genetic instability characterized by expansions and contractions of simple sequence repeats in DNA. It represents an important form of genomic instability associated with defective DNA mismatch repair in tumors. MSI can be identified in tumors when alleles of novel sizes are detected in microsatellite sequences derived from cancer DNA that are not present in normal tissues of the same individual. MSI has been observed in a subset of gastric carcinoma ranging from 13% to 44%, even more than 70% in some individual reports[10-14]. The discrepancy in different researches is probably due to different types and numbers of microsatellite markers used in different studies.

The association between MSI and clinicopathologic characteristics of gastric cancer remains unknown. Wu et al[22], reported, that MSI-H gastric tumors are statistically associated with location of the tumor (distal area of the stomach), fewer lymph node metastases and better prognosis. Wirtz et al[23], reported, that no association is observed between MSI and gender, tumor invasion, pathological grade, lymph node metastases, Lauren’s classification and prognosis, which is similar to our results.

IM and dysplasia are considered as early phenotypic changes in cascade of events leading to gastric cancer. Development of some gastric cancer may be the result of an accumulation of abnormal gene change in these pre-cancerous lesions[12,16-19]. In our study, the MSI incidence of IM was 17.6%, lower than that previously reported (30-44.5%)[15,19]. The discrepancy might be due to the IM samples collected from the patients with chronic gastritis, other than gastric cancer and the histological grade of IM. Different markers used in different studies may be another explanation for the discrepancy. MSI is connected with moderate-grade, which is of importance in grading of IM. We detected MSI in 26.8% samples with dysplasia in the present study. Lee et al[24], reported, that there is no significant association between MSI and histological grade of dysplasia.

Investigating the occurrence of MSI in gastric cancer and pre-cancerous lesions may help us to explore the mechanisms of gastric carcinogenesis. Being detected in gastric cancer, IM and dysplastic mucosa, MSI might play a role in the multistep process of carcinogenesis of the stomach. It was reported that a well-differentiated adenocarcinoma develops 3 years later at the IM mucosa displaying MSI[25]. In conclusion, early involvement and continuous accumulation of MSI in susceptible cells of the stomach may trigger the multi-step carcinogenesis pathway. Detection of MSI in pre-cancerous lesions may help us to investigate the stomach carcinogenesis and to identify patients at risk of developing gastric malignancies.