METHODS: Between September 2000 and February 2003, 30 patients with colon cancer who underwent LRH were compared with 34 controls treated by ORH in the same period. All patients were evaluated with respect to surgery-related complications, postoperative recovery, recurrence and metastasis rate, cost-effectiveness and survival.

RESULTS: Among 30 LRH, 2 (6.7%) were converted to open procedure. No significant differences were observed in terms of mean operation time, blood loss, post-operative complications, and hospital cost between LRH and ORH groups. Mean time for bowel movement, hospital stay, and time to resume early activity in the LRH group were significantly shorter than those in the ORH group (2.24±0.56 vs 3.25±1.29 d, 13.94±6.5 vs 18.25±5.96 d, 3.94±1.64 vs 5.45±1.82 d respectively, P<0.05). As to the lymph node yield, the specimen length and total cost for operation and drugs, there was no significant difference between the two groups. Local recurrence rate and metachronous metastasis rate had no marked difference between the two groups. Cumulative survival probability at 40 mo in LRH group (76.50%) was not obviously different compared to the ORH group (74.04%).

CONCLUSION: LRH in patients with colon cancer has statistically and clinically significant advantages over ORH. Thus, LRH can be regarded as a safe and effective procedure.

Since the successful introduction of laparoscopic colectomy by Jacobs et al[1], laparoscopic surgery, especially laparoscopic rectal surgery, for the treatment of colorectal cancer has been developed considerably[2-20]. We previously reported that laparoscopic rectosigmoid colon resection for malignant disease allowed earlier recovery than open surgery without jeopardizing oncological clearance[3]. The results, however, could not extrapolate to right-sided colon cancer because of the wider range of resection, more complicated regional anatomy and more advanced requirements of technique in laparoscopic right hemicolectomy than those of the traditional procedure for rectosigmoid cancer[4]. In this study, we reviewed the results of laparoscopic-assisted resection of right colon carcinoma and compared them with a matched group of patients with resection by conventional open procedure carried out during the same period.

From September 2000 to February 2003, thirty patients with colon carcinoma underwent laparoscopic-assisted right hemicolectomy (LRH) in our hospital. We excluded the patients with the following criteria from LRH group: patients with tumors larger than 6 cm in diameter, patients with tumors infiltrating the adjacent organs as detected by ultrasonography and/or computerized tomography, patients who did not consent to the procedure, patients with intestinal obstruction or perforation, and patients whose oncological staging was Duke’s D. Thirty four patients of the comparative group, with similar exclusion criteria, but matched in gender, age, Duke’s staging, tumor site, previous abdominal operation and extent of resection, were randomly selected from 87 patients who underwent open conventional right hemicolectomy (ORH) during the same period. All patients were preoperatively identified to have malignant tumor through colonoscopy and pathological biopsy. All patients gave their informed consent before the procedure. All the procedures were performed by the same operation team. The demographic data of the patients are shown in Table 1.

The oncological surgical criteria of LRH were the same as those of conventional surgery. Each of them conformed to the radical treatment principles including en bloc resection, no-touch isolation technique, proximal lymph-vascular ligation, complete lymphadenectomy, wound protection, and adequate resected margin of the colon. Patients in LRH group were tilted to the left with head downward and given general anesthesia. The surgeon stood on the left side of the patient, with the first assistant on the right side. After pneumoperitoneum was established by open technique and the pressure was maintained at 15 mmHg, four ports were placed. One 10-mm diameter port was in the upper left abdomen, one 5-mm in the lower left abdomen, and another 5-mm in the right lower abdomen, and one 10-mm at the infraumbilical area. The terminal ileum, cecum, and ascending colon were completely mobilized up to the level of hepatic flexure, with particular attention paid to the ureter and the duodenum. The patient was then tilted with head upward to facilitate the division of the gastrocolic ligament and the mobilization of the transverse colon and hepatic flexure. The ileocolic vessels, the right colic vessels, and the middle colic vessels if necessary were identified and transected with double clips close to their origins. The upper abdominal wound was then extended to the left to deliver the bowel and tumor with the protection of a plastic sac. The divisions of remaining mesentery, marginal artery, and bowel, as well as the ileocolic anastomosis, were performed extracorporeally.

The data were expressed as mean±SD. Student’s t test and Mann-Whitney U-test were used to analyze quantitative variables and chi-square test was used to analyze qualitative variables. Survival was calculated by the Kaplan-Meier method, and difference between the groups was compared with the log-rank test. P<0.05 was considered statistically significant. All the statistical analyses were performed using SPSS 11.0 software.

The demographic data of the two groups are shown in Table 1. There was no significant difference in gender, age, Duke’s staging, previous abdominal operation and tumor site between LRH and ORH groups. Two patients in LRH group required conversion to open surgery because of unexpected bulky tumor and severe adhesion in abdominal cavity.

No operative death occurred in both groups. Mean operation time of LRH and ORH groups was 152.65±28.29 and 147.25±27.50 min respectively, with no significant difference (Table 2). The blood loss in LRH group (112.94±96.36 mL) was significantly less than that in ORH group (274.50±235.43 mL) (P = 0.009, Table 2). Five patients in LRH group experienced postoperative complications: two with pulmonary infections, two with wound infections and one with incomplete intestinal obstruction, while 10 patients of postoperative complications were found in ORH group (Table 2). The morbidity in ORH group was slightly higher than that in LRH group, but the difference was not statistically significant (Table 2).

All the patients were followed-up. The mean follow-up time was 27.15 mo (range 12-40 mo) for LRH group and 26.19 mo (range 13-40 mo) for ORH group. Two patients (6.7%) in LRH group developed local recurrence, 3 cases (10.0%) and 1 case (3.3%) died of hepatic metastasis and pulmonary metastasis, respectively, and 2 patients (6.7%) died of other causes not related to colon cancer. The local recurrence rate and metachronous metastasis rate of the two groups were similar. There was no port site or wound recurrence in either group. Cumulative survival probabilities at 40 mo in LRH group and ORH group were 76.50% and 74.04%, respectively, and no significant difference was found between the two groups (Figure 1). 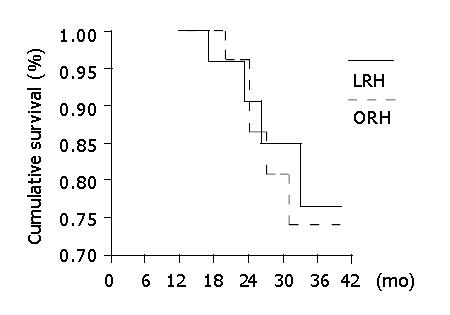 Figure 1 Cumulative survival probability of LRH group and ORH group (cancer-related mortality only). The difference between the two groups was not statistically significant.
Comparison of the cost for operation and drugs

Laparoscopic colorectal surgery, especially for rectosigmoid cancer, is becoming increasingly popular with decent initial results[2,3,5-13]. But due to relatively complicated anatomy and much higher requirements for surgery technique, laparoscopic right colectomy is developing relatively slow compared to laparoscopic ectomy[14]. Laparoscopic colectomy for colic malignancy has not been generally accepted, and it is still controversial aboat the operative safety, oncological results and long-term survival rate[21,22]. This homochronous clinical contrast study compared the clinical effects of laparoscopic and traditional open right colectomy, so as to investigate the applicability of laparoscopic surgery for right colon cancer.

Our study showed that in LRH group patients, the time to resume normal gastrointestinal function and early activity, and the duration of hospital stay were shorter compared to the ORH group. In addition, less postoperative analgesia requirements and less wounds of LRH benefited the earlier recovery of the patients, which is in agreement with the results of some previous studies[14-19]. Compared to laparoscopic rectal cancer surgery, LRH is more comp-licated in technique and needs much longer operation time, so the learning curve is much longer[23-26]. In comparison with ORH group, less blood loss and comparable postoperative complications in LRH group suggested the similar surgical safety between both groups. Furthermore, the clearer anatomic view of the laparoscopy may ensure the safety of surgery. We also found that if the tumor was larger than 6 cm in diameter, invaded liver or was difficult to isolate due to severe intraperitoneal adhesion in laparoscopic colectomy, it should be converted to open surgery, which may guarantee much more safety of the operation.

Laparoscopic colectomy does not change the oncologic surgical principles, including en bloc resection, no-touch isolation technique, proximal lymph-vascular ligation, complete lymphadenectomy, wound protection, and adequate margin of resection[14]. A large number of clinical studies have confirmed that laparoscopic surgery for colorectal cancer has the same oncological clearance as the open procedure[2-19]. In this study, we also obtained a similar conclusion with our previous study about laparoscopic surgery for rectosigmoid malignancy[3]. When there was no difference in tumor location and Duke’s staging, the pathological parameters, concerning the specimen length and lymph node yield did not reveal any statistical differences between the two groups. Follow-up results showed that the local recurrence rate, metachronous metastasis rate, and short-term (40 mo) survival rate between the two groups were comparable, which is in agreement with the previous clinical studies[13-18]. In fact, considering that most local and distant metastases occur within the first 3 years[27,28], it clearly shows that the laparoscopic approach does not increase the risk of local and distant recurrence in a long-term period of follow-up.

Another significant finding of our study is that we investigated the cost effectiveness of the laparoscopic procedure for the first time in China. Our study showed, with the comparison of expenditure of the open procedure, the cost of surgery in LRH group was significantly higher, but the total cost of operation and drugs had no significant difference between the two groups. It implies that because of quicker postoperative recovery, fewer postoperative complications and shorter hospital stay, the cost of drugs in the LRH decreases considerably, which is similar to other cost effective analyses of laparoscopic procedures[29,30].

Although there might be selection bias in this study as patients’ allocation was not done at random, the data suggest that LRH for right-sided colon cancer have the same oncological clearance, surgical safety, cost effectiveness, and patient survival as ORH. In addition, patients can benefit from quicker postoperative recovery of laparoscopic surgery. A randomized study is necessary to prove the true value of LRH for colon cancer.