AIM: To determine the features of microsatellite alterations and their association with clinicopathological characteristics of hepatocellular carcinoma (HCC).

Hepatocellular carcinoma (HCC) is one of the most frequent human cancers worldwide and has become the second cancer killer in China, since the 1990s[1]. Epidemiological studies in high-risk populations have identified chronic hepatitis B or C virus infections as well as dietary exposure to aflatoxin B1 as major factors in the etiology of this disease[2]. The genesis of human cancers is a multistep process reflecting cumulative genetic alterations that include activation of oncogenes or inactivation of tumor suppressor genes[3,4]. It has been proposed that genetic instability or genomic instability in human cancers can be divided into two types: chromosomal instability or loss of heterozygosity (LOH), which can result from errors in chromosome partitioning, and microsatellite instability (MSI), which is usually equated with DNA polymerase errors. Both LOH and MSI are considered to be phenotypes of genomic instability[5,6]. LOH is frequently observed on chromosomes 1p, 4q, 5q, 8p, 8q, 9p, 10q, 11p, 13q, 14q, 16q, 17p, and 22q in HCC, which suggests that tumor suppressor genes may take part in hepatocarcinogenesis[7-9]. MSI and mutations of mismatch repair gene have been reported in chronic hepatitis, cirrhosis and HCC in recent studies[10-14]. In the present study, we examined the genetic instability in 56 HCCs with 55 high-polymorphic microsatellite markers of chromosomes 1, 4, 8, 16, and 17, and analyzed the association of microsatellite alterations and the clinicopathological characteristics of HCC, in order to further understand the molecular mechanisms of hepatocarcinogenesis.

Fifty-six liver cancer specimens from surgically resected tissues were obtained from Eastern Hepatobiliary Surgery Hospital, Second Military Medical University. All patients have not received any prior therapy. All specimens were confirmed with histopathological examination. This study included 43 men and 13 women. The age ranged from 29 to 78 years. Thirty-five of fifty-six patients had serum alpha-fetoprotein (AFP) ≥20 µg/L. There were 39 cases positive for HBsAg. Twelve cases had small HCCs (≤3 cm) and 44 had advanced HCCs (>3 cm). Histopathological diagnosis was made according to the WHO histological classification of tumors of the liver and intrahepatic bile ducts (2000). Twenty HCCs were well differentiated, 28 were moderately differentiated and 8 were poorly differentiated. Of the 56 patients, 45 had evidence of intrahepatic metastasis (portal vein invasion and/or intrahepatic dissemination). Forty-seven HCCs were detected accompanying liver cirrhosis.

Fresh samples were obtained, immediately frozen in liquid nitrogen and stored at -80 °C until analysis. A microdissection technique with a cryostat was used to separate tumor cells from corresponding noncancerous liver tissues. Genomic DNA was extracted from carcinoma tissue and corresponding noncancerous liver tissues, using the standard phenol/chloroform method[15]. Concentration of DNA was determined with both spectrophotometric and fluorometric methods.

Fifty-five microsatellite loci used in this study with chromosomal positions are listed in Table 1. The chromosomal positions and sequences of each microsatellite marker could be referenced to the genome database (http://gdbwww.gdb.org/) and the co-operative human linkage center (http://www.chlc.org/). Each primer pair was fluorescent dye labeled. The PCR mixture contained more than 10 ng of genomic DNA, 200 µmol/L of each dNTP, 1.5 mmol/L MgCl2, 0.5 unit of AmpliTaq Gold DNA polymerase (PE Applied Biosystems, Foster City, CA, USA), 0.5 µmol/L of each primer, and 10×AmpliTaq Gold PCR buffer in a final volume of 10 µL. After denaturation at 94 °C for 12 min, DNA amplification was performed for 15 cycles at 94 °C for 30 s, at 63 °C for 60 s (decreased 0.5 °C of each cycle), and at 72 °C for 90 s; then for 25 cycles at 94 °C for 30 s, at 56 °C for 60 s, and at 72 °C for 90 s; with a final extension at 72 °C for 10 min. PCRs were run in a Biometra thermocycler (Biometra, Germany).

PCR products were purified by 70% alcohol, twice after amplification. The reaction conditions sometimes yielded an unsatisfactory amplification for certain markers and were modified, and if necessary, these particular markers were run singly. The injection mixture was prepared for each capillary buffer by adding the following to each well of the injection palate: 2 μL purified sample, 0.25 μL ET400-R size standard, and 2.75 μL loading solution (Amersham Pharmacia Biotech). The injection mixture was centrifuged and heat-denatured for 2 min at 94 °C, then immediately cooled and placed on ice. Samples were electrophoresed on the MegaBACE-500 capillary array electrophoresis sequencer, and the fluorescent signals from different sized alleles were recorded and analyzed using Genetic Profiler version 2.1 software.

Identification of LOH and MSI

The existence of LOH or MSI was determined by comparing the area between cancerous tissues and corresponding noncancerous liver tissues. When two amplified bands per locus were detected in noncancerous liver tissue specimens, the case was defined as informative for analysis (Figure 1A). It was abandoned when only one amplified band per locus was detected in noncancerous liver tissue specimens (Figure 1B). For a given informative marker, LOH was identified when one of two bands was absent between the tumor DNA and normal DNA (Figure 2). MSI was assessed using the five markers recommended by the NCI workshop. MSI high (MSI-H) HCCs were defined as those having two unstable markers of the five markers (D2S123, BAT-26, D5S346, D13S170, and D17S250). MSI was defined as a band shift in one of the two alleles or the presence of novel bands in the two alleles or in the tumor DNA (Figure 3)[16]. Analysis of LOH and MSI was performed at least in duplicate. 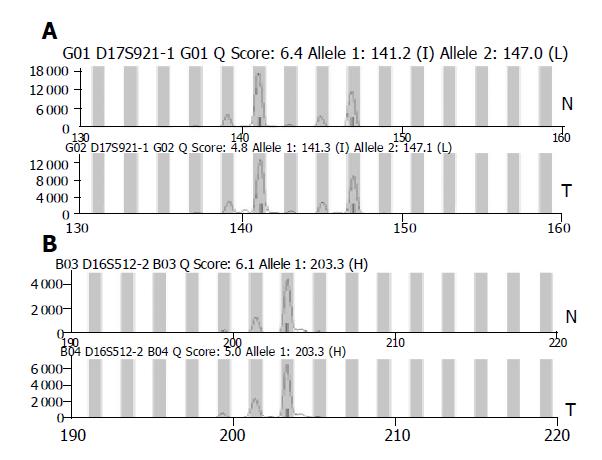 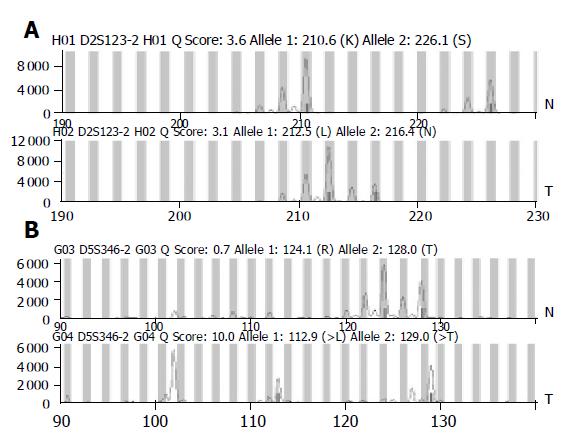 The differences between the frequency of LOH and clinicopathological features were statistically analyzed using χ2 test. P<0.05 was considered statistically significant.

RESULTS
Frequency of LOH and MSI

Relationship between LOH and clinicopathological characteristics

Recently, genomic alterations in HCC have been studied by comparative genomic hybridization, and several chromosome changes have been reported. The gain of 1q, 8q, and 17q and the loss of 4q, 8p, 13q, 16q and 17p were commonly found in HCC. The chromosome regions with gain contained critical oncogenes, whereas those with loss contained tumor suppressor genes[17-19]. Frequent LOH on chromosomes 1p, 4q, 6p, 8p, 13q, 16q, and 17p by whole genome allelotyping suggested that putative tumor suppressor genes on these chromosome regions might play important roles in the development and progression of HCC[7-9].

HBV infection has been regarded as an important factor in the development of HCC[32]. However, the molecular mechanism is unclear. Wong et al[18], have assessed the genome-wide chromosomal analysis in 83 tumor samples from Hong Kong, Shanghai, Japan, and USA by comparative genomic hybridization. The most striking feature from the analysis was the high number of aberrations per sample in the HBV-related cases from Shanghai, which was significantly more than that in the other groups. Becker et al[33], have shown frequent loss of chromosome 8p in HBV-positive HCC from China. In this study, we found that the incidences of LOH on D1S2893, D1S507, D4S406, D8S277, D17S831, and D17S938 were significantly higher in patients with positive serum HBsAg than in those with negative HBsAg. These data imply that HBV infection might cause genetic changes within chromosomal regions where this is important for the development of some HCCs. Interestingly, LOH on D4S1538, D8S261, D8S298, D8S1733, D16S512, D16S515, and D17S926 occurred more frequently in HBsAg-negative patients than in HBsAg-positive patients. These results suggest that the tumor suppressor genes near these loci might be responsible for HBV-negative HCC.

Aggressive tumor phenotypes such as larger tumor size, poor cellular differentiation, absence of tumor encapsulation and intrahepatic metastasis were associated with LOH at several specific loci[34,35]. LOH was associated with an elevated serum AFP[21]. LOH on D8S298 at 8p22 was closely associated with venous permeation, tumor microsatellite formation, and larger tumor size[22]. LOH on locus D8S1721 at 8p23.1 was seen more frequently in nonencapsulated tumors and LOH on D8S1771 at 8p21.3 was associated with a larger tumor size and poorer cellular differentiation. LOH on D1S214 (lp36.3) and D1S2797 (1p34) was more frequently detected in tumors with intrahepatic metastasis than in those without[9]. In this study, large tumor size (>3 cm) tended to have a higher frequency of LOH on D8S298, D8S1771, D16S498, and D17S926. LOH on D4S426, D4S1615, D4S1652, D16S498, and D17S926 was more frequent in poorly or moderately differentiated HCC than in well-differentiated HCC. LOH frequencies of D8S1721 were significantly higher in patients without intact tumor capsule than in those with intact tumor capsule. LOH on D4S2921, D8S298, D8S1771, D17S926, and D17S786 were more frequently detected in tumors with intrahepatic metastasis than in those without. These results supported that 1p, 4q, 8p, 16q, and 17p deletions at specific loci were associated with tumor progression and aggressive behavior. Association of LOH at specific loci with a more aggressive tumor behavior suggests that loss/inactivation of putative tumor suppressor gene (s) located at these regions may confer a tumor growth advantage and contribute to the progression of HCC. This finding agrees with a previous report using CGH analysis, which suggested that the deletion was associated with tumor metastasis in HCC patients[35].

MSI with associated deficient DNA mismatch repair was first described in hereditary nonpolyposis colorectal cancer and has been implicated in the pathogenesis of a variety of gastrointestinal and other cancers[5]. It is noteworthy that there are some differences in MSI frequency of HCC reported in literatures. The MSI frequencies of HCC were 41-66.6% in Greece, USA and France[11,36]. However, Piao et al[37], and Yamamoto et al[38], reported the absence of MSI in Korean or Japanese HCCs, and considered that MSI played no role in the development or progression of HCC. Macdonald et al[39], found that the frequent LOH of MSI in HCC linked to hMSH2 and/or hMLH1 was only 19.6%, usually in association with MSI. Besides, another recent study on Chinese HCCs spanning 22 autosomes using 292 highly polymorphic markers showed that MSI was rarely seen[28]. In our study, MSI was found in 18 of 56 HCCs (32.1%) at one or several loci. Ten of fifty-six (17.9%) HCCs had MSI-H. Cases mostly were positive for serum HBsAg. Some studies showed that the incidence of MSI in cirrhotic liver tissues (27%) was almost three times higher than that in noncancerous liver tissues exhibiting findings compatible with chronic hepatitis (10%). In addition, the incidence of MSI in cirrhotic liver tissues did not differ from the incidence in HCCs[40]. The above-mentioned discrepancies may be partly due to the difference in selected cases, the sensitivity of methodology, and the type and number of polymorphic markers used in these studies. The other factors such as different geographic area and different criteria for MSI might contribute to the difference.