METHODS: A total of 248 IBD patients diagnosed and hospitalized in the Department of Infectious Diseases in Bialystok between 1990 and 2003 were included in the study. We analyzed age, sex, education, characteristics of job, type of the environment, discontinuation of employment due to IBD, colitis extent, need of surgical treatment, and coexistence of other diseases.

RESULTS: Two hundred and thirty-three IBD patients (94%) were diagnosed as ulcerative colitis (UC), and only 15 (6%) were diagnosed as Crohn’s disease (CD). Patients with CD were significantly younger at the time of diagnosis and male predominance was observed. The mean age of the patients at the time UC diagnosis was 44.9±1.1 years. Histogram of the age of patients showed the characteristic biphasic distribution with two peaks between 20 and 40 years and between 60 and 70 years. The predominant form of UC was left sided colitis, which affected almost 80% of the studied population. The most extensive form - pancolitis was present in 34 patients (15%). Only 6% of UC patients required surgery, whereas 36% of CD patients underwent surgery (P<0.005). Among coexisting disorders, cholelithiasis was the most prevalent and demonstrated in 35 patients (14%), pulmonary disorders were diagnosed in 2%, and psoriasis in 1.4%. Since 1998, the number of admitted IBD patients has slightly increased.

CONCLUSION: Occurrence of UC in Poland is much higher than that of CD. The majority of UC cases are diagnosed in young people (20-40 years) with the predominance of male patients. The most common clinical form of UC is left sided colitis.

Inflammatory bowel diseases (IBD) including ulcerative colitis (UC) and Crohn’s disease (CD) occur with different frequencies around the world. The countries reporting the highest estimates of UC are USA, UK and Sweden[1-3]. The countries reporting the lowest estimates of UC are the countries of southern Europe, South Africa and Australia[4]. The epidemiological data of the UC prevalence in Europe are provided by the Western Europe countries[5]. Only few and scattered reports come from the countries of the Eastern and Middle Europe. No information is available regarding the incidence and characteristics of IBD in Poland. Therefore, the main objective of our study was to provide the clinical and epidemiological data of IBD patients of North-Eastern Poland treated in our hospital between 1990 and 2003.

All patients diagnosed with IBD and hospitalized in the Department of Infectious Diseases in Bialystok between 1990 and 2003 were included in the study. As a rule all patients from Bialystok area with onset of diarrhea were referred to our Department. IBD diagnosis was based on typical clinical course of the disease and endoscopic examination with histologic confirmation of UC or CD. Patients with unidentified colitis and infectious enterocolitis were excluded.

Data were retrieved from electronic database of all patients hospitalized in Department of Infectious Diseases in Bialystok. We analyzed age, sex, education, characteristics of job, type of the environment, discontinuation of employment due to IBD, colitis extent, need of surgical treatment, and coexistence of other diseases.

Measured values were expressed as mean±SE. Significance of differences between studied groups was calculated by non-parametric Mann-Whitney U test and χ2 test. P <0.05 was considered statistically significant. Statistical analyses were performed with Statistica 5.0 for Windows (Statsoft Inc., Tulsa, USA).

A total of 248 IBD patients were included in the study (mean age 44.3±1.1 years). Epidemiologic characteristics of the studied population are presented in Table 1. Two hundred and thirty three IBD patients (94%) were diagnosed as ulcerative colitis, and only 15 (6%) were diagnosed as CD. Therefore the UC/CD ratio was over 15:1. Patients with CD were significantly younger at the time of diagnosis (44.9±1.1 vs 34.3±2.9 years, P = 0.01) and male predominance was observed (male/female ratio was 1.2 for UC, and 4.0 for CD). There were no significant differences between UC and CD when education, type of job or environmental background were taken into consideration (Table 1). Family history of the disease was noticed only in 2 cases (4 patients). 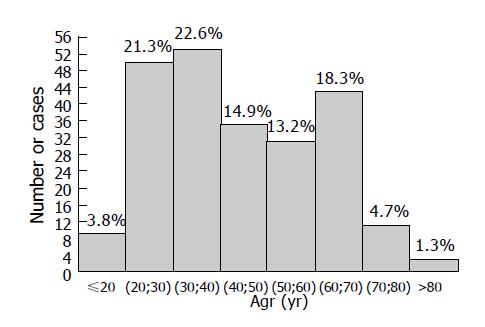 Figure 1 Age distribution at the time of UC diagnosis.

The predominant form of UC was left sided colitis, which affected almost 80% (n = 183) of the studied population. The most extensive form - pancolitis was present in 34 patients (15%). The extent of UC was age-dependent. The mean age of patients with pancolitis was 38.4±2.4, left side colitis 45.8±1.3 and proctitis 49.2±3.4 years (P = 0.02). There were no significant differences related to CU extent in respect to sex, environment and job (Table 2).

Among coexisting disorders, cholelithiasis was the most prevalent and demonstrated in 35 patients (14%), pulmonary disorders were diagnosed in 2% and psoriasis in 1.4%.

Forty-two men (35%) and 45 women (42%) terminated their professional activity because of UC before retirement age. Therefore the overall proportion of patients unable to continue their professional activity due to UC was 0.37 (95% CI 0.31-0.43). The mean age of these patients was 43.4±1.5 years, and did not differ significantly between men (47.1±2.4) and women (43.0±2.5). The highest number of patients who discontinued employment was observed in pancolitis group (62%, P = 0.02 vs other UC extension, Table 2). Another factor affecting job discontinuation was surgical treatment (67% vs 36% of patients with conservative treatment, P = 0.05).

Between 1990 and 1998 the number of IBD patients admitted to the Department of Infectious Diseases was stable (median 61, range 54-73 per year), then slightly increased (median 97, range 80-126 per year, Figure 2). There was no noticeable shift in male/female ratio or patient’s age. 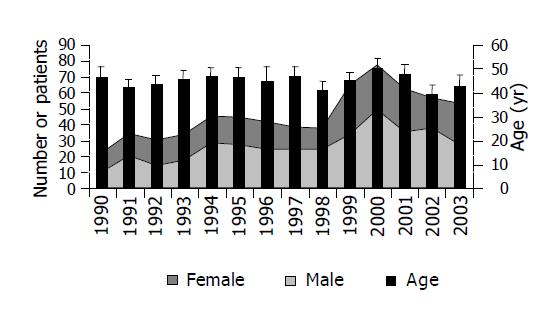 Figure 2 Number of admitted patients, male/female ratio and age of patients in 1990-2003.
DISCUSSION

Epidemiology of IBD is known only in a few European countries. Multi-center prospective epidemiologic studies have been conducted mainly in the countries of Western and Southern Europe[5]. Epidemiological data related to IBD in Poland have been published over 20 years before[6-9]. Since then diagnostics and treatment of IBD have undergone some significant changes, which gave us a major impulse to investigate the problem based on the data of IBD patients treated in the Department of Infectious Diseases in Bialystok in 1990-2003.

In 1990-2003 we treated 248 patients. The first immediate observation was the increase of IBD cases in Poland. Previous data from 4 hospitals in North-Western Poland collected between 1965 and 1972 referred to 30 patients with UC and 3 with CD[8]. Another study analyzed 215 IBD patients in 1955-1970[9]. Bartnik[6] treated 406 UC patients between 1955 and 1970. However, it is important to notice that the latest study was conducted in the referral center for digestive diseases throughout the period of 15 years, and their patients originated from the biggest central region of Poland. Our patients came from a small region of Podlasie with a population of over 1 million. In this area there are few other units specializing in treatment of UC, but the majority of patients are usually referred to our hospital.

The diagnosis of IBD can be made at any age, and CD is diagnosed most frequently in younger patients than UC. It is in accordance with our study, because the age of UC patients is 45 years and CD being 34 years. We have noticed an increase of male patients (1:1.3) whereas in available previous Polish data females predominate (1.4:1)[6,8,9]. However, male predominance is also demonstrated in other studies[10,18].

Family history of the disease in UC patients was relatively low (1.6%). However it fits within the window demonstrated by Kaighely[11]. A number of studies suggest that appendectomy is associated with a low risk for subsequent ulcerative colitis. Our study showed that only 2% of patients after appendectomy developed UC. Similarly, a low percentage is documented by Reif[21]. We demonstrated the occurrence of gallbladder stones in 14% of UC patients and 2% of CD patients. Lorusso[22] reported that cholelithiasis is found in 9.6% UC patients and Reif[21] reported that 1.5% UC patients undergo cholecystectomy.

Proctitis was predominant in our patients. Pancolitis was observed usually in the younger population. Similar data are available from different international studies[11,19,23]. As reported in the majority of studies, over 90% of patients responded to pharmacotherapy. Only 6% of our UC patients required surgical treatment, whereas 36% of CD patients underwent surgery.

An interesting observation of our study is that about 37% of the patients retired because of UC regardless of the nature of their employment. Similar figures (32%) are reported in USA and Canada [24,25].

In conclusions the occurrence of UC in Poland is much higher than that of CD. The majority of UC cases are diagnosed in young people (range 20-40 years) with the predominance of male patients. The most common clinical form of UC is left sided colitis.