AIM: To clarify the role of cag pathogenicity island (cagPAI) of Helicobacter pylori (H pylori) in the pathogenicity and immune prophylaxis of H pylori infection.

METHODS: Three pairs of H pylori including 3 strains of cagPAI positive wildtype bacteria and their cagPAI knockout homogenic mutants were utilized. H pylori binding to the gastric epithelial cells was analyzed by flow cytometry assays. Apoptosis of gastric epithelial cells induced by H pylori was determined by ELISA assay. Prophylaxis effect of the wildtype and mutant strains was compared by immunization with the sonicate of the bacteria into mice model.

RESULTS: No difference was found in the apoptasis between cagPAI positive and knockout H pylori strains in respective of the ability in the binding to gastric epithelial cells as well as the induction of apoptosis. Both types of the bacteria were able to protect the mice from the infection of H pylori after immunization, with no difference between them regarding to the protection rate as well as the stimulation of the proliferation of splenocytes of the mice.

CONCLUSION: The role of cagPAI in the pathogenicity and prophylaxis of H pylori infection remains to be cleared.

Helicobacter pylori (H pylori) infected over half of human adults in the world, especially in Asian-Pacific countries. Only a small portion of patients display clinical symptoms such as peptic ulcer and gastric cancer[1-14]. The difference between the infection and the outcomes is determined by both bacterial factors and host responses. Among the bacterial factors, cag pathogenicity island (PAI) had been studied widely, while the immune response to the infection is the overwhelming host factor that affects the outcome of infection. In respect of the bacterial factors, cytotoxin associated gene A (cag A) protein is usually considered as a toxic marker of the bacterium. A related gene cluster, PAI encodes several proteins with the similar biological activities. To define the relationship bwteen cagPAI and the pathogenicity of H pylori, three pairs of H pylori haboured cagPAI and their isogenic PAI knockout mutants were utilized. Their roles in the binding and apoptosis inducing activities as well as the immune protection were compared in vivo and in vitro.

H pylori culture and H pylori sonicate (SON) preparation were performed by standard procedures There was no difference between the groups of wildtype and knockout bacteria in the rate of growing (Figure 1). 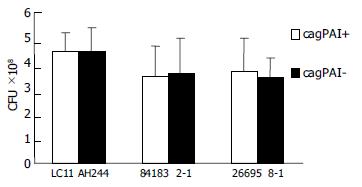 Flow cytometry was used to detect adhesion of H pylori binding to gastric epithelial cellsH pylori strain (ATCC26695) was marked by 10 mL/L PKH-26 and washed three times. The liqiud after the third washing was used in the control groups, then bound to gastric epithelial cells (KatoIII) (bactria/cells = 300:1), and incubated at 37 °C for 60 min. After washed, the sample was detected by FACs.

ELISA was used to detect apoptosis of gastric epithelial cells induced by H pylori The basic mechanism was to detect the release of DNA combined histone. Accroding to the recommended procedures, cracked Kato-III cells with anti-histone monoclonal antibody were incubated and color was developed after adding substrate. Absorbency at the 405 nm level was measured in the enzyme-tagging instrument. Then, the apoptotic index (AI) was calculated in comparison with control group.

Before immunization and inoculation of H pylori, the mice were prohibited from water and food for over 12 h. Thirty min before inoculation, the mouse was fed with 200 μL (0.01 mol/L) NaHCO3 solution to neutralize gastric acid. The experimental group and the control group were inoculated with antigens and adjuvants, immunized on d 0, 7, and 14. They were allowed to drink water 1 h after immunization. Each group was attacked with H pylori 108CFU once every other day, 3 wk after the latest immunization. The mice were killed 8 wk after the latest attack.

The spleen and stomach were removed immediately after the mouse neck was broke. The spleen was kept in the axenic cell culture media temporarily and dealt with it for 4 h. The stomach was cut along the greater curvature, washed with axenic fluid, then some tissues were sampled for rapid urea enzyme test and histological examination. Histological examination was graded semi-quantitatively according to the standard as follows: 0 point: no H pylori; 1 point: 1-2 H pylori in some gastric pits; 2 points: 3-10 H pylori in majority of gastric pits and 3 points: over 10 H pylori in majority of gastric pits.

CagPAI positive culture and mutant strains showed a different bacteria/cell ratio, and were, marked with PKH26, then they were incubated with stomach cell Kato-III, the adherence ability was measured with flow cytometry positive cells and mean fluorescence intensity (MFI) were calculated. No difference was found between wild strain and mutant strain. The result was displayed in Figure 2. 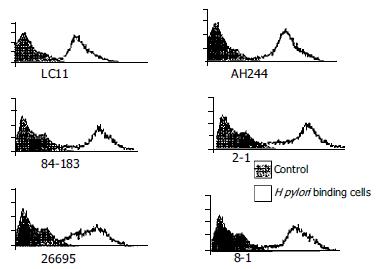 CagPAI and mutant strain were cultured with gastric epithelia cells at the ratio 300:1 for 24 h. The cells were degeaded, the cell apoptosis was detected by ELISA. We found that the apoptosis-induced ability of 26695 was slighty higher than that of 8-1 strain, and no diffirence was found in other couples. The result is displayed in Figure 3. 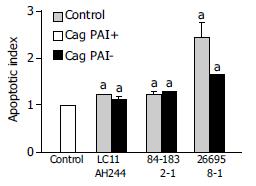 Figure 3 Apotosis of gastric epithelial cells induced by positive cagPAI and knockout H pylori strains (determined by ELISA aP < 0. 05 vs the control).
Immune prevention to the cagPAI and H pylori

The protection rate of groups PBS ,CT, 26695 and 8-1 was 0%, 0%, 40%. 60% (Table 2). CagPAI positive strain ATCC26695 and mutant strain 8-1 companied with mucous membrane adjuvant choleratoxin prevented H pylori from growing in the stomach of mice. There was no difference between the CagPAI positive strain and CagPAI negative strain. We found that full-protect rate of the two H pylori immune group was only 20% or so. It was found that immune was apparently decrease in semi-quantitative counting. No obvious difference was found between groups, and CT grouphad no prevention effect. The result is displayed in Figure 4.

Comparing with PBS control, the CT control number of spleen cells was slightly increased, but that of two H pylori antigen-immune groups was greatly increased. The number of CagPAI mutant strains was more obvious. Compared with the two groups, no difference was found, (P < 0.05, Figure 5). 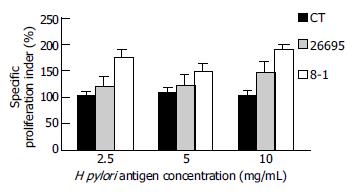 CagA is cytotoxin correlative protein, which is one of H pylori nosogenetic factors. The PAI is regarded as one of the signs of H pylori infection. Early researches found that this positive sign was higher in peptic ulcer and gastric carcinoma than in gastritis. For example, foreign reseachers found that anti-CagPAI in serum was positive in 93% of the gastric carcinoma patients[2], it is different in Asian-Pacitic area, the positive ratio of the bacterial strain was much higher. A large number of reports approved that the pathogenicity of CagA (+) was stronger than that of CagA (-), inducing the production of IL-8 and GRO-α, ENA78 could produce and activated related nucleic transcription factors[3]. Few reports about comparson of wildtype strain isogenic mutant strain in vitro were available. We studied three pairs of cagPAI wildtype strain and cagPAI gene-knockout mutant strain constructed by Dr. Bery. No difference was found between the growing speed and activity of the two strains.

Therer were many gene produces concerned with H pylori adherence, including NLBH, porins, BabA etc[4-9]. Our study showed that there was no difference in adherence to the epithelia of stomach between cagPAI (+) strain and cagPAI (-) strain.

CagPAI (+) strain could cause apoposis and proliferation in stomach epithelia[10]. However, it was proved by ELISA in our research that in vitro cagPAI was not concerned with apoptosis-induced ability, which did agree with the result of Le’Negrate. They found that cagE in cagPAI participated in the prosess of Fas-induced H pylori causing stomach epithelial apoptosis due to different the strain. we chose two stains in three pairs of strains, so the result was probably accurate.

In the immune prevention of H pylori infection, it was reported that cagA could prevent infection of the cagPAI (+). In our research, SS1 strain which was used to infect animals was cag (+) strain, but we found that there was no difference in preventive effect between cagPAI (+) strain and mutant strain. Although there was no statistical difference, mutant stain had a higher protective trend. It showed that the immune prevention was not caused by protein coded by cagPAI. We do not support regarding cagPAI gene product is immune antigen of H pylori bacterin.

Cellular immunity, especially CD4+T cellular immunity is a very important mechanism , which can help B cells produce sIgA. We selected the spleen cell proliferation test as the target in immune. Because B cells could not live in vitro, the proliferation cells were mainly T cells. Both cagPAI (+) and cagPAI (-) strain were stimulated to proliferate T cells, indicating that some special T cells clones are existed in spleen cells. The number of cagPAI mutant strains is more than that of cagPAI (+) strains, agreeing with the histology.

The effect of cagPAI on H pylori immune and pathogenesis is very complex and needs further study.