Fasciola hepatica, an endemic parasite in Turkey, is still a very rare cause of cholestasis worldwide. Through ingestion of contaminated water plants like watercress, humans can become the definitive host of this parasite. Cholestatic symptoms may be sudden but in some cases they may be preceeded by a long period of fever, eosinophilia and vague gastrointestinal symptoms. We report a woman with cholangitis symptoms of sudden onset which was proved to be due to Fasciola hepatica infestation by an endoscopic retrograde cholangiography.

A 40-year old woman with no prior complaints was admitted to our emergency unit due to fever, chills, nausea, vomiting and persistent right-upper quadrant pain for one week. She was born at the East of Turkey and in her medical history she had a cesarean section five years ago and was operated for inguinal hernia one year ago. She was a non-smoker and had no prior medication.

On her physical examination, she was pale but not jaundiced and had a body temperature of 36.8 °C. She was normotensive with a regular pulse of 92 per minute. She had a mild mid-systolic murmur on the aortic valve, but no additional pathologic heart sounds or murmurs on major arteries were noted. All peripheric pulses were palpable. Auscultation of the lungs revealed no pathology. She had a cesarean section incision and another right lower quadrant incision due to hernia repair. Her bowel sounds were hyperactive on auscultation of the abdomen and she had a prominent right subcostal tenderness, but no liver or spleen enlargements were noted on palpation.

A chest x-ray and plain abdominal radiograph revealed no pathology. In suspicion of gallstone disease, an ultrasonographic examination was performed and it showed a normal liver parenchyma but two hyperechogen solid lesions measuring 9 mm×9 mm and 7 mm×8 mm in the 7 th segment of the right lobe. The gallbladder wall was normal but besides sludge multiple, milimetric, intraluminal echogenic particles were noted. Intrahepatic bile ducts were normal but there was a slight enlargement of the common bile duct (11 mm).

Still in suspecion of cholangitis due to gallstone, ceftriaxone 2 g/d i.v. was empirically started and the patient was referred to our endoscopy unit for endoscopic retrograde cholangiopan-creatography (ERCP). After its selective cannulation, the common bile duct was filled with contrast agent and a slight enlargement and multiple, mobile, oval shaped filling defects were noted. Intrahepatic bile ducts were proved to be normal (Figure 1). After sphincterotomy, balloon extraction was performed and five Fasciola hepatica worms were noted. All of them were captured and taken out via a dormia basket (Figure 2, Figure 3). After this interesting finding the patient’s stool examination disclosed the parasites’ ova (Figure 4) and an indirect hemaglutination test proved to be positive in 1/1320 titer. 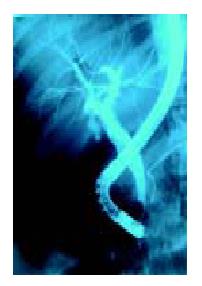 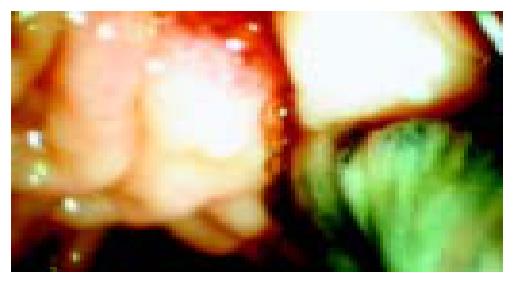 Figure 2 Fasciola hepatica next to papilla of Vater after sphinc-terotomy and balloon extraction. 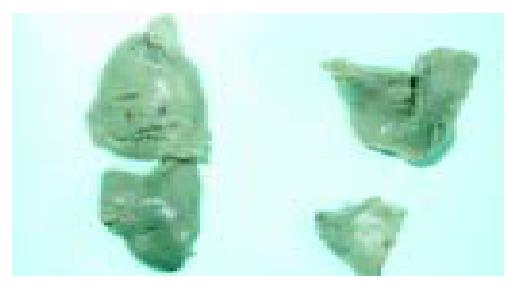 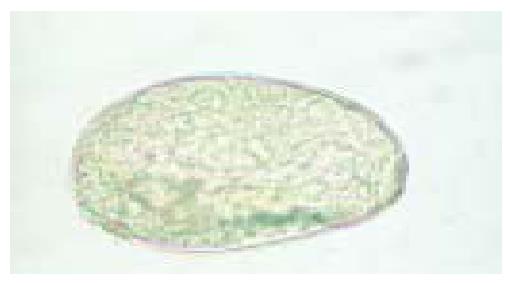 After extraction of the worms the patient’s symptoms rapidly regressed and her liver enzymes returned to normal levels, then she was put on bithionol treatment 30 mg/kg every other day for 15 doses.

A variety of liver flukes, including Fasciola hepatica may colonize the biliary tree where they lay their eggs, which can give rise to the formation of gallstones by serving as nidus for them. Living or dead worms may occlude the bile ducts causing obstruction and sometimes cholangitis.

Fascioliasis is primarily a common disease of livestock animals as cattle and sheep with humans serving only occasionally as accidental hosts. This zoonotic disease is common in Africa, Western Europe and Latin America[1]. In a recent study from the East of Turkey, its seroprevalance was reported to be 2.78% independent of age, educational and socioeconomical status[2].

Two stages have been described in human fascioliasis, namely an acute phase which coincides with hepatic invasion and a chronic phase due to the presence of flukes in the bile ducts[3]. The metasercariae for this parasite encyst on freshwater plants such as wild watercress and human consumption of aquatic plants harvested from contaminated areas lead to infection. Then developing larvae penetrate the gut wall and enter the peritoneal cavity. After a period of migration for 6 to 9 wk, the young flukes penetrate the capsule of the liver and they mature in the biliary tree and begin to pass their eggs. In the acute phase, the patient may have prolonged fevers, right upper quadrant pain, liver enlargement and eosinophilia which can be easily misdiagnosed. These symptoms abate with the chronic phase. Once the flukes enter the bile ducts, they may cause symptoms due to cholestasis and cholangitis[4].

Although the definitive diag nosis for fascioliasis can be made by detecting the parasite eggs in stool or duodenal aspirates, egg detection rate is not so high because of the low egg production rate of the parasite. Immunoserological tests become the cornerstone for the diagnosis of fascioliasis especially in early stage or ectopic infections[5] but an ELISA test provides more rapid and reliable results[6].

Although some parts of our country are endemic areas for human fascioliasis, this diagnosis was not suspected prior to give its full term (ERCP) as it is still a very rare cause of biliary obstruction. As usual[7], sphincterotomy and balloon extraction rapidly alleviated symptoms in our patient.

Unlike other liver flukes, therapeutic failure was common in patients with Fasciola hepatica treated with piraziquantel so bithionol or triclabendazole has been the treatment of choice for this parasitic infection[8]. The use of bithionol with the recommended dose of 30-50 mg/kg every other day for 10-15 doses or repeated doses has resulted in cure of acute and prolonged fascioliasis[9]. Triclabendazole, another effective and safe drug for fascioliasis, has been found to be able to eradicate the parasite with a single oral dose of 10 mg/kg[10]. Our patient was put on bithionol treatment 30 mg/kg every other day for 15 doses and no major side effects were noted.

We report this patient to draw attention to the latter that fascioliasis should be kept in mind in patients with cholestasis and preceeding vague gastrointestinal symptoms especially in endemic areas of the world.