AIM: To explore the possibility of marrow mesenchymal stem cells (MSC) in vitro differentiating into functional islet-like cells and to test the diabetes therapeutic potency of Islet-like cells.

CONCLUSION: Islet-like functional cells can be differentiated from marrow mesenchymal stem cells, which may be a new procedure for clinical diabetes stem -cell therapy, these cells can control blood glucose level in diabetic rats. MSCs may play an important role in diabetes therapy by islet differentiation and transplantation.

Diabetic mellitus (DM), one of the leading causes of morbidity and mortality in many countries, is caused by an absolute insulin deficiency due to the destruction of insulin secreting pancreatic cells (type 1 DM) or by a relative insulin deficiency due to decreased insulin sensitivity, usually observed in overweight individuals (type 2 DM). In both types of the disease, an inadequate mass of functional islet cells is the major determinant for the onset of hyperglycemia and the development of overt diabetes. Islet transplantation has recently been shown to restore normoglycemia in type 1 DM[1]. However, a limited supply of human islet tissues prevents this therapy from being used in patients with type 1 DM. Alternatively, much effort has been made to increase β cell mass by stimulating endogenous regeneration of islets or in vitro differentiated islet-like cells[2-5]. Multipotent stem cells have been described within pancreatic islets and in nonendocrine compartments of the pancreas[6-12], and these cells have the capacity of differentiating into pancreatic islet-like structures. Furthermore, cells that do not reside within the pancreas, such as embryonic stem cells(ESC), hepatic oval cells, cells within spleen, have been differentiated into pancreatic endocrine hormone-producing cells in vitro and in vivo[13-21]. However, despite their differentiating potency, differentiation of various stem cells into islet cells has two major obstacles preventing clinical application: One is that these stem cells do not originate from DM patients, transplanting them would unavoidably be rejected by DM recipients. The other is that the source is not enough to provide abundant stem cells. The current article reports a potential means to generate insulin-producing cells, islet differentiation from bone marrow-derived stem cells. We suggest that cells within the adult bone marrow (mesenchymal stem cells MSC) are capable of differentiating into functional pancreatic β cell phenotypes.

Bone marrow was isolated from femoral bone under aseptic condition and dispersed into single cell suspension, L-DMEM cells were cultured in a density of 1 × 10 9/L at 37 °C, 50 mL/L CO2 for 48 h. Suspended cells were disposed and adherent cells were cultured in L-DMEM with 200 mL/L FCS for about 10 d, culture medium was changed at 3-d intervals. These cells were digested with 2.5 g/L trypse and passed for 2-3 generations when the confluence reached 70%-90%. Then, cells with 70%-80% confluence were induced to differentiate into functional pancreatic cells. Cells were pre-induced with 10 mmol/L nicotinamide and 1 mmol/L β -mercaptoethanol in L-DMEM for 24 h, and re-induced with 10 mmol/L nicatinomide and 1 mmol/L Mercaptoethanol in serum-free H-DMEM for another 10 h. Cells induced without nicotinamide or β -mercaptoethanol were used as controls.

The amounts of immunoreactive insulin in supernatants secreted from differentiated cells 48 h after treatment and cells 24 h before treatment were determined by RIA using a commercially available RIA kit according to the manufacturer’s instructions. Briefly, to each polypropylene RIA tube 100 μL each of anti-Insulin, 125I- insulin, and insulin or the samples were added. Immune complexes were precipitated 24 h later with 1 mL of 160 mL/L polyethylene glycol solution, and a gamma counter was used to determine the radioactivity in the precipitates. There was no nonspecific interference of the assay with the components of the samples. Determinations were carried out in triplicate and the means and standard deviations were obtained.

Diabetic animal models were made according to the standard procedure with modifications. Briefly, 10 Wistar rats (weighting about 200 grams) were intravenously injected with 50 mg/L streptozotocin (STZ) from caudal veins, and glucose levels were tested 1 week later with Roche ACCU-CHEK glucose tester. Two rats died and were excluded. After stable hyperglycemia level was achieved, 3 animals were subcutaneously injected with 5 × 10 6 differentiated cells, while 2 others received the same amount of un-differentiated cells, the remaining 1 did not receive any cells. One week after cell injection, animal glucose level was recorded.

Under inversed microscope, undifferentiated MSCs were typical of adherent spindle and fibrocyte- like. However, under differentiation, these spindle-like cells changed rapidly into round or oval types with confluence. These cells were abundant in endocrinal granules, similar to those differentiated islet cells from ES cells. These grape-like cells lasted for at least 2 wk (Figure 1). Some cells changed into neuron-like cells with typical processes. 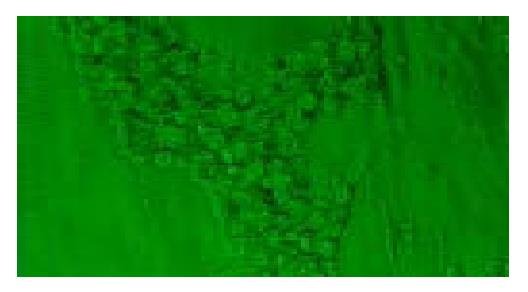 To assess insulin-1 mRNA expression in differentiated cells, RT-PCR was applied on MSCs shortly after bone marrow isolation (Neg), 24 h before nicotinamide and β -mercaptoethanol treatment (Pre), 48 h (Islet1) and 1week after Nicotinamide and β -mercaptoethanol treatment (Islet2). There were no pre-differentiated MSCs (Figure 2). However, 48 h after treatment, insulin-1 mRNA transcription could be detected and continued for at least 1 wk. Since we did not observe any pancreatic islet-like cells in control group, RT-PCR was not performed on this group of cells. 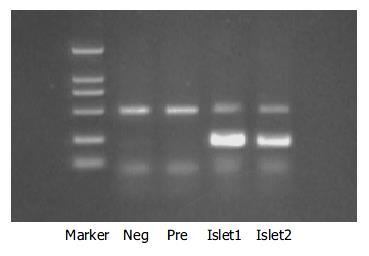 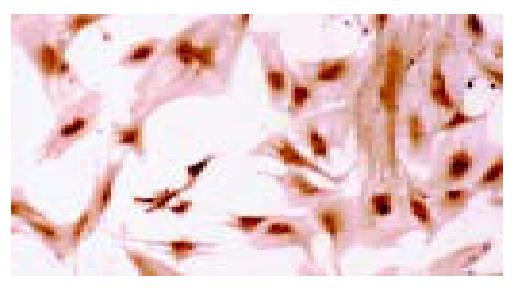 Multipotent stem cells within pancreas and outside could develop into insulin-secreting islet cells[7-21]. However, differentiation of various stem cells into islet cells has two major obstacles preventing clinical application. As these stem cells do not originate from DM patients, these cells transplanted would be rejected by DM recipients. The source is not enough to provide abundant stem cells.

Bone marrow mesenchymal cells (MSC) reside in bone marrow and are multipotent, and can differentiate into lineages of mesenchymal tissues, such as bone, cartilage, fat, tendon, muscle, adipocytes, chondrocytes, osteocytes[22-24]. MSCs could differentiate into endodermal and epidermal cells, such as vascular endothelial cells, neurocytes, lung cells and hepatocytes[25-27]. MSCs as differentiation donors are of advantages compared with other stem cells as ESC or stem cells from organs. MSCs are of great multiplication potency. Cell-doubling time is 48-72 h, and cells could be expanded in culture for more than 60 doublings[28]. Functional cells differentiated from MSCs transplanted into MSC donors (autologous transplantation) would not cause any rejection.

Bone marrow stem cells are non-endodermal cells with no immediate relationship to putative pancreatic stem cells that are resident in tissues of endodermal origin or developmental neuro-endocrine stem cells derived from the endoderm. Alternatively, stem cells in bone marrow may be derived from sites of endodermal origin. Regardless of their germ layer of origin, these cells represent multi-potent cells mediated by circulating signals, and can be recruited to neuro-endocrine compartments of the pancreas. Once homing of these cells to pancreatic islets has occurred, local cell-cell interaction as well as paracrine factors may initiate differentiation.

There was an argument[31] that Islet-like cells differentiated from ESC were falsely insulin positive from insulin-uptake. These insulin-positive cells which do not transcript insulin mRNA, are TUNEL +. Bone marrow cells could also fuse with other cells and adopt the phenotypes of these cells[32,33]. However, cell differentiation in our report was not the case. Islet cells expressed insulin at both mRNA and protein levels, the excreting insulin level was far more higher than that in culture media and that of pre-differentiated cells. Further more, these MSCs-derived cells could down-regulate glucose level in diabetic rats.

In conclusion, MSCs can differentiate into functional pancreatic islet-like cells in vitro. If human MSCs, especially MSCs from diabetes patients themselves can be isolated, proliferated, differentiated into functional pancreatic islet-like cells, and transplanted back into their donors (autologous transplantation), their high proliferation potency and rejection avoidance will provide one promising therapy for diabetes.