METHODS: Data were collected from 93 patients submitted to upper digestive endoscopy due to dyspeptic symptoms. The patients were either negative (group A) or positive (group B) to H pylori by means of both histological detection and urease tests. Before endoscopy, peripheral blood was collected for the investigation of anti-H pylori IgG and IgA antibodies. To perform the urease test, biopsies were obtained from the gastric antrum. For the histological evaluation, biopsies were collected from the gastric antrum (greater and lesser curvatures) and the gastric body. Following this, duodenal fluid was collected from the first and second portions of the duodenum. For the serological assaying of anti–H pylori IgG and IgA, and anti-H pylori IgA in duodenal fluids, the ELISA method was utilized.

CONCLUSION: The results of serum IgG and IgA tests for H pylori detection when used simultaneously, are more efficient in accuracy, sensitivity and negative predictive value, than those when used alone. The concentration of IgA antibodies in duodenal fluid is not useful in identifying patients with or without H pylori.

Knowledge about peptic ulcers has changed profoundly since Warren and Marshall[1] managed to cultivate Helicobacter pylori (H pylori) from gastric biopsies. This raised great interest in the study of how it colonized the upper gastrointestinal tract and more specifically, in its direct relationship with peptic disease[1-3].

In treatment of peptic diseases among H pylori-infected patients, local immune responses of the host, as well as the inherent factors of the microorganism, such as the presence of cytotoxin-associated gene A (cagA) were important[11,12]. Few studies have analyzed the effect of local immune response on diseases induced by H pylori[13,14].

H pylori infection could result in a major increase in cells secreting IgA in human gastroduodenal mucosa[15,16] and usually induce high serum levels of anti-H pylori antibodies. Moreover, significant concentrations of antibodies were demonstrated in saliva, gastric fluid and feces[17]. Despite the antibody response, this microorganism has been rarely eliminated from the stomach and when it was not treated adequately the infection generally persisted in the rest of an individual’s life[18].

However, the use of serological tests based on the determination of serum levels of anti-H pylori IgG and IgA antibodies to clinically diagnose H pylori infection has not yet been fully clarified[5,7,10,16].

Examinations were done on 93 patients with peptic symptoms from November 2000 to September 2001.

The inclusion criteria were: adult patients with a normal endoscopic examination or showing a peptic disease[19,20]. The followings were considered to be exclusion criteria: presence of malignant disease of the upper digestive tract, previous gastrectomy, use of hormonal or non-hormonal anti-inflammatory medications, proton pump inhibitors, histamine H2 receptor blockers or antibiotics or antacids over the past twelve months, previous treatment for the elimination of H pylori over the past twelve months, presence of intestinal inflammatory disease or immunodeficiency of any nature, and pediatric age.

Processing of biopsy material The material collected from the gastric biopsies was placed in flasks containing 40 g/L buffered formaldehyde for fixation and then sent for histological examination. Slides were stained with hematoxylin and eosin and the modified Giemsa method (1% Lugol’s solution and 25 g/L gentian violet solution). The four biopsy fragments removed from the gastric antrum were placed in flasks containing urease medium (Probac, Sao Paulo, Brazil), with 2 mL of solution in each. The flasks were maintained at 37 °C and read by the main author 6 and 12 h later.

ELISA method (Accubind®, Monobind, Inc., Costa Mesa, California, USA) was used to determine the levels of serum anti-H pylori IgG and IgA and anti-H pylori IgA in the duodenal fluid. The serum samples were diluted to 1/100 while the samples of duodenal fluids were diluted to 1/1000. Other steps were performed according to the instructions of manufacturer.

For both the anti-H pylori IgG and IgA serum antibodies, optical density values greater than 20 U/mL were considered as positive results. For the anti-H pylori IgA antibodies in the duodenal fluid, no reference optical density value for a positive or negative test was available. Thus, a receiver operating characteristic (ROC) curve was constructed, taking the results obtained in ELISA test versus the gold standard.

Statistical analysis was performed by the Mann-Whitney, Fisher’s exact and Kruskal-Wallis tests. The ROC curve was constructed in order to assess the sensitivity and specificity of anti-H pylori IgA assays in the duodenal fluid at different cutoff levels. An alpha value less than or equal to 5% was adopted for rejection of the null hypothesis. The results were expressed as mean ± SD to illustrate the distribution of variables.

Value of serum tests for diagnosis of H pylori infection

In comparison between the values obtained in the ELISA tests in patients positive or negative for H pylori, the difference was significant in relation to anti-H pylori serological IgA and IgG.

Sensitivity, specificity and false positive ratio for IgA in the duodenal fluid were defined by the ROC curve at different cutoff levels, as compared to the gold standard (Figure 1). 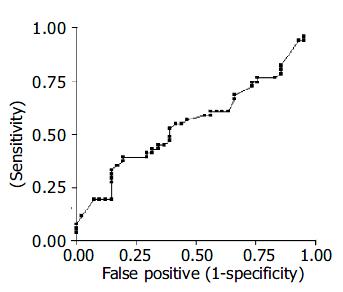 Figure 1 Sensitivity and specificity of anti-H pylori IgA in duodenal fluid for diagnosis of infection determined by ROC curve.

When values obtained in the ELISA test for determination of anti-H pylori IgA antibodies in the duodenal fluids were analyzed, no significant difference (P = 0.43) was observed between the patients with or without H pylori infection.

Martin-de-Argila et al[21] concluded that ELISA serum test for the detection of anti-H pylori IgA and IgG antibodies was sensitive and specific and should preferentially be utilized in population-based studies. Peura[22] found that the sensitivity and specificity of ELISA test ranged from 75% to 95%. Perez-Perez et al[23], examined the detection of anti-H pylori IgA and IgG in serological samples from patients with positive cultures for H pylori and a histological diagnosis of gastritis, and verified that tests using both antibodies simultaneously had a sensitivity of 93.1% and a specificity of 94.4%. In our study, if the serological tests were considered together, the sensitivity was 86.6% and specificity was 74.2%. A possible explanation for this difference could be the different methods utilized as the gold standard. Indeed, the H pylori culture method performed by those authors could possibly have revealed smaller quantities of bacteria in the gastric mucosa. With few bacteria in the mucosa, the urease test and histology could give a false negative result.

Our results also pointed to an increased sensitivity when both anti-H pylori IgG and IgA were considered together, in relation to IgG or IgA alone, but the improvement in specificity occurred only in relation to IgA, and it was reduced in comparison with IgG alone. The association between IgG and IgA resulted in a marked improvement of the negative predictive value in comparison with the two assays alone, but did not offer advantages in relation to the positive predictive value.

Certainly, other variables than these might be responsible for the differences observed between the various studies, such as the severity and staging of peptic disease and the different strains of microorganism might also play a role. Strains with cytotoxin-associated gene A (cagA) exhibited more intense immunological responses[11,16,23,24].

Watanabe et al[14], found that patients who presented high titers of anti-H pylori IgA in the gastric secretion presented a lower degree of neutrophilic infiltration on histological examination. These results suggest that anti-H pylori IgA antibodies have a protective function, even though this is insufficient to completely eliminate the organism.

In conclusion, the results from the present investigation demonstrate that anti-H pylori IgA and IgG serum immunoglobulins are useful in distinguishing between patients with and without H pylori infection, whereas the concentration of anti-H pylori IgA in the duodenal fluid is not useful in identification of infected or uninfected patients.