AIM: To investigate the signal pathway of honokiol-induced apoptosis on human colorectal carcinoma RKO cells and to evaluate whether p53 and p53-related genes were involved in honokiol-treated RKO cells.

METHODS: Cell cycle distribution and subdiploid peak were analyzed with a flow cytometer and DNA fragment with electrophoresis on agarose gels. Transcriptional level of Bax, Bcl- 2, Bid and Bcl-xl was accessed by RT-PCR. Western blotting was used to measure p53 protein expression and other factors related to apoptosis. Proliferation inhibition of two cell lines (RKO, SW480) with high expression of p53 and one cell line with p53 negative expression (LS180) was monitored by MTT assay.

RESULTS: Honokiol induced RKO cell apoptosis in a dose-dependent manner. The mRNA expression level and protein level of Bid were up -regulated while that of Bcl-xl was down-regulated, but no changes in Bax and Bcl-2 were observed. Western blotting showed p53 expression had no remarkable changes in honokiol-induced RKO cell apoptosis. LS180 cells treated with honokiol exhibited apparent growth inhibition like RKO cells and Sw480 cells.

Honokiol is a major active constituent extracted from the bark of Magnolia officianlis (Chinese name for Houpu) (Figure 1). It has a variety of pharmacological effects, such as anti-inflammatory[1], antithrombosis[2], anti-arrhythmic[3], antioxidant[4] and anxiolytic effects[5]. Recently, honokiol has been reported to exhibit a potent cytotoxic activity by inducing cell apoptosis in some cell lines[6-8] . Honokiol-triggered apoptotic process is accompanied with down- modulation of Bcl-XL, release of mitochondrial cytochrome C in CH27 cells[9]. 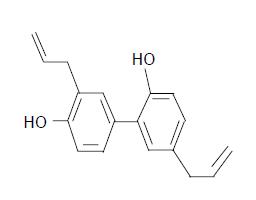 Cells undergoing apoptosis are characterized by distinct biochemical and morphological changes. Many of the biochemical and morphological events of apoptosis are a direct result of caspase-mediated cleavage of specific substrates[10,11]. Together with caspase, Bcl-2 family is involved in inducing cell apoptosis and identified as essential components of the intracellular apoptotic signaling pathways. Cell viability versus death is determined by the relative abundance of various members of the Bcl-2 family, acting in concert with other proteins in the death pathway[12,13].

In many tumor cells, wild-type p53 is considered to participate in apoptosis in response to DNA damage[14]. P53 may transactivate apoptotic regulators, such as Bcl-2[15-17] and Bax[18,19]. Recent studies have shown that p53 plays a role in apoptosis by the mitochondrial-mediated apoptotic pathway[20]. Activation of p53 upregulates Bax[19] and increases the ratio of Bax:Bcl-2, releases cytochrome C and other polypeptides from the intermembrane space of mitochondria into cytoplasm. Cytochrome C activates caspase cascade[12,13].

RPMI 1640 medium was obtained from Gibco BRL. Newborn bovine serum was supplied by Sijiqing Biotechnology Co. (Hangzhou, China). Monoclonal antibodies to Bax, Bcl-xl, Bid, Bcl-2, β -actin and p53 were purchased from NeoMarkers, Fremont, CA, USA. Honokiol was got from the National Institute for Pharmaceutical and Biological Products, Beijing, China. The drug was dissolved in DMSO with the stock concentration of 10 mg/mL. It was further diluted in culture medium with the final DMSO concentration <1%. 3-(4, 5-dimethylthiazol-2-yl)-2, 5-diphenyltetrazolium bromide (MTT) and propidium iodide (PI) were purchased from Sigma Chemical Corporation, USA.

To detect DNA fragments, RKO cells were collected and lysed with lysis buffer containing 50 mmol/L Tris-HCl (pH 7.5), 20 mmol/L EDTA, and 10 g/L NP-40. Then 10 g/L SDS and RNase (5 µg/mL) were added to the supernatants, and incubated at 56 °C for 2 h, followed by incubation with proteinase K (2.5 µg/mL) at 37 °C for 2 h. After DNA was precipitated by addition of both ammonium acetate (3.3 mol/L) and ethanol (995 mL/L) dissolved in a loading buffer, DNA fragmentation was detected by electrophoresis on 15 g/L agarose gels and visualized with ethidium bromide staining.

Honokiol-treated RKO cells (5, 10, 15 µg/mL) and vehicle were fixed with 700 mL/L alcohol for 15 min at 4 °C, then stained with 1.0 µg/mL propidium iodide (PI, Sigma, USA). The red fluorescence of DNA-bound PI in individual cells was measured at 488 nm with a FACSCalibur (Becton Dickinson, USA) and the results were analyzed using ModFit 3.0 software. Ten thousand events were analyzed for each sample.

RKO cells 1 × 105 were seeded on 24-well plate. After 24-h culture, cells were treated with 5, 10 µg/mL honokiol and vehicle for 48 h. Total RNA from RKO cells was extracted using Trizol (Invitrogen, USA). In RT-PCR, cDNA synthesis was performed using a RNA PCR kit (TaKaRA Biomedicals, Osaka, Japan) with the supplied oligo dT primer (Table 1). Reverse transcription was performed using a thermal program of 92 °C for 2 min, then 38 cycles of annealing for 30 s at 55 °C, extension for 90 s at 72 °C. As an internal control, semiquantitative analysis of β -actin was also amplified. This primer pair of β -actin had an optimal annealing temperature of 55 °C with 20 cycles and yielded a 350-bp PCR product. Samples were separated on 20 g/L agarose gel and visualized with ethidium bromide staining under UV light.

RKO cells, SW480 and LS180 cells (1 × 104 in 100 µL) were seeded on 96-well plates in triplicate respectively. Following a 24-h culture at 37 °C, the medium was replaced with fresh medium containing vehicle control or various concentrations of honokiol in a final volume of 200 µL. Cells were incubated at 37 °C for 68 h. Then 50 µL of MTT (2 mg/mL in PBS) was added to each well, incubated for an additional 4 h, the plate was centrifuged at 1 000 r/min for 10 min, then the medium was removed. The MTT formazan precipitate was dissolved in 100 µL DMSO, shaken mechanically for 10 min and then read immediately at 570 nm by a plate reader (Opsys MR, Denex Technology, USA).

Statistical significance was determined by Student’s t-test. A P value of 0.05 or less was considered significant.

In honokiol-treated RKO cells, a degradation of chromosomal DNA into small internucleosomal fragments was evidenced by the formation of 180-200 bp DNA ladder on agarose gels (Figure 2), hallmark of cells undergoing apoptosis. No DNA ladders were detected in the samples isolated from control cultures. These results indicated that honokiol induced an apoptotic cell death in RKO cells 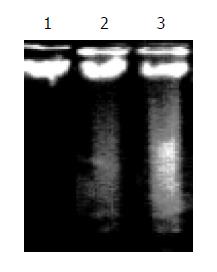 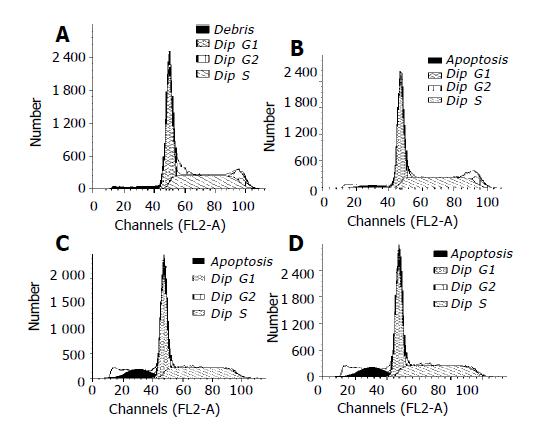 p53 and p53-related gene were found to be importantly involved in apoptosis induced by many agents. To study their role in honokiol-treated RKO, we monitored Bax, Bcl-2, Bcl-xl, Bid and p53 protein levels. Results in Figure 5 shows that no significant changes of Bax, Bcl-2 and p53 were found compared with vehicle. The level of Bcl-xl was decreased to vehicle level, while the level of Bid was increased remarkably after treated with 5 and 10 µg/mL honokiol respectively. The protein levels were measured by quantitative Western blot analysis after normalized with β -actin content.

RKO cells had positively expressed of high wild-type p53 and SW480 cells had positive expression of high mutant p53, while LS180 had negative p53 antigen expression[20-22]. Cells treated with various concentrations of honokiol resulted in a dose- dependent cytotoxicity in three cells. As shown in Figure 6, honokiol-treated LS180 exhibited apparent growth inhibition like RKO cells and Sw480. Honokiol -mediated cytotoxicity occurred at the concentration of 5 µg/mL and above. A significant decrease in cell number was seen at 10 µg/mL. The concentration leading to a 50% decrease in cell number (IC50) was approximate 10.33, 12.98, 11.16 µg/mL in RKO, SW480 and LS180 cells respectively. 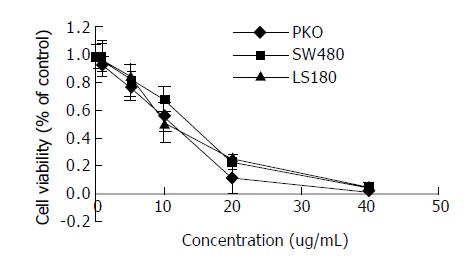 p53 is a crucial protein in cellular stress response. p53-dependent arrest of cells in the G1 phase of the cell cycle was an important component of the cellular response to stress[23]. Wild-type p53 was considered to participate in apoptosis in response to DNA damage in many tumor cells[14,24]. When cells received UV or ionizing radiation and were exposed to anticancer drugs, p53 protein was accumulated[25,26]. The increased p53 could transactivate its downstream target genes to induce cell cycle arrest, DNA repair, and apoptosis[27,28]. p53-dependent apoptosis was also observed in vivo[29]. However, p53-independent apoptotic cascades after administration of anticancer drugs or r-irradiation have been described.

In the present study, honokiol-treated RKO cells could induce apoptosis in a concentration- dependent manner, with the ratio of G1 phase increased. The agent also caused an increase of the expression of caspase-3 and caspase-7 in a dose-dependent manner, did not cause the significant increase of caspase-9 (data not shown). In CH27 cells it promoted to release cytochrome C and activate caspase 3[9].

p53-dependent apoptosis was activated by the Bax/ mitochondrial/caspase-9 pathway. Bcl-2 and Bax expression were regulated by p53 both in vitro and in vivo, and Bax was a direct target of p53 transcriptional activation[30]. Bax, a proapoptotic member of the Bcl-2 family, was located in the outer membrane of mitochondria[25]. Increased in the ratio of Bax/Bcl-2 could cause changes in the membrane potential of mitochondria, consequently, cytochrome C and other polypeptides were released from the intermembrane space of mitochondria into cytoplasm. Once released, cytochrome C could activate procaspase-9 by self-cleavage[12,13] and then other caspases[12].

According to previous data, honokiol led to cell G1 arrest and cytochrome C release like p53. Thus it is necessary to evaluate the mRNA and protein expression of Bax and Bcl-2. Our results showed that honokiol-induced apoptosis of RKO cells was accompanied with up- regulation of Bid and down-modulation of Bcl-xl, but did not involve the regulation of Bcl-2 or Bax protein expression. Since pro-apoptotic Bax is a p53 downstream target, the lack of change of Bax and Bcl-xl supports the view that honokiol probably does not trigger the p53/Bax-mediated apoptosis pathway. Next we examined the expression of p53 in honokiol-treated RKO cells. We found that no significant change of p53 was observed (Figure 5). Finally we analyzed honokiol-induced apoptosis of the three cells with different p53 expression. Our data showed that honokiol-treated LS180 and SW480 cells exhibited apparent growth inhibition like RKO cells.

These results suggest that honokiol-induced caspase activation and cell apoptosis are entirely controlled by the p53-independent pathway.