METHODS: HSCs were isolated from Sprague Dawley (SD) rats by in situ perfusion and density gradient centrifugation. After several passages, the mRNA expression of 5 subtypes of SSTRs were assessed by reverse transcription-polymerase chain reaction (RT-PCR). HSCs were planted on coverslip and co-cultured with octreotide tagged by FITC. Then the distribution of FITC fluorescence was observed under laser scanning confocal microscope (LSCM) in 12-24 h.

RESULTS: There were mRNA expression of SSTR2, SSTR3 and SSTR5 but not SSTR1 and SSTR4 in SD rat HSCs. The mRNA expression level of SSTR2 was significantly higher than that of other subtypes (P < 0.01). FITC fluorescence of octreotide was clearly observed on the surface and in the cytoplasm, but not in the nuclei of HSCs under LSCM.

CONCLUSION: The effect exerted by somatostatin and its analogues on HSCs may mainly depend on the expression of SSTR2, SSTR3 and SSTR5. Octreotide can perfectly combine with HSCs, and thereby exerts its biological activity on regulating the characters of active HSCs. This provides a potential prevention and management against liver fibrosis.

In recent years, it has become clear that HSCs play an important role during occurence and progress of hepatic fibrosis and portal hypertension[1,2]. HSCs are located in a perisinusoidal orientation within the sinusoid and encircle vascular endothelial cells. They can also contract or relax in response to various vasoactive mediators. All of these suggest that these cells may have the capacity to modulate intrahepatic vascular resistance and blood flow at the sinusoidal level[3]. When HSCs are activated and proliferated abundantly, they can excrete many kinds of cytokine related to fibrosis to promote synthesis and deposition of extracellular matrix (ECM)[4,5]. Therefore, how to reduce and inhibit activation and proliferation of HSCs has become a hot spot in the area of liver fibrosis research[6].

Somatostatin and its analogues have comprehensive inhibitory actions on proliferation of many kinds of cells and the capacity to induce apoptosis, so they have been applied in cancer biotherapy at the present time[7,8]. The biological base by which somatostatin exerts its actions is the existence of somatostatin receptors (SSTRs). SSTRs belong to G-protein-coupled receptors family and are located on cell membrane. Only after somatostatin combines with SSTRs, could it exert the actions of anti-proliferation. Up to date, five different SSTR subtypes, termed SSTR1 to SSTR5, have been cloned and characterized[9].

In this research, we studied the mRNA expression and distribution of somatostatin receptors in hepatic stellate cells (HSCs) of rats to elucidate the mechanism by which somatostatin and its analogue exert the influence on liver fibrosis.

Adult male Sprague Dawley rats (450 ± 50) g were treated in accordance with the institution’s guidelines for the care and use of laboratory animals in research. All procedures were performed with animals under ether anesthesia. According to the method of Geerts and Weng et al[10,11], HSCs were isolated by in situ perfusion and density gradient centrifugation with nycodenz. Firstly, the trochar was inserted into the rat’s portal vein and the liver was perfused with pre-perfusion liquid. Then the liver was removed from the body and continuously perfused with perfusion liquid containing collagenase IV to digest the extracellular matrix. After centrifugation with 150 g/L nycodenze, the cells located in the interface were extracted and cultured in DMEM containing 200 mL/L FBS. HSC were fully stick to the wall within 48 h. Then the culture medium was exchanged in every 2-3 d. The identification of HSC was performed by observation of ultraviolet-excited fluorescence of vitamine A lipid droplet in HSC and immunocytochemical stain for desmin and GFAP.

Total RNA was isolated from HSC with Trizol by phenol-chloroform extraction and isopropanol precipitation following manufacturer’s instructions. Reverse transcription of total RNA was carried out according to the instructions of the RT kit. Design of specific primers against rat SSTRs sequences was refered to the references[12] and verified in NCBI Blast. They are shown in Table 1. The PCR system (total 25 μL) contained 40 pmo1/L primers of SSTRs or β-actin, 0.5 μL of 10 mmol/L dNTPs, 1.5 μL of 50 mmol/L MgCl2, 2 μL of cDNA, 2.5 μL of 10 × PCR buffer, 2.5 μL of Taq DNA polymerase. The PCR conditions included an initial denaturation for 5 min at 94 °C; 40 amplification cycles consisting of denaturation at 94 °C for 1 min, primer annealing at 60 °C for 1 min and elongation at 72 °C for 1 min; and a final extension at 72 °C for 7 min. The PCR products or DNA marker mixed with 2 μL of loading buffer were electrophoresed on a 15 g/L agarose gel and visualized under ultraviolet light excitation. Then the images were taken and anlaylized by Kodak digital camera and science software (Kodak, EDAS290, U.S.A). The expression of SSTRs was calculated by determining the ratio of SSTRs relative to β-actin.

After 3-4 passages, HSCs were planted on coverslip and culture medium was exchanged after sticking to the walls. Then octreotide tagged by FITC was added into the culture medium (10 μg/mL). After 24 h, the culture medium was removed and the coverslips were rinsed three times with PBS, whereafter the distribution of FITC fluorescence in live HSCs was observed by laser scanning confocal microscope (LSCM).

The results of electrophoresis of PCR products were expressed as mean ± SD and analyzed by t-test and analysis of variance.

The green fluorescence of FITC had an extensive distribution on the surface of HSCs and also in cytoplasm, but not in nucleus (Figure 4). 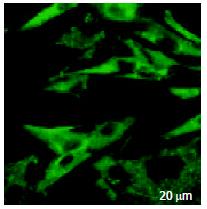 Several studies have demonstrated that somatostatin could restrain and decrease the process of hepatic fibrosis of rat liver cirrhosis models[14-16]. In addition, researchers studied the anti-fibrosis mechanisms of somatostatin. Reynaert et al[13] proved that somatostatin could suppress rat hepatic stellate cell contraction induced by endothelin-1. Chatterjee et al[17] found that in rat liver cirrhosis models of schistosomiasis, somatostatin might have the direct anti-fibrosis effects through modulating the synthesis and expression of collagen I, III and smooth muscle actin (SMA) of rat HSCs. All of these findings suggest that there are SSTRs on the surface of HSCs, thereby somatostatin could exert its actions on HSCs.

Whether SSTRs exist and what kind of SSTRs subtypes are expressed in rat HSCs We observed mRNA expression of SSTR2, SSTR3 and SSTR5, but not of SSTR1 and SSTR4 in Sprague Dawley rat HSCs. Our results slightly differed from Reynaert et al[13] that SSTR1, SSTR2 and SSTR3 were expressed, but not SSTR4 and SSTR5 in Wistar rat HSCs. Besides, we found that the mRNA level of SSTR2 was significantly higher than those of other subtypes in quantity. These results suggest that theoretically, somatostatin may be available to exert its inhibitive and pre-appoptosis actions on active HSCs by means of SSTRs (especially SSTR2) and consequently has the ability of anti-fibrotic action. Therefore, if the proper somatostatin analogues that have strong affinity to SSTR2, 3 and 5 are chosen, they will be able to exert better effect on active HSCs.

Taking advantage of the strong appetency by which somatostatin could combine with SSTRs, some researchers have applied the somatostatin analogues tagged by radioactive isotope to study the expression and distribution of SSTRs in cancer tissues and consequently the locational diagnosis of cancers. This kind of method has been proved to be satisfactory. Since our results showed that SSTR2, 3 and 5 were expressed and other studies reported that octreotide had the special affinity to SSTR2 and SSTR5[7,9], we treated HSCs with octreotide tagged by FITC. By means of the characteristics that hormones can specially bind to its receptors, we observed the green fluorescence on the surface of live HSCs, which reflected the distribution of SSTRs. This proves that octreotide has strong affinity with HSCs and thus the existence of SSTRs is supported. Meanwhile, we also observed the distribution of octreotide in the cytoplasm, but not in the nuclei of HSCs. In general, octreotide contains 8 peptides, so it can’t pass through the cell membrane without other pathways were introduced. Thereby, we presume that the endocytosis conducted by the receptors may works. But whether octreotide in cytoplasm is able to exert its biological actions by a certain mechanism independent of SSTRs remains to be confirmed in the future.

In conclusion, we demonstrates that SSTR2, 3 and 5 are obviously expressed in SD rat HSCs. In addition, octreotide, a somatostatin analogue, is able to combine perfectly with HSCs and thereby exerts its biological actions on liver fibrosis in clinical practice.