AIM: To evaluate the hepatic function in patients with severe acute respiratory syndrome (SARS) and possible causes of hepatic disorder in these patients.

RESULTS: Of the 182 patients, 128 (70.3%) had abnormal ALT activity, 57 (31.3%) had abnormal AST activity and 87 (47.8%) had abnormal LDH activity. The peak of elevated hepatic enzyme activities occurred between the sixth day and the tenth day after the first day of reported fever. Of the 182 patients, 160 (87.9%) had been treated with antibiotics, 137 (75.2%) with Ribavirin, and 115 (63.2%) with methylpredisolone. There was no statistically significant correlation between the duration of Ribavirin treatement and hepatic dysfunction.

CONCLUSION: Abnormal liver functions were common in patients with SARS and could be associated with virus replication in the liver.

Severe acute respiratory syndrome (SARS) or so-called atypical pneumonia with unknown etiology started to appear in Guangdong Province, China in November 2002 and quickly spread to other parts of China and around the world[1,2-4]. A novel coronaviruses has been identified as the etiological agent of the syndrome[5-8]. Most coronaviruses may cause either a respiratory or an enteric change. During the outbreak of SARS, abnormal hepatic enzyme activity was reported in patients of Toronto area, Canada[9]. The present study summarized the hepatic enzyme activities in patients with SARS who were treated at the China-Japan Friendship Hospital, Beijing, which started to receive patients with SARS in mid-March 2003, and was designated as one of the three hospitals in Beijing to treat patients with SARS in April 2003.

Our study included all patients who received a diagnosis of SARS with no pre-existing live diseases and were treated at the China-Japan Friendship Hospital between March 10 and May 31, 2003, and excluded such patients with a history of liver disorders. According to the criteria for SARS that have been established by the Ministry of Health, China-Clinical Diagnostic Criteria for Severe Acute Respiratory Syndrome[10], our case definition was a fever (temperature > 38 °C), a chest radiograph of the thorax showing evidence of consolidation with or without respiratory symptoms and a history of close contact with a person to whom SARS had been diagnosed. The diagnosis was confirmed by an indirect immunofluorescence assay with fetal rhesus kidney cells that were infected with coronavirus and fixed in acetone to detect a serological response to the virus[3] or by a positive viral culture. Patients in the study included 103 male and 79 female with age ranging from 11 to 86. The age distribution is shown in Table 1.

Hepatic functions included alanine aminopeptidase (ALT), aspartate aminotransferase (AST) and lactic dehydrogenase (LDH). We studied these variables from the first day of admission to May 31, 2003. The normal values of these enzymes were 0-40 U/L for ALT, 0-42 U/L for AST and 100-250 U/L for LDH.

We used univariate analysis to compare patients with normal and abnormal serum hepatic enzyme activities, and an unpaired Student’s t test, χ2 test, or Fisher’s exact test, as appropriate. We then performed multiple logistic regression analysis with stepwise analysis to identify independent predictors of the abnormality[3]. A P value of less than 0.05 was considered to indicate statistical significance. All probabilities are two tailed. Statistical analysis software StatView 5.0 for Macintosh OS was employed and data were reported as mean ± SD unless otherwise indicated.

Between March 10, and May 31, 2003, more than 100 of patients with SARS were admitted to the China-Japan Friendship Hospital; especially on May 8 a large number of patients with SARS were transferred to our hospital at severe stage and some patients were at convalescent stage. Serum samples were collected immediately after the patients were admitted to the hospital. The study included 103 male and 79 female patients from all ethnic background. The mean age was 40.42 years (range 15-78 years). 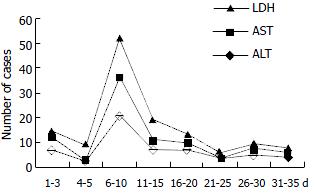 Figure 1 Abnormal-liver-function outcomes at different days.
Comparison of liver enzyme activities before and after hospital treatment

To explore whether hospital treatment could lead to abnormal liver enzyme activities in patients with SARS, we analyzed data of all patients who had normal or abnormal liver enzyme activities before and after hospital treatment. The deadline for entering analysis was June 15, 2003. Patients with hospital treatment less than 15 d were excluded from the study. As shown in Table 3, statistically significant difference was observed in AST and LDH (P < 0.01) while no significant difference was obtained in ALT.

Hospital treatment in 182 patients with SARS

Distribution of ribavirin treatment in 84 patients with SARS 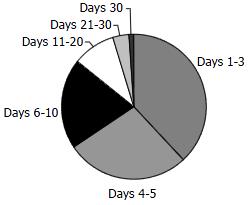 Abnormal liver enzyme activities could also be caused by coronavirus induced liver damage. Although liver biopsy was not feasible in these patients, pathological evaluation of the fatal cases revealed that hepatocytes underwent fatty degeneration, cloudy swelling, focal hemorrhage, apoptosis and dot necrosis, Kupffer cell proliferation, portal infiltration of lymphocytes and dispersive eosinophilic body in the liver[22,23]. There was an enlargement of the liver in 23 patients with SARS in our study observed by B-ultrasonic examination (data reported in another study). Because of difficulty in clinical practice, it was not documented whether pathological impairments of liver function and structure were present in the early stage of the disease. However, we have used herbal medicines and liver protective drugs in these patients. These treatments did not alter the outcome of abnormal liver enzyme activities. Therefore, it is unlikely that hospital treatment contributes to the outcome of abnormal liver enzyme activities in patients with SARS.

Our conclusions are that abnormal liver enzyme activities are common in patients with SARS and coronaviruses that cause severe acute respiratory syndrome might affect the liver and induce liver damage in the course of infection.