AIM: To determine the influence of gender on the clinicopathologic characteristics and survival of patients with hepatocellular carcinoma (HCC).

METHODS: A retrospective analysis of medical records was performed in 299 patients with HCC and their clinicopathologic features and survival were compared in relation to gender.

CONCLUSION: Female patients tend to have higher survival rates than males. These differences were probably due to more favorable pathologic features of HCC at initial diagnosis and greater likelihood to undergo curative therapy in female patients.

Hepatocellular carcinoma (HCC) is one of the most common cancers worldwide with a particularly high incidence in areas where chronic hepatitis B virus (HBV) and hepatitis C virus (HCV) are common[1,2]. These regions include sub-Saharan Africa, Far East and Southeast Asia where the annual rate is more than 30 cases per 100000 persons. In contrast, in low-incidence areas such as Europe and North America, the annual rate is less than 5 cases per 100000 persons[3]. In Thailand, where chronic HBV is endemic, it is estimated that more than 10000 new cases of HCC are diagnosed each year. Indeed, HCC represents the most common malignancy in Thai males and the third most common malignancy in females[4].

Previously, we demonstrated that HCC in Thailand had an indisputable male predominance, with a male-to-female ratio of approximately 6:1[5]. In fact, HCC is notably more prevalent in males worldwide, with reported male-to-female ratios ranging from 2:1 to 8:1 in most series. Until now, however, only a few studies have specifically compared the clinicopathologic characteristics of patients with HCC in relation to gender. In addition, the contribution of sex difference to patient survival and prognosis is controversial[6-13]. The aim of the present study was, therefore, to determine the influence of gender on clinicopathologic features and patient survival. In this respect, we analyzed the medical records on individuals in whom HCC was diagnosed during a four-year period at King Chulalongkorn Memorial Hospital (Bangkok, Thailand).

A total of 299 patients with HCC who were admitted to King Chulalongkorn Memorial Hospital between January 1996 and September 1999 were retrospectively analyzed and included in this study. All patients were diagnosed based on liver tumor characteristics detected by ultrasound/CT scan and confirmed by histology or serum alpha-fetoprotein (AFP) levels above 400 IU/mL. Of those, there were 260 male (87%) and 39 female patients (13%), making a male-to-female ratio of 6.7:1. We compared the difference and the clinicopathologic features, including age, biochemical liver function test, presence or absence of associated cirrhosis, etiologic factors predisposing towards HCC (alcohol abuse, hepatitis B or C), degree of tumor differentiation, gross pathology of tumor, tumor size, presence of vascular invasion, stage of HCC according to Okuda’s criteria, evidence of distant metastasis and modalities of therapy of HCC. In addition, the patients’ survival time for each group was also calculated, starting with the time of cancer diagnosis (including any incidence of perioperative mortality).

Gross pathology, tumor size, and localization of HCC as well as presence of portal or hepatic venous involvement, were obtained by abdominal ultrasound or computerized tomography (CT). In this study, the gross pathologic types of HCC were categorized according to Trevisani et al[14] as follows:nodular, multinodular, infiltrative, diffuse (the mass was not clearly defined and the boundary was indistinct) or massive type (a huge mass > 10 cm with the boundary not well defined).

Data were presented as percentage, mean and standard deviation. The Chi-square test and unpaired t test were used to assess the statistical significance of the difference between groups as appropriate. Survival curves were established using the Kaplan-Meier method and differences between curves were demonstrated using the log-rank test. The Cox regression analysis was performed to identify which independent factors have a significant influence on the overall survival. P values below 0.05 were considered statistically significant.

Table 2 demonstrates the clinicopathologic data of the patients at the time of the diagnosis of HCC. Female patients in this study tended to have less aggressive tumor characteristics than male patients. For instance, the mean tumor size in females (8.6 cm) was significantly smaller than that of male patients (11.6 cm) (P = 0.02). In addition, the nodular type of HCC appeared to be more frequently found among female patients, whereas the massive and diffuse types were more common among males (P = 0.01). Furthermore, the tumors in the female group tended to be of a less advanced stage according to Okuda’s criteria (P = 0.04) and less frequently associated with portal or hepatic vein invasion (P = 0.03). Nonetheless, no significant differences between groups were observed as to the degree of tumor differentiation, the prevalence of extrahepatic metastasis or ruptured HCC. 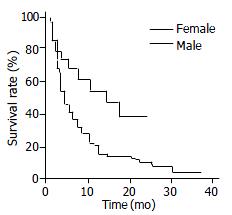 Figure 1 Overall survival of male and female patients with HCC.

Univariate analysis of the main variables was performed to determine significant risk factors associated with the overall survival. In addition to male sex, serum AFP levels > 400 IU/mL, Okuda’s stage II and III HCC, massive or diffuse types of tumors, tumor mass size over 5 cm in diameter, venous invasion and extrahepatic metastasis, and an unfavorable prognosis were observed in patients who did not receive any specific therapy for HCC. Stepwise Cox regression multivariate analysis revealed that high serum AFP levels, venous invasion, extrahepatic metastasis and absence of specific therapy were significantly and independently predictive for unfavorable prognosis (Table 3). Nonetheless, gender was not selected in the final analysis as an independent predictor of survival.

Various types of cancer occur more frequently in male than in female patients. Such is also the case with HCC. In fact, marked male predominance in HCC incidence is observed in both high- and low-risk areas, regardless of ethnic and geographic diversity[15]. Despite this, the exact reasons for sex difference in the incidence of HCC are unclear. It has been reported that DNA synthetic activities are higher in male than in female cirrhotics and this might be one of the possible explanations for the gender discrepancy in HCC[16]. However, in patients who had already developed HCC, a significant difference in tumor cellular proliferation between male and female patients was not detected[11]. It has also been suggested that the effect of sex hormones may contribute, at least in part, to the greater incidence of HCC observed in male patients. Although the mechanism remains to be elucidated, studies from animal models has implicated that the hormonal effect may be related to testosterone’s ability in enhancing transforming growth factor (TGF) alpha related hepatocarcinogenesis and hepatocyte proliferation[17].

Beside this, other possible factors contributing to the male predominance in HCC include the association with HBV infection, the higher proportion of male cirrhotics and differences in life-style habits, such as heavy alcohol consumption and smoking[6,10]. However, in this study, no significant difference was found between groups in the prevalence of associated cirrhosis. Likewise, although HBsAg carriers were slightly more common in males, this discrepancy did not reach statistical significance. Notably, this was also the case with the prevalence of chronic HCV infection in our study. In contrast, the prevalence of heavy alcohol consumption was significantly different, being higher in male than in female patients. Indeed, alcoholic cirrhosis has long been recognized as a risk factor for developing HCC, although its role in direct hepatocarcinogenesis is uncertain[18]. Nonetheless, it is reasonable to speculate that chronic alcohol abuse might accelerate cancer development in some cases with HBV- or HCV-associated cirrhosis and this may be partially responsible for the male preponderance of HCC in our series.

In addition, to confirm the marked male predominance, our study has demonstrated that male patients with HCC had a less favorable prognosis than females after initial diagnosis. Specifically, better survival in females was observed in those who had undergone surgical resection or treated with TACE. For untreated cases, the influence of gender on prognosis seemed to be limited since significant difference in survival between groups was not achieved, although there was a trend for females to survive longer. These results were consistent with previous reports in which a better prognosis was observed in females following hepatic resection[9-13]. For instance, according to the study in Japan by Nagasue et al[9], significantly better survival rates were found in females after 4 years of hepatic surgery. A previous report on Chinese patients by Cong et al[10] also demonstrated that the survival rates after surgery were approximately 50% and 25% in females and males, respectively. Likewise, a study in Hong Kong by Ng et al[11], indicated that females had a lower incidence of tumor recurrence following the surgical operations, with a median disease free survival of 19.5 mocompared with 4.5 mo for males. Recently, Lee et al[12] reported that female cirrhotics with HCC had 5-year disease survival rates after hepatic resection, which was higher than males (approximately 65% and 30%, respectively). Conversely, such favorable prognosis in females was not consistently observed among patients with inoperable tumors[6-8].

Thus, it could be speculated that the prognosis of HCC is not directly influenced by the sex of the patients. This is confirmed in our study that gender was not selected as an independent predictor of survival from the multivariate analysis. In fact, a better prognosis in females was probably attributed to a less advanced stage of HCC at initial diagnosis and, as a result, a higher proportion of cases was likely to undergo surgical resection or treated with TACE. In this study, for example, approximately 25% and 35% of female patients were treated with hepatic resection or TACE, respectively, while only approximately 10% and 15% of males were treated with such modalities. It has been generally recognized that hepatic resection is one of the most effective therapeutic modalities offering a hope of cure for patients with HCC[19,20]. Moreover, a non-surgical approach such as TACE appears to be beneficial in prolonging survival for some patients with unresectable tumors[21-22].

In addition to therapeutic factors, some pathobiologic features indicative of tumor invasiveness, such as venous involvement, appear to be significant factors influencing the survival of HCC[23]. It has also been demonstrated that the presence of venous invasion is associated with a higher intrahepatic recurrence rate after the resection of the tumor[24]. Although HCC is characterized by its propensity for vascular invasion, it is interesting that female patients with HCC had a much lower prevalence of venous involvement than males. It seems, therefore, that this is probably one of the main factors contributing to different survival rates between the two sexes in our study. Similarly, yet to be addressed, are the effects of other tumor pathologic features, such as tumor encapsulation during the disease-free period after surgical resection of HCC[25]. Previous data have demonstrated that females have a significantly higher prevalence of tumor encapsulation than males (80% and 45%, respectively). Furthermore, the tumors in females were frequently less invasive in terms of lower prevalence of tumor microsatellites and positive histological margin[11].

In conclusion, our data indicated that female patients with HCC had certain clinicopathologic features different from those in male patients. Moreover, females with HCC appeared to have better survival rates than males. This better prognosis in females was related to more favorable tumor characteristics such as a lower prevalence of hepatic or portal venous invasion and less advanced stages at initial diagnosis. As a result, female patients were more likely than male patients to undergo hepatic resection or to be treated with TACE.

We would like to express our gratitude to the Thailand Research Fund, Senior Research Scholar and the Molecular Biology Project, Chulalongkorn University for supporting the study. We also would like to thank Ms. Pisanee Saiklin for editing the manuscript.