AIM: To investigate the effects of probiotic on intestinal mucosae of patients with ulcerative colitis (UC), and to evaluate the role of probiotic in preventing the relapse of UC.

METHODS: Thirty patients received treatment with sulphasalazine (SASP) and glucocorticoid and then were randomly administered bifid triple viable capsule (BIFICO) (1.26 g/d), or an identical placebo (starch) for 8 wk. Fecal samples were collected for stool culture 2 wk before and after the randomized treatments. The patients were evaluated clinically, endoscopically and histologically after 2 mo of treatment or in case of relapse of UC. p65 and IκB expressions were determined by Western blot analysis. DNA-binding activity of NF-κB in colonic nuclear extracts was detected by electrophoretic mobility shift assay (EMSA). mRNA expressions of cytokines were identified by semi-quantitative assay, reverse transcriptase-polymerase chain reaction (RT-PCR).

RESULTS: Three patients (20%) in the BIFICO group had relapses during 2-mo follow-up period, compared with 14 (93.3%) in placebo group (P < 0.01). The concentration of fecal lactobacilli, bifidobacteria was significantly increased in BIFICO-treated group only (P < 0.01).The expressions of NF-κB p65 and DNA binding activity of NF-κB were significantly attenuated in the treatment group than that in control (P < 0.05). The mRNA expression of anti-inflammatory cytokines was elevated in comparison with the control group.

CONCLUSION: The probiotic could impede the activation of NF-κB, decrease the expressions of TNF-α and IL-1β and elevate the expression of IL-10. These results suggest that oral administration of this new probiotic preparation is effective in preventing flare-ups of chronic UC. It may become a prophylactic drug to decrease the relapse of UC.

Ulcerative colitis (UC) is a chronic disease and easy to relapse, its etiology and pathogenesis have not been definitively elaborated[1]. Primary therapy for UC is usually a combination of sulfasalazine and glucocorticoids. Sulfasalazine can be given alone or in combination with other drugs. However, a large number of patients are resistant or intolerant to sulfasalazine. Glucocorticoids suppress active inflammation very effectively, but its long-term use is associated with high rates of relapse and unacceptable toxicities. Recently, probiotic has been recommended to ameliorate the milieu of intestine and prolong the time of relapse[2-14]. This study intended to evaluate the role of bifidobacteria in remission of UC.

Thirty active UC patients were recruited for this study from 2001 to 2002 at Nanfang Hospital. Severity of the disease in colon and rectum was assessed by one gastroenterologist with an endoscope. These patients on sulphasalazine (SASP) and glucocorticoid had clinical and endoscopic remission and were randomized to receive either bifid triple viable capsule (BIFICO) (1.26 g/d), or an identical placebo (starch) for 8 wk. Biopsy specimens were obtained with standard biopsy forceps to include the most macroscopically inflamed site with UC and immediately frozen in liquid nitrogen and stored at -80 °C for RNA and protein extraction. Meanwhile, fecal samples were collected for stool culture before and after 2 wk of treatments. Patients were assessed clinically, endoscopically and histologically after a 2-mo period of treatment or in case of relapse of UC.

Fecal samples were collected for microbiological examinations. We prepared the selective medium to incubate ten strains of luminal resident bacteria in large intestine. Enterobactera (EMB), Enterococcus (EC), Staphylococcus (SP) and Saccharomyces (yeast) (SB) are aerobes. Bacteroides (BD), Bifidobacterium (BL), Lactobacillus (LC), Peptococcus (PS), Eubacterium (ES) and Clostridium (CD) are anaerobes. 0.5 g feces in a small bottle containing 4.5 mL diluted solution and 4-5 beads were concussed 1 min on a vortex agitator, 1.8 mL diluted solution was added to each of other 7 bottles. The solution was diluted in series as 10-2, 10-3, ….10-8, respectively. Aerobes and anaerobes were observed 24 h and 72 h after incubation at 37 °C.

Preparation of cytoplasmic and nuclear extracts

Nuclear extracts from biopsy tissues were prepared by the method of Deryckere and Gannon[15]. Frozen tissue was ground with a mortar in liquid nitrogen and transferred to a tissue homogenizer. Protease inhibitor cocktail (Sigma) was added and centrifuged at 2000 r/min for 30 s. Supernatant was incubated on ice for 5 min and then centrifuged at 5000 r/min for 5 min. The final supernatant containing cytoplasmic extracts was collected and stored at -80 °C. Pelleted nuclei were then resusnded in 50-100 μL of buffer G and incubated on ice for 20 min. The lysed nuclei were then transferred to a microcentrifuge tube, centrifuged at 12000 r/min for 10 min, and the supernatant containing the nuclear extracts was collected and stored at -80 °C. Protein concentration was determined with BCA-protein estimation kit.

For each sample, an equal amount (50 μg) of protein lysates was analyzed on 100 g/L or 120 g/L sodium dodecyl sulfate-polyacrylamide gel. Proteins were electroblotted onto Immobilon PVDF membranes (Millipore, Bedford, MA), blocked in 50 g/L dry skim milk for 1 h, and then incubated with the indicated antibodies. The antibodies used were 1:700 rabbit polyclonal anti-NF-κB and IκB antibodies, the secondary antibodies used were provided in an enhanced chemiluminescence detection kit (Santa Cruz, CA ). Exposure time (5-60 s) varied with the antibodies used.

The degradation of IκB in cytoplasm was obviously inhibited by BIFICO and NF-κB in nuclei was less expressed after treatment (P < 0.05) (Figure 1, Table 2). 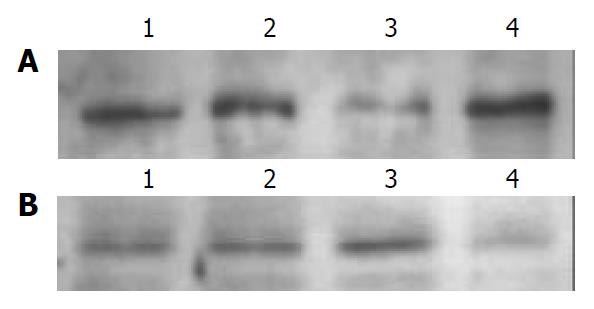 The results of EMSA showed that activation of NF-κB was elevated in patients who did not take BIFICO in comparison with pretreatment, more NF-κB was combined with special recognition sites of DNA (P < 0.05, Figure 2, Figure 3). 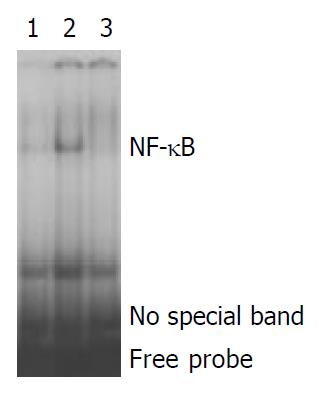 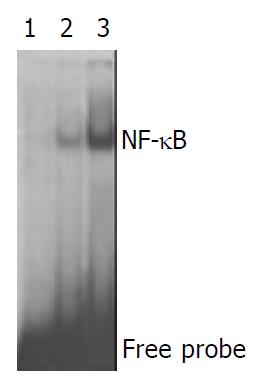 IL-1-β, TNF-α, IL-10 mRNAs in both groups were determined with RT-PCR. In control group, the level of IL-1-β, TNF-α mRNA at intestinal epithelial mucosa did not significantly decrease. (P < 0.05, Figure 4, Table 3). 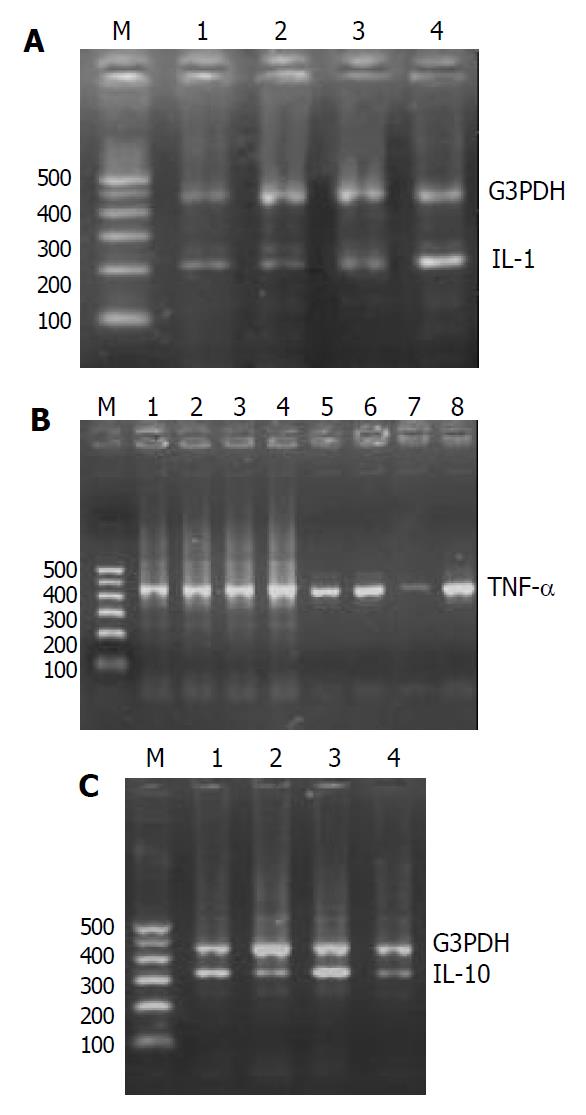 The pathogenesis of UC remains unknown. Genetic and environmental factors are obviously contributory. Luminal bacteria could play a major role in the initiation and perpetuation of chronic UC[14,19-21]. Thousand of endogenous bacteria live in the large intestine and may be an essential factor in certain pathological disorders. Animal models of UC showed that colitis did not occur in a germ-free environment. In human UC, inflammation is present in parts of the gut housing the highest concentration of bacteria. Moreover, terminal ileum, caecum and rectum are relatively static, providing prolonged mucosal contact with luminal contents. Enhanced mucosal permeability may play a pivotal role in maintaining a chronic inflammatory state due to a genetic predisposition or direct contact with bacteria or their products. So far, no specific micro-organism has been directly associated with the pathogenesis of UC. Analysis of the luminal enteric flora, however, has revealed differences in the composition of this flora to healthy controls. In UC, concentrations of Bacteroides, Eubacteria, Peptostreptococci and facultative anaerobic bacteria are increased, whereas the number of Bifidobacteria is significantly reduced. Over the past few years, use of probiotics in IBD and other intestinal disorders has gained attention. Manipulation of the colonic bacteria with antibiotics and probiotics proved to be more effective and tolerable than immunosuppressants[11,22]. Probiotics and prebiotics have a role in prevention or treatment of some diseases. The mechanisms through which dysregulation may play a central role in initiation and perpetuation of inflammatory bowel disease were discussed[23]. BIFICO probiotic capsule was used for Enterococci, Bifidobacteria, Lactobacilli triple viable bacteria, probiotics such as VSL#3 could also be used to maintain clinical remission and prevent relapse in patients with relapsing or chronic pouchitis. Therapy with anti-inflammatory agents and immunomodulators were often required for patients with chronic pouchitis resistant to antibiotics[24,25]. Probiotic Lactobacillus rhamnosus GG (LGG) has proved to be beneficial to the treatment of viral- and antibiotic- associated diarrhea. Nitric oxide (NO) is involved in the protective mechanisms in the gastrointestinal tract and may contribute to some of the beneficial effects of probiotics. LGG induces NO production in J774 macrophages and in human T84 colon epithelial cells through induction of iNOS by a mechanism involving activation of transcription factor NF-κB. Induction of iNOS and low-level synthesis of NO might be involved in the protective actions of LGG in the gastrointestinal tract[26]. Recent results supported the concept that intestinal bacteria could induce endogenous signals that play a pathogenic role in hepatic insulin resistance and NAFLD and suggest novel therapies for these common conditions[27,28]. We discovered that the high concentration of Gram-positive bacteria in luminal flora could effectively prolong the time of relapse of ulcerative colitis.

It is well known that transcriptional factor NF-κB plays a pivotal role in expression of LPS-induced inflammatory factors. Because NF-κB activation could lead to enhanced expression of proinflammatory cytokines, chemokines, inflammaroty enzymes such as inducible NO synthase (iNOS) and cyclooxygenase (COX-2), adhesion molecules and inflammatory receptors[29], modulation of NF-κB activation might provide a direct way to inhibit inflammatory mediators[30]. Activation of NF-κB is triggered by phosphorylation of an inhibitory subunit, IκB. In unstimulated cells, NF-κB is sequestered in the cytoplasm through interaction with IκB a and IκBa inhibitory proteins. In response to proinflammatory stimuli , IκB is first phosphorylated in its N-terminal domain by a large multi-kinase complex, then polyubiquitinylayted, and finally degraded by the proteasome. The released NF-κB complex could translocate into the nuclei where it initiates gene transcription upon binding to its cognate DNA motifs in regulatory segments of TNF-α gene and other target genes involved in inflammatory and immune process[31]. At the same time, we also detected the effect of probiotics on the initiation and perpetuation of inflammation. The expressions of IκB in cytoplasm and NF-κB in nuclei were detected by Western blot. The result manifested that probiotics efficaciously inhibited the degradation of IκB protein. Less NF-κB translocation into nuclei could be detected by Western blot in treatment group. Activation of NF-κB was analyzed by EMSA, the result likewise manifested that much more NF-κB proteins were significantly activated in control group than in probiotics group.

Recent data have demonstrated that mucosal immune response is involved in patients with IBD. The nuclear transcription factor NF-B is a key regulator of inducible expressions of many genes involved in immune and inflammatory responses in the gut. Stimuli like oxidative stress, cytokines (IL-1, IL-6, TNF-alpha), bacteria and viruses can release NF-κB from their inactive cytoplasmatic form to the nuclei. Inhibitory cytokines can prevent the activation of NF-κB. More potent and selective treatment strategies with anti-sense p65, proteasome inhibitors and viral I kappa B alpha expression vectors have been aimed to prevent NF-κB activation in mucosal macrophages and T lymphocytes. However, NF-κB regulated genes are also involved in survival responses of epithelial cells. Selective inhibition of NF-κB activation in inflammatory cells could be an option in management of IBD[32-35]. In our study, the expression of proinflammatory cytokines such as TNF-α, IL-1β influenced by the activation of NF-κB obviously were inhibited by probiotics and mRNA expression of anti-inflammatory cytokine IL-10 was elevated by the effect of probiotics.

In conclusion, supplementation with probiotics is helpful in maintaining remission and preventing the relapse of UC.