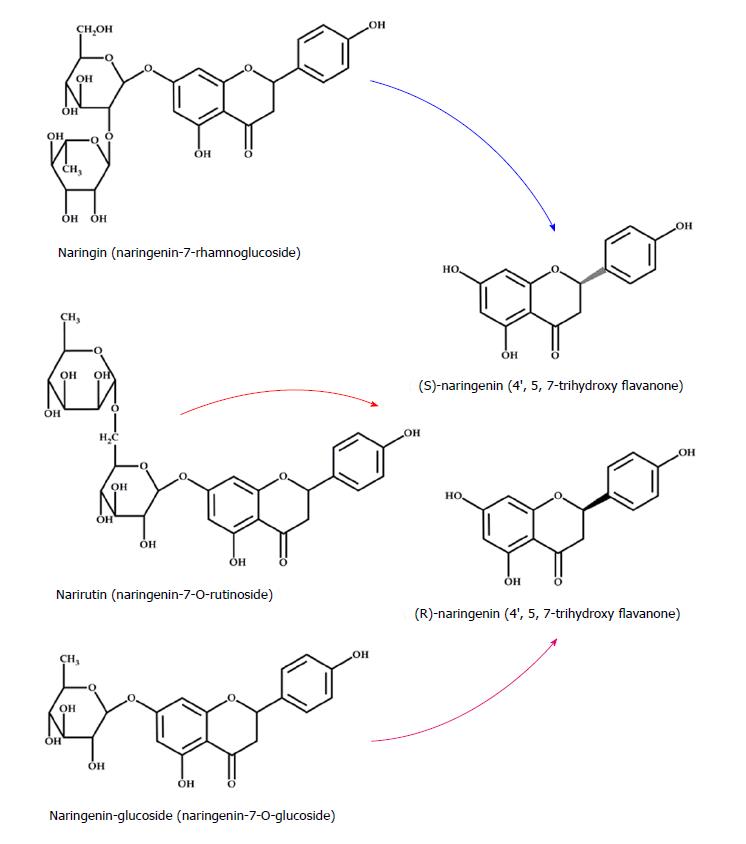 Figure 2 Absorption and metabolism of naringenin. Small intestine: Naringenin (N, orange arrows) is absorbed through the intestinal epithelium by passive diffusion into enterocytes; then, it can pass to general circulation by multidrug resistance associated proteins (Mrp1) or transported by active efflux protein carriers P-glycoprotein (P-gp) and Mrp2, back to the intestinal lumen, out of the enterocytes. Inside the enterocyte, naringenin is glucuronized by UDP-glucuronosyl transferase (UGT), and after that, naringenin-glucuronides (red arrows) leave cells by Mrp2 protein or pass into blood via breast cancer-resistant protein (Bcrp1). Moreover, naringenin-glucuronides can be cleaved by β-glucuronidases (GUSB), resulting in release of the aglycone. Large intestine: Naringenin undergoes same processes as in small intestine but also is highly metabolized by Streptococcus S-2, Lactobacillus L-2, and Bacteroides JY-6 to generate a series of low molecular weight aromatic acids. Liver: Naringenin is highly conjugated to form naringenin-glucuronides, which allows it to pass into circulation. On the other hand, naringenin-glucuronides reach the liver from intestine and enter into hepatocytes via organic anion transporting protein-B (OATP), and then, they are transported by Mrp3 into the circulation. 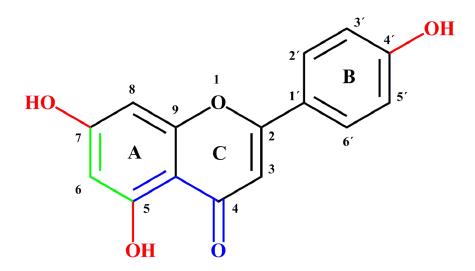 Figure 3 Naringenin antioxidant activity-structure relationship. In red: Hydroxyl substituents (OH) that have high reactivity against reactive oxygen species and reactive nitrogen species. In green: 5,7-m-dihydroxy arrangement in the A-ring serves to stabilize the structure after donating electrons to free radicals. In blue: The association between 5-OH and 4-oxo substituents contributes to the chelation of compounds such as heavy metals. 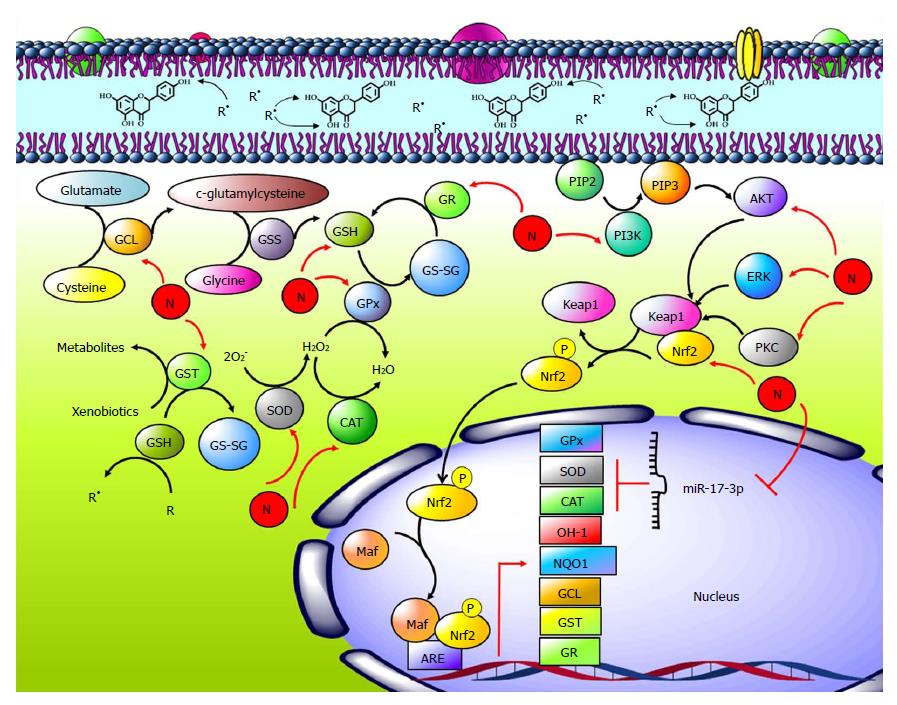 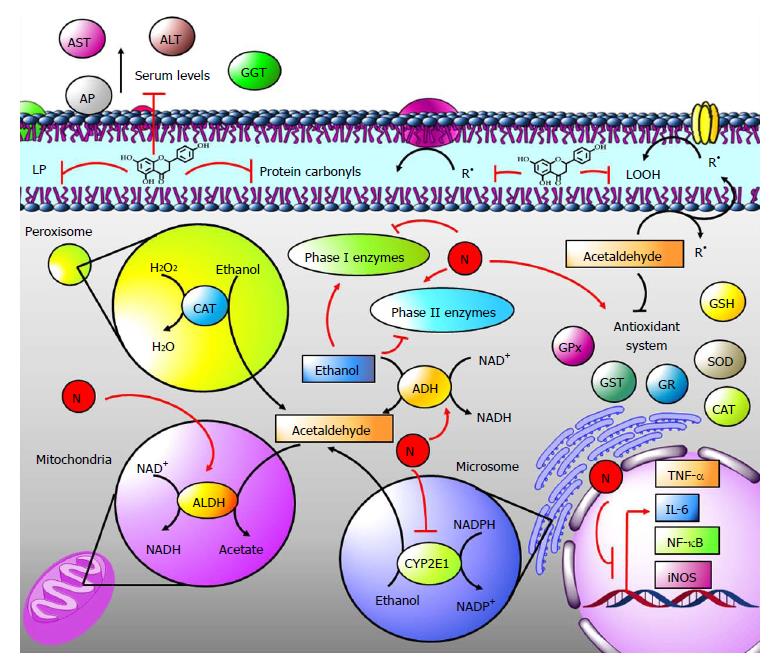 Figure 5 The role of naringenin in alcohol-induced liver damage. Alcohol metabolism: In the cytosol, alcohol is converted into acetaldehyde by alcohol dehydrogenase (ADH); it is also formed in microsomes by CYP2E1 and in peroxisomes by catalase (CAT). In mitochondria, acetaldehyde dehydrogenase (ALDH) transforms acetaldehyde to acetate. Ethanol elevates ADH and CYP2E1 activities but decreases ALDH activity, resulting in toxic acetaldehyde accumulation, free radical (R•) formation in the form of lipid hydroperoxides (LOOH) or protein carbonyls and resulting in the elevation of lipid peroxidation (LP). Naringenin (N) increases the activities of all those enzymes, which results in alcohol efficient elimination leading to endogenous antioxidant system restoration, oxidative stress prevention and balance of phase I and phase II xenobiotic metabolism enzymes. Naringenin also prevents increased levels of alkaline phosphatase (AP), aspartate aminotransferase (AST), alanine aminotransaminase (ALT), and γ-glutamyl transferase (GGT) as well as inflammation during alcohol-mediated liver damage. 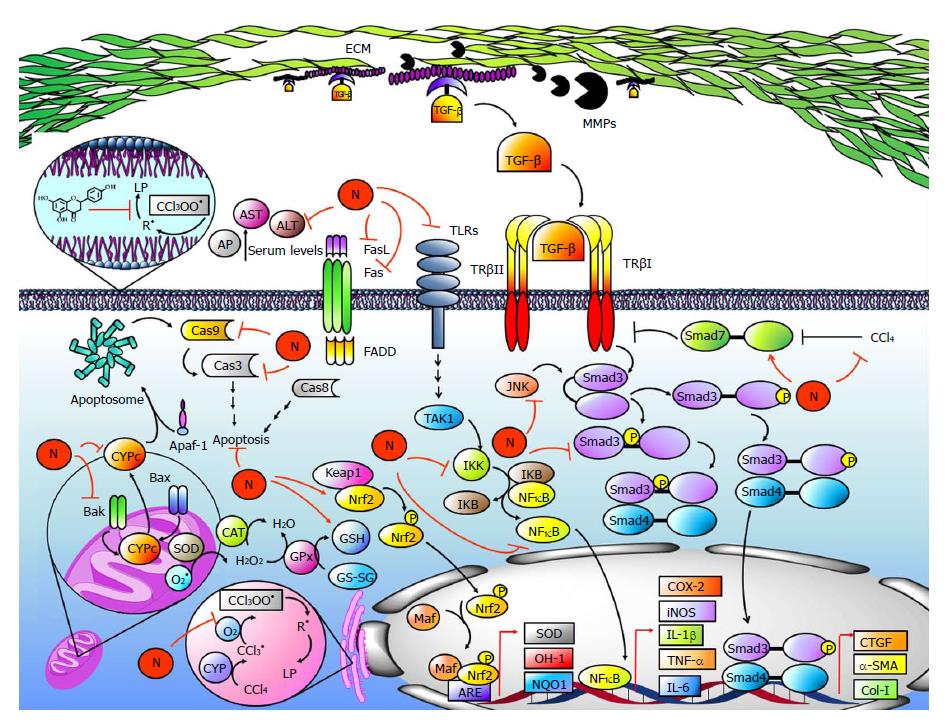 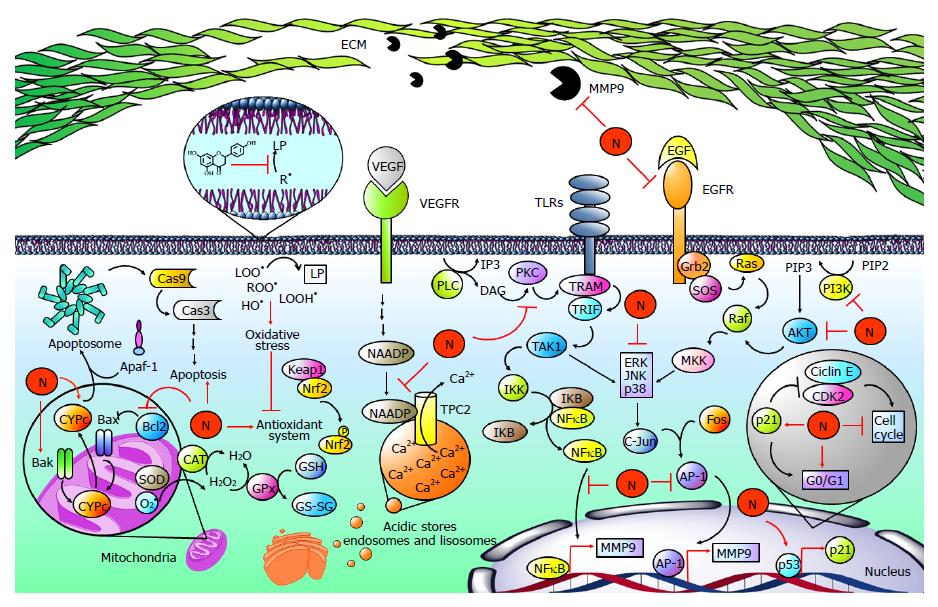 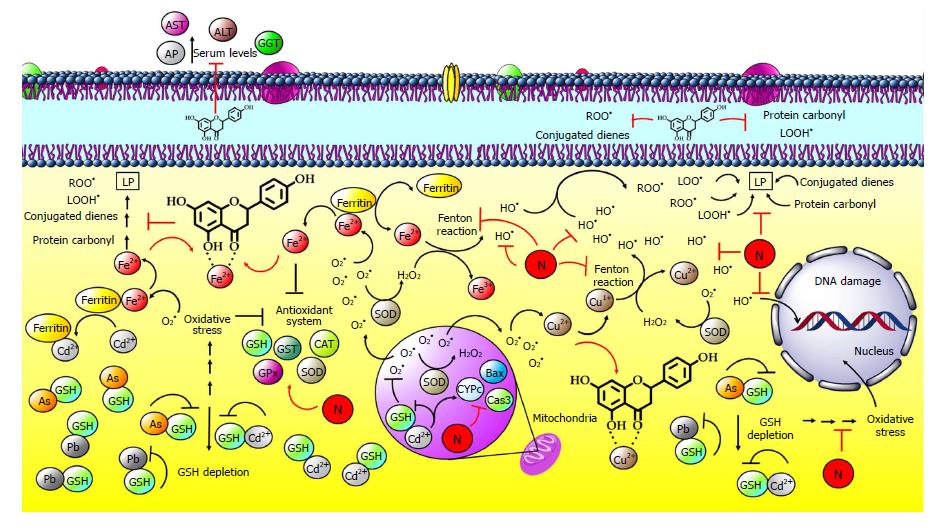 Figure 8 Naringenin inhibits hepatic damage induced by heavy metals. Heavy metals can be classified according to the mechanism of action in redox-active metals such as iron (Fe) and copper (Cu) or redox-inactive metals such as cadmium (Cd), arsenic (As) and lead (Pb). One of the main free radicals is superoxide radical (O2•); normally, it is produced by NADP oxidase, and then, it is neutralized by superoxide dismutase (SOD), generating hydrogen peroxide (H2O2). Intracellular Fe is releases from ferritin by O2•; next, free Fe reacts with H2O2 in the Fenton reaction, generating high amounts of hydroxyl radicals (OH•). After that, OH• attacks double bonds of DNA bases. In the case of lipids, free Fe produces lipid peroxidation (LP) through peroxyl radicals (ROO•), producing lipid hydroperoxides (LOOH•), conjugated dienes and protein carbonyl. Regarding Cu, once inside the hepatocyte, Cu ion (Cu2+), can be reduced to cuprous ion (Cu1+) when reacting with O2•; then, it mediates H2O2 decomposition in OH•via the Fenton reaction. These processes result in hepatocyte and liver damage. Naringenin can chelate these metals, preventing their participation in the Fenton reaction; naringenin also inhibits oxidative stress by its antioxidant capacity and by promoting the endogenous antioxidant system. On the other hand, redox-inactive metals such as Cd, arsenic (As) and lead (Pb) form complexes with thiol groups, such as glutathione (GSH), in the cytoplasm and mitochondria. GSH level reduction, GSH inactivation, and GSH system deregulation increase metal toxicity. In addition, Cd can replace Fe and Cu in ferritin or apoferritin; thus, free Fe and Cu ions cause oxidative stress via the Fenton reactions and elevation of BCL2-associated X protein (Bax), Caspase 3 (Cas3) and cytochrome (CYPc) proapoptotic proteins. Naringenin improves the antioxidant system by increasing SOD, catalase (CAT), glutathione peroxidase (GPx), glutathione transferase (GST) enzymes and GSH levels. 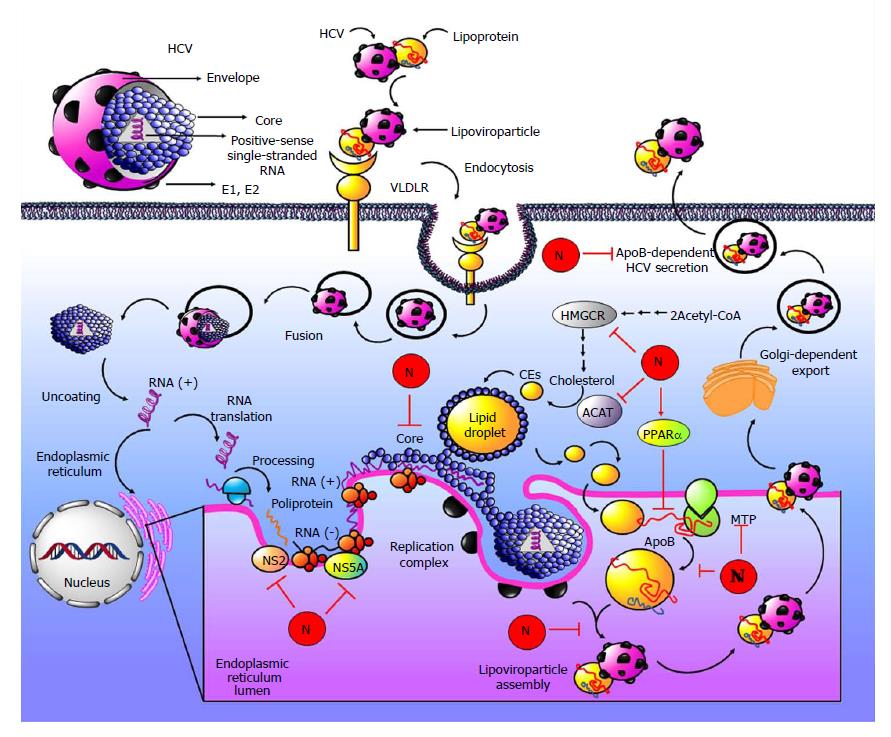 Figure 9 Antiviral properties of naringenin. The Hepatitis C virus (HCV) genome consists of a positive-sense single-stranded RNA. HCV adopts an icosahedral structure with a lipid envelope and glycoproteins E1 and E2 immersed in the envelope. Underneath the envelope is the nucleocapsid, which is composed of multiple copies of core forming the internal viral coat that encapsulates the genomic RNA. HCV may be associated with lipoproteins such as very-low density lipoprotein (VLDL), forming a lipoprotein complex called lipoviroparticle. Binding of lipoviroparticle to very-low density lipoprotein receptor (VLDLR) results in virus endocytosis; after that, nucleocapsids are deposited into the cytoplasm. Then, nucleocapsids are uncoated, and the RNA is released. The genomic RNA is translated to the endoplasmic reticulum when HCV polyprotein is produced. The positive-stranded RNA genome is used as a template for synthesis of negative-stranded RNA; this new viral RNA is encapsulated within multiple copies of the core to form the nucleocapsid, and then, it acquires envelope and HCV virions, which are exported out of the cell in a Golgi-dependent manner. Naringenin inhibits the secretion and assembly of HCV through regulating lipid metabolism via 3-hydroxy-3-methylglutaryl CoA reductase (HMGCR), and acyl-coenzyme A: cholesterol acyltransferase (ACAT) inhibition. Cholesterol is synthetized in an HMGCR-dependent pathway; it is the rate limiting enzyme for cholesterol synthesis, and then, cholesterol is converted to cholesteryl esters (CEs) by ACAT. CEs are very important to VLDL assembly. In addition, microsomal triglyceride transfer protein (MTP) catalyzes the transfer of lipids to the apolipoprotein (Apo) B-100 ApoB100; if the ApoB-MTP binding is inhibited, VLDL assembly in inhibited. Reduction in the bioavailability of CEs, triglycerides and cholesterol by naringenin reduces MTP activity and apoB-MTP binding. In addition, naringenin decreased intracellular triglycerides through peroxisome proliferator activated receptor alpha (PPARα), a regulator of lipid metabolism. Through these mechanisms, naringenin leads to a reduction in VLDL assembly and to the inhibition of ApoB-dependent HCV secretion. Additionally, naringenin inhibits viral NS5A protein, a multifunctional HCV nonstructural protein. Furthermore, naringenin could be an NS2 protease and core protein inhibitor.