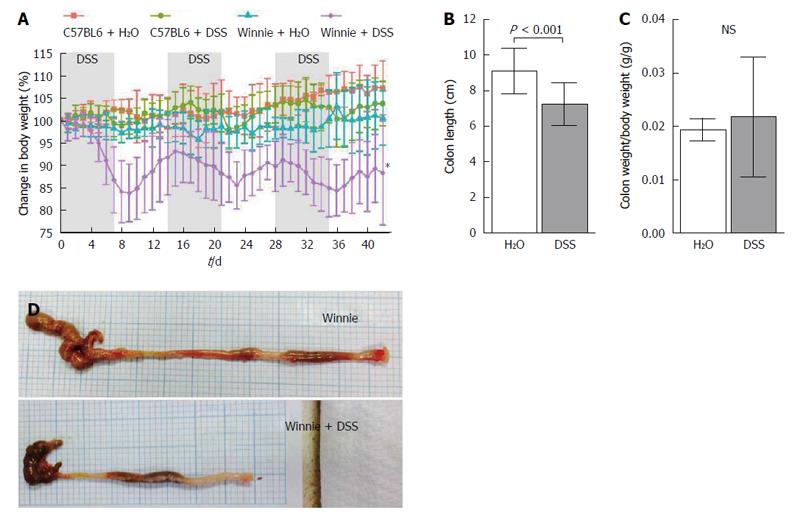 Figure 1 Clinical features of dextran sulphate sodium-induced colitis in Winnie. A: Daily change in body weight of wild-type; B: Winnie mice during the three cycle experimental dextran sulphate sodium (DSS) regimen. Body weight was recorded each day and recorded as percentage change from the starting body weight prior to commencement of the experiment (day 0). Each point represents the mean percentage change in body weight relative to the initial body weight (n = 4). Error bars depict standard deviation (SD) from the mean. Asterisk signifies difference (P < 0.05) between control Winnie mice and Winnie mice exposed to DSS; C: Mean colon length at termination. Error bars depict SD from the mean; D: Gross appearance of the Winnie colon at termination. Representative images of Winnie colon after receiving three cycles of water only (top) and the colon of Winnie receiving three cycles of DSS (bottom). 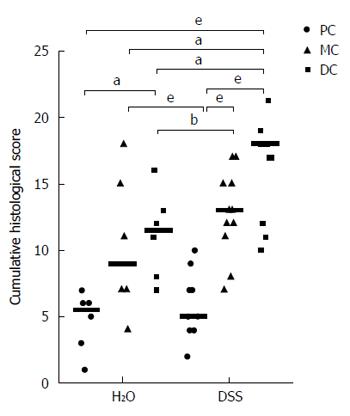 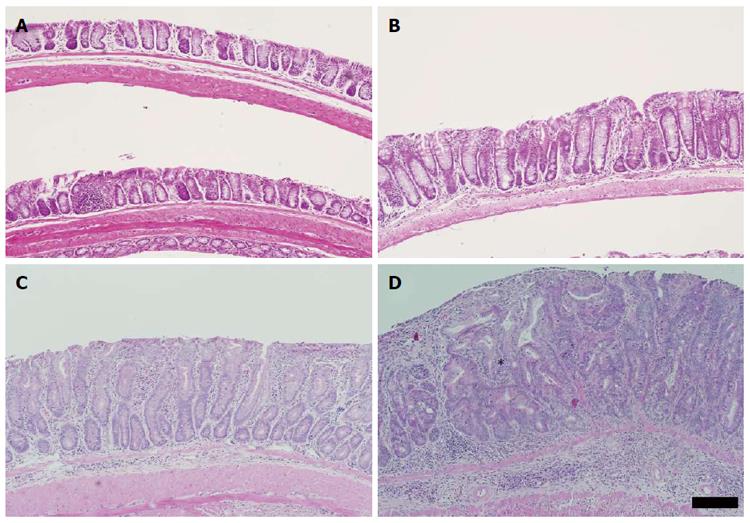 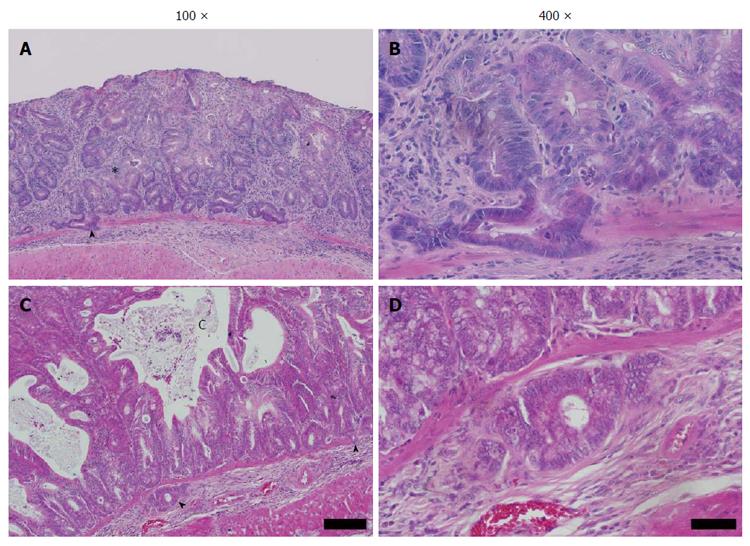 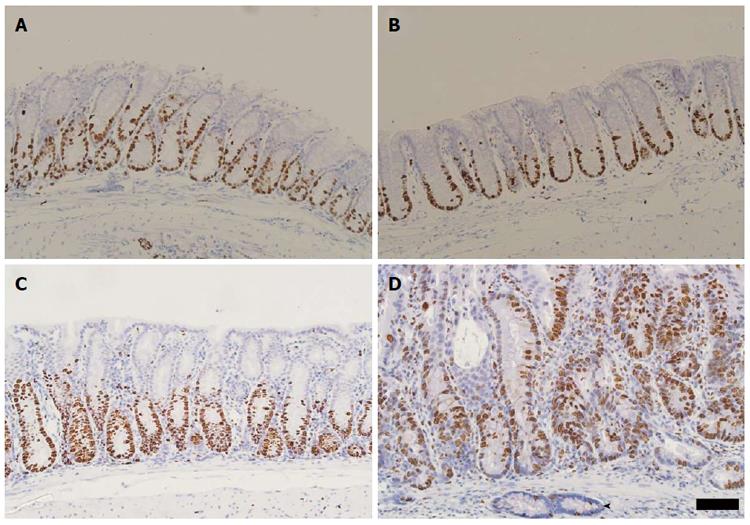 Figure 6 Localisation of β-catenin in Winnie distal colonic mucosa. A: Representative image of Winnie distal colon of the six animals without DSS exposure immunostained for β-catenin. B-catenin in the colonic epithelium is primarily associated with the epithelial cell membrane; B: Immunostained dysplastic distal colonic mucosa from a Winnie mouse exposed to three cycles of DSS (representative of n = 11). B-catenin localised to the cell membrane of epithelial cells without any nuclear accumulation. Scale bar is equivalent to 100 μm. 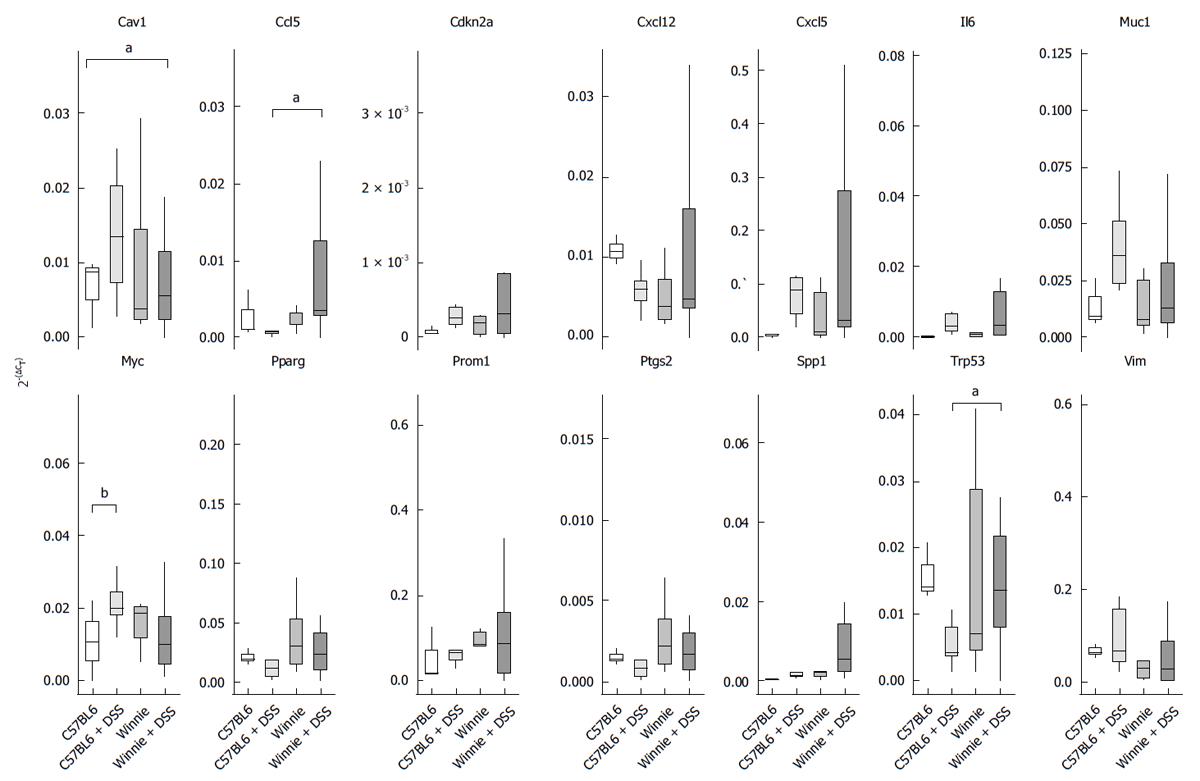 Figure 7 Relative transcript abundance of genes regulating inflammation and cell proliferation. Transcript abundance measured from 25 ng of template based on the linearised 2-ΔCT method, where each gene of interest was normalised to the relative abundance of a reference gene (Gapdh). Box plot depicts interquartile range (IQR) either side of the median for each combination of treatment and genotype (3-11 mice per group). Whiskers represent 1.5 IQR approximately equivalent to 5%-95% confidence intervals. aP < 0.05, bP < 0.01.